Environmentally sensitive tourism approach taps into rising demand for adventure and eco-tourism in one of the safest states in the country: Chiapas 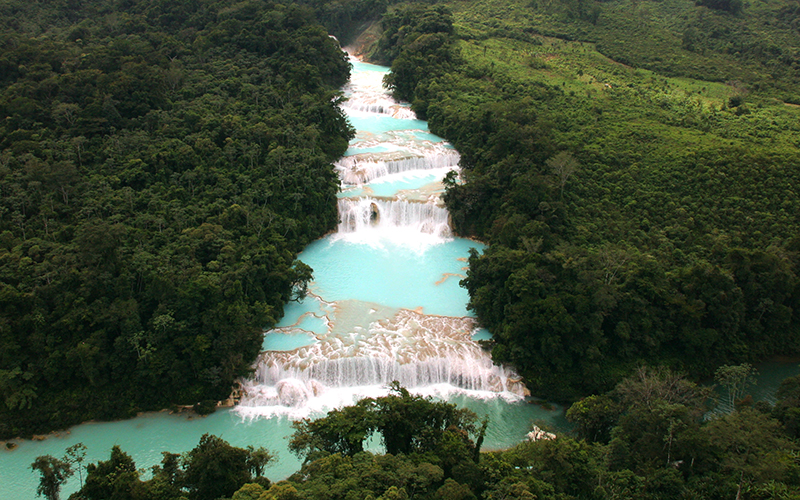 A SERIES OF MAGNIFICENT BLUE-WATER FALLS, THE CATARATAS DE AGUA AZUL CUT THROUGH DENSE GREEN RAINFOREST IN SOUTHERN CHIAPAS AND INCLUDE A 120FT DROP AT MISOL-HA
SHARE

The southernmost state of Mexico, Chiapas is the “green lung” of the country. Its rich, fertile lowland was once home to the Mayas, one of the most fascinating pre-Columbian civilizations, which spread from the Yucatán peninsula to Guatemala and Belize.

To this day, people of Chiapas, including direct descendants from the ancient Mayas, revere nature perhaps more than many of their fellow countrymen. Indeed, they elected in 2012 as governor a member of the Green Party (Partido Verde Ecologista Mexicano, PVEM), Manuel Velasco Coello. As expected, the protection of the environment and sustainable development are high on his agenda. For example, Chiapas is a world leader in organic coffee production – it is the leading producer of coffee of Mexico, with 40% of the total production.

Having a cup of locally grown organic coffee is not a bad way to start a journey into Chiapas, for instance in one of the hip cafes of San Cristóbal de Las Casas. Nestled in the mountains, it is refreshingly cool and surprisingly trendy. It is also home to a large Mayan community, who still live by their age-old customs and beliefs as do their brothers all around Chiapas.

A few miles from San Cristóbal you can immerse yourself in a thriving contemporary Mayan community in the town of San Juan Chamula. Here, the local church has been converted into a native sanctuary after the priest was expelled decades ago for trying to impose on the locals the Catholic catalogue of do’s and don’ts. Now, Mayan spiritual leaders perform ceremonies in the church itself, where the pews and the altar have been removed.

Some 180 miles away sits one of the most breathtaking sites of the whole of Mexico, the sanctuary of Palenque, a UNESCO World Heritage Site. The grey pyramids emerging from the jungle make it “one of the most outstanding Classic period sites of the Maya area” according to UNESCO and attest to “the creative genius of this civilization”, which was initially established circa 2000 BC and reached its peak between 500 and 700 AD.

The Mayan empire collapsed around the 10th century for reasons that are still unclear (war, diseases, environmental catastrophes are all cited as possible causes), but the Maya people managed to survive the Spanish conquest and to preserve some of their customs into modern-day Mexico.

Although it is not as popular as other world-renowned sites such as Chichen Itza (Yucatán) and Teotihuacán (State of Mexico), Palenque’s reputation is, unsurprisingly, growing. “Because of the investment and development under way there, notably the new international airport, it is becoming one of the most important destinations in Mexico,” says Mr. Velasco Coello.

From Palenque, it is quite easy to reach paradise, or so it seems when discovering the waterfalls of Misol-Ha and the nearby translucent Cataratas de Agua Azul (blue-water falls) 42 miles away from Palenque, in the heart of the Lacandon jungle.

Another Maya site near Palenque that should not be missed are the twin ruins of Yaxchilán and Bonampak. The latter contains striking murals whose vivid colors of red, turquoise and yellow have been amazingly preserved in spite of the damp jungle environment.

There are many other things to see in Chiapas but with this selection, visitors will have a good idea of what this place is about. Quite a far cry from the tired clichés about Mexican culture.

The governor is on a mission to make his state better known. “We have great tourism potential, which we are developing. We have demonstrated that Chiapas is a safe state not only for vacations but also for investment,” says Mr. Velasco Coello. Indeed, in 2011, the administrative capital of Tuxtla Gutiérrez was the first in Mexico to be certified “safe city” by the federal government and by the independent Karolinska Institute of Sweden, due to its very low crime rate.