U.S.-China: Battle for Africa comes to fore in Angola

The U.S. government and American companies are eager to make up the ground lost to China in Africa during recent years. Angola has become a key battleground in this struggle for economic influence on the continent. 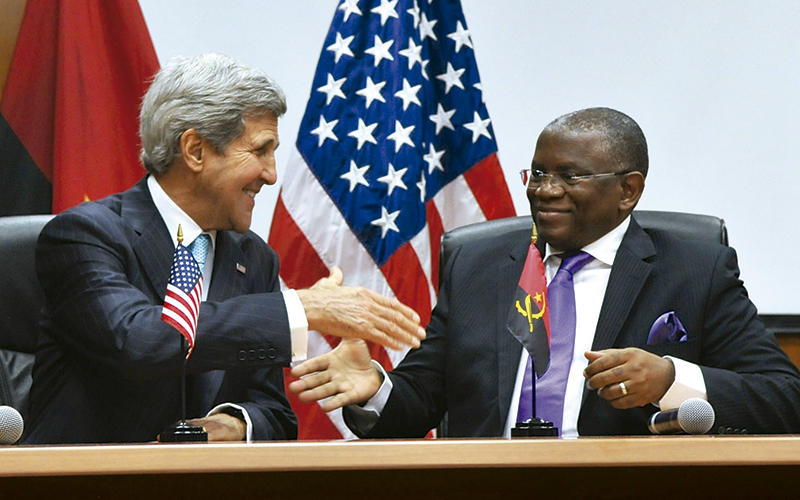 ANGOLAN FOREIGN MININTER GEORGES CHIKOTI (R.) WITH U.S. SECRETARY OF STATE JOHN KERRY DURING THE LATTER’S VISIT TO ANGOLA IN MAY, 2014.
SHARE

Given China’s insatiable thirst for Africa’s natural resources over the past decade, it came as no surprise in 2009 when the Asian giant overtook the United States as Africa’s leading trading partner. Total trade between China and Africa stood at around $200 billion in 2012, nearly double the $109 billion between the U.S. and the continent during the same period. On a trip to Africa earlier this year – which included a stop-off in Angola – Chinese Premier Li Keqiang said he expects Sino-African trade to double in the next six years.

The investment landscape has also changed drastically. While the United States, the United Kingdom and France still hold the largest share of investments in Africa, China’s stake in the continent is growing significantly, particularly in energy and infrastructure. State-owned and private Chinese companies have become major investors, spending nearly $100 billion in projects in Africa over the last decade.

The U.S. government and businesses are now pushing to make up the ground lost to China in Africa in recent years and to regain their dominant position. Last year, many media reports pointed to Barack Obama’s first official visit to the continent as a clear signal of this intent, as was his decision to hold the first African Leaders Summit in Washington in August, 2014. This push has sparked what has been dubbed the “battle for Africa” between the world’s two largest economies – and Angola has become one of the major battlefields.

The changing trade and investment landscape in Angola reflects that of Africa as a whole. China is now Angola’s largest commercial partner; bilateral trade reached $37.5 billion last year, according to figures from the Chinese embassy. With large investments in infrastructure and energy, Angola has become the number one destination for Chinese investment in Africa.

The total value of trade between the U.S. and Angola was $10.2 billion in 2013 , making it Angola’s second largest commercial partner – overtaking the former colonial master Portugal – mainly due to oil imports. Between 2003 and 2011, the United States invested close to $25 billion in Angola, according to a report by consultants Ernst & Young; the largest part of this investment has come from oil and gas companies such as ExxonMobil and Chevron.

The US-China battle for influence in Angola came to the fore earlier this year when in May, U.S. Secretary of State John Kerry and Chinese prime minister Li Keqiang touched down in Luanda within just a few days of each other. Both were eager to discuss expanding commercial ties with President José Eduardo dos Santos, who sees the two countries as strategic partners, along with Brazil and Portugal.

With the emergence of the shale gas industry in the U.S., demand for Angolan oil will continue to fall at a time when China takes more than 40% of Angola’s petroleum and gas exports. Kerry wants to see commercial ties move beyond oil and gas. A renewed and modernized African Growth and Opportunity Act – which has facilitated the significant increase in trade ties with Sub-Saharan Africa since its establishment 2000 – could help to make this happen.

“Angola’s economy has experienced, and continues to enjoy, a remarkable amount of economic growth,” Kerry said during his visit in May. “We talked about increased possibilities of cooperation in agriculture, in technology, in energy diversity, and also in infrastructure.”

The Secretary of State commented that his trip was also an opportunity to repair diplomatic ties, damaged as result of a number of cancelled meetings, Obama’s decision not to visit the country on his African tour in 2013, and the U.S.’s historic support for rebel leader Jonas Savimbi, whose death in 2002 led to the end of the Angolan civil war. While support for Savimbi had come mainly from the conservatives (Ronald Reagan invited Savimbi to the White House in 1987 and hailed him a “freedom fighter”), it was President George W. Bush who first invited President Dos Santos to Washington in 2002 following Savimbi’s death. At the meeting, both leaders agreed to put political differences aside to advance commercial ties.

Relations were further strengthened in 2009 when then Secretary of State Hilary Clinton made a working visit to Luanda, where she announced that Angola was one of America’s strategic partners in Sub-Saharan Africa. This led to the signing of a strategic partnership agreement in 2010, which paved the way towards deeper commercial and diplomatic ties, as well as expanded cooperation in agriculture and the strengthening of democratic institutions.

Apart from trade and investment, China’s financial institutions have provided loans worth $14.5 billion since 2002. Now the United States is keen to get in on the act. This year alone, the U.S. Export-Import (Ex-Im) Bank has recently signed two major loan deals worth $1.7 billion – American money which will be used to finance deals with American companies.

The first loan, for $600 million, will finance the acquisition of three Boeing aircraft for Angola’s national carrier, TAAG. The second, for $1.1 billion, will pay for purchases from General Electric (GE) of locomotives and of electrical power equipment.(The latter is part of Obama’s Power Africa initiative, announced last year, which will invest $7 billion to increase access to electricity in Sub-Saharan Africa).

“U.S. exporters are eager to realize the tremendous opportunities in this region, and the bank is helping them create and sustain American jobs by increasing their exports to Africa,” declared CEO of Ex-Im Bank Fred   Hochberg during his three-day visit to Angola in June.

Pedro Godinho Domingos, Executive Director of the U.S-Angola Chamber of Commerce, has said that he would like to see more U.S. financial institutions enter Angola. “We are trying to invite American banks into the market. We want to create links with big financial (institutions) like Bank of America, Citibank and JP Morgan. We had a meeting with the governor of the central bank; he said that they are open to it, and the US banks would be welcome,” he explained in an interview with The Worldfolio.

The loans provided by Ex-Im Bank for power and transport infrastructure are part of a growing trend of U.S. investments outside of oil and gas. “There are an increasing variety of companies coming in,” U.S. Charges d’Affairs to Angola Heather Merritt said. “For those able to overcome some of the barriers to entry and the costs of doing business here, it has been a very rewarding market. That is why you see GE here, as well as John Deere Dealership, and that is why Microsoft has opened an office here.”

“We are looking at ways for U.S. companies and the U.S. government to continue to support Angola’s energy development – not just oil and gas, but distribution and generation and different ways we can get involved, as well as new technologies. There is definitely room here for hydro and solar, and wind,” she said.

Ms. Merritt also highlighted that the U.S.’s involvement in Angola goes far beyond commercial interests. The work of U.S. Agency for International Development (USAID) and the social responsibility initiatives of U.S. corporations like ExxonMobil have focused on the fight against AIDS and malaria, through programs such as the President’s Malaria Initiative. USAID has also contributed to education development and the strengthening of local governance by helping municipal governments’ budgeting processes.

The U.S. has played an instrumental role in the post-war clean-up, particularly in the area of demining. “We have been doing this for around twenty years and we have spent billions in Angola helping clear out the remnants of war. This year we are spending about 6 million, and we are working with three NGO partners,” Ms. Merritt told The Worldfolio.

Despite the claims of that the U.S. has a “lack of strategy” in Africa, the Charge d’Affairs argues that President Obama’s Power Africa Initiative, his trip to Africa last year, and his decision to host the first African Leaders Summit in Washington are all evidence of “a very clear, well-articulated strategy for Africa.”

She added Angola is a key part of this policy and that, along with South Africa and Nigeria, is regarded as one of the United States’ three strategic partners in Africa.