200 More Years of Engagement with the United Kingdom

After celebrating 200 years of official friendship last year, Bahrain and the UK are working towards deeper cooperation, from trade and investment to security and defence. Momentum is building as the two nations work in concert to shoulder their shared challenges and explore new opportunities 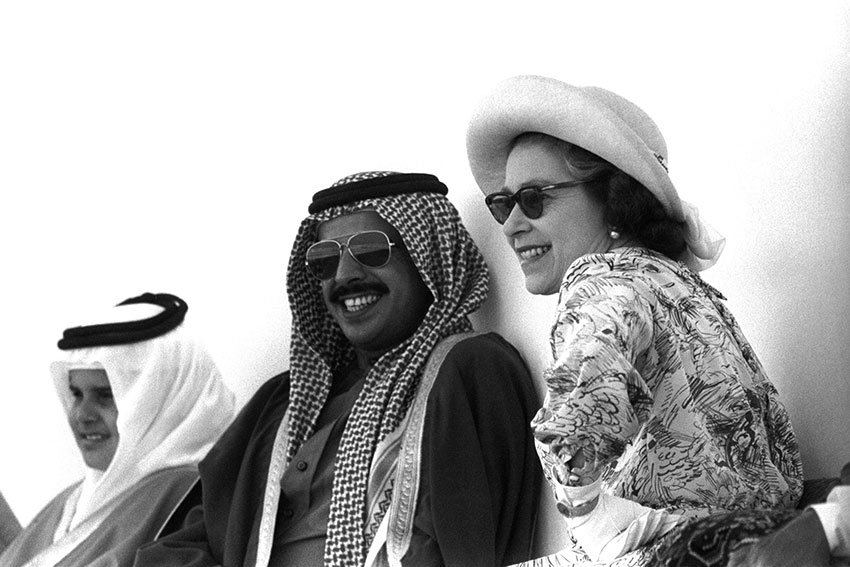 QUEEN ELIZABETH II AT THE RACES IN BAHRAIN IN 1979
SHARE

The Bahraini-British relationship is one of the oldest and closest in the Gulf, spanning two centuries of mutually supportive ties in trade, military cooperation and investment. Treaty relations date back to 1816, when the then British political resident William Bruce signed a pact with Sheikh Al Khalifa guaranteeing British neutrality in the ongoing conflict between Bahrain and Oman. This established formal relations between both countries and was followed in 1861 with a “Perpetual Truce of Peace and Friendship”, which cemented Britain’s diplomatic, political and economic links with the Gulf kingdom.

Since then, each nation has been an important part of the other’s development across economic, political, and cultural spheres and, while reflecting on past achievements in a multitude of bilateral meetings, their leaders are looking forward to what can be achieved in the next two centuries of partnership.

“Bahraini-British relations of more than 200 years are deep-rooted and characterised by their specificity due to the strong cooperation, outstanding relations and mutual understanding and coordination regarding various regional and international issues,” said HM King Hamad bin Isa Al Khalifa during a bilateral meeting with British Deputy Foreign Secretary Sir Alan Duncan.

Speaking on board the HMS Defender at the start of the bicentenary celebrations, First Deputy Prime Minister Crown Prince Salman bin Hamad Al Khalifa said that the British-Bahraini friendship is “a relationship committed to mutual respect and a shared pursuit of safety, stability and prosperity for our peoples,” adding that “It is particularly apt that we begin our celebrations aboard the impressive HMS Defender, as strong naval ties have underpinned our 200-year relationship.” “Bahraini-British relations of more than 200 years are deep-rooted and characterised by their specificity due to the strong cooperation, outstanding relations and mutual understanding”

These naval ties are once again in focus following the November 2016 opening of the £30 million British HMS Juffair Naval Base in Manama. Inaugurated by the Prince of Wales, it is the first major naval base opened by Britain in the east of the Suez Canal since 1971, and represents a recognition by the UK of the region’s growing global importance. Indeed, the Maritime Component Command (UKMCC) houses the largest concentration of the Royal Navy outside British waters, with over a dozen ships and 1,200 personnel, which will work to further the two countries’ joint agenda in combatting terrorism, extremism and intolerance in the region.

During the December 2016 Gulf Cooperation Council, British Prime Minister Theresa May reiterated the increasing importance of ties between the UK and the Gulf States. “I think that Gulf prosperity and Gulf security is our prosperity and security,” she said, adding that the Gulf “is a special market for the United Kingdom…I am determined that we should do everything possible to build on this and elevate our trade and investment to an even more ambitious level.”

But it is not just Bahrain’s strategic geographic position which makes it the UK’s partner of choice. The Kingdom’s pro-business regulatory environment and initiatives for facilitating inward investment and foreign businesses have drawn numerous major UK firms to its shores, such as HSBC, National Express and Standard Chartered. “British investments are always welcome in the Kingdom of Bahrain amid its available opportunities and promising sectors for that,” said Bahraini Prime Minister Prince Khalifa bin Salman Al Khalifa.

“[Bahrain] has a very pro-business regulatory environment, which should encourage numerous major UK firms to set themselves up in the kingdom,” says Khalid Rashid Al Zayani OBE, Chairman of the Bahrain British Business Forum.

Formed in 1995, the Forum promotes Bahrain as the regional centre to conduct business throughout the Middle East. “UK firms should not see Bahrain as a single market but an entry point for the rest of the GCC,” adds Mr Al Zayani.

So far, Bahrain counts 500 British brands, 90 British company branches, and 350 Bahraini-British business partnerships in its banking, accounting, retail, transport, industry and legal sectors, but investment flows go the other way, too. “It is hard to overstate the level of investment in the London property market by Bahraini investors, both private as well as institutional,” says Simon Martin, British ambassador to Bahrain, pointing to recent investments into companies such as Envirogen in the UK, and successful Bahraini ownership in companies like McLaren.

Bahraini investment also helps London to achieve its aim to remain the world’s leading financial centre post-Brexit. “It is clear that Bahraini businesses do realize the importance of the UK. If the confidence in London as the hub of Gulf business in Europe was not so strong, we would be seeing people looking to take the opportunity to move elsewhere. But we are seeing quite the opposite,” says Ambassador Martin.

Commerce between the two kingdoms is growing at breakneck speed, with bilateral trade between Bahrain and the UK generating £432 million in 2015 alone, an increase of 35 per cent on the previous year. Meanwhile, in the political sphere, Britain has been arguably the most consistent state in supporting Bahrain’s reform process. In 2011, former assistant commissioner of the Metropolitan Police John Yates, travelled to Bahrain to reform its police force, and in 2012, the UK’s package of technical assistance to support reform began. Much of it has focused on building effective and accountable institutions, strengthening the rule of law and police and justice reform. Beneficiaries of the UK’s support include independent human rights and oversight institutions such as the National Institution of Human Rights, Ministry of Interior Ombudsman, Prisoners’ and Detainees’ Rights Commission and Special Investigations Unit, which provide independent oversight of police behaviour and detention standards. The Gulf state’s progressive constitution now enshrines the freedoms and rights of all faiths and ethnicities, and Bahrain has made great strides in empowering women.

While British-Bahraini economic, political and trade cooperation continues to grow, it is the people-to-people ties between both societies which make this relationship so special. “Many Bahrainis have been to the UK to study and work, and some see the UK as their second home. The latest figures that we have show there are around 14,000 Bahraini students in UK universities at the moment. I calculated that roughly one in 500 of the entire Bahraini population is currently at university in the UK, which is an extraordinary figure,” says Ambassador Martin. “It’s not just about business. We have about 10,000 British residents here, which is by far the largest Western expatriate community. Many of the British people in Bahrain have lived here for decades, with their children brought up and educated here, and therefore the British community is woven into the fabric of Bahrain,” he adds. Prince of Wales’ trip to the Kingdom a month prior

These ties bind the two societies together, facilitating initiatives in education and science. For example, the British Council, which has had a strong presence in the Kingdom since 1959, counts 2,000 students per term at its Manama teaching centre, and holds community events to encourage reading. Meanwhile, the British College of Bahrain, the result of a partnership with the country’s royal family and the University of Salford expects to enrol a first cohort of up to 100 students in September 2017. Today, British-educated Bahrainis are making their mark. “The new mosque in Galali has a female designer, which is quite unusual in terms of mosque designs anywhere in the world,” says Ambassador Martin. “She graduated from the Prince’s School of Traditional Art in London, founded by HRH The Prince of Wales, and was also inspired by the Prince of Wales himself when it came to the design.”

For the ambassador, the closeness between the UK and Bahrain is rarely matched elsewhere. “To many Bahrainis, the UK is more than just a study or holiday destination – it is a home away from home.  And for many Britons born and raised here over generations, Bahrain is equally home.” He also believes that there is direct value to be had from the quality of the ties between the Bahraini and British royal families, as evidenced by initiatives such as the Prince of Wales’ Foundation for Building Community, which is contributing to changing the way in which public housing is designed in Bahrain.

Speaking in Manama in December 2016, British Foreign Secretary Boris Johnson told the gathered audience that “Britain has been part of your story for the last 200 years, and we will be with you for the centuries to come.” Today, as the two countries respond to the fast-changing global landscape, with the UK mapping out its new post-Brexit, international trade and investment trajectory; Bahrain building on its longstanding status as the gateway to the GCC’s rapidly expanding market; and the two nations working in concert to combat the extremist and terrorist threats that are felt particularly strongly across the Gulf States, a window of opportunity has opened for these historical partners to engage in an ever closer relationship for the centuries to come.