As one of the trumpeted mega projects under construction in Turkey, Istanbul New Airport will be capable of handling 150 million passengers per year when fully operational. The Worldfolio spoke with Nihat Özdemir, the Chairman of Limak Holding, one of five companies that will build and operate the airport using a public-private partnership (PPP) model. 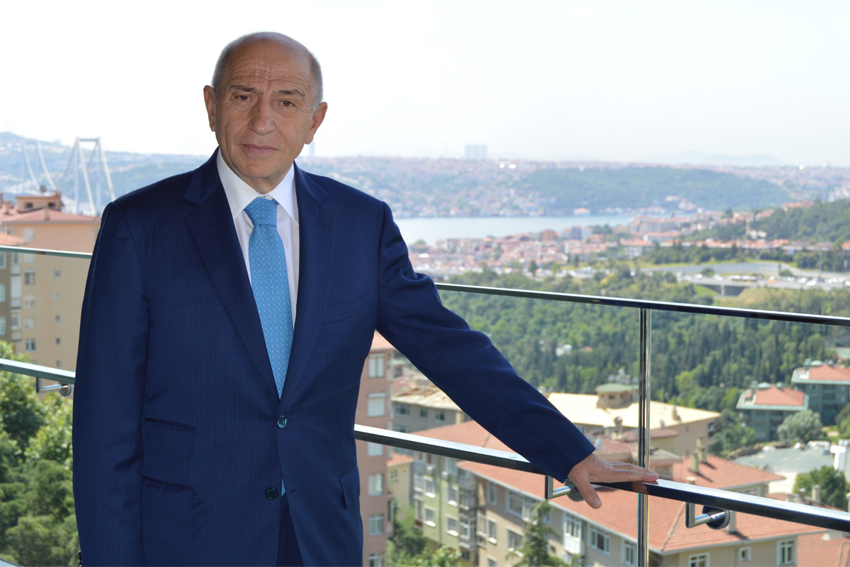 How do you assess the progress being made towards Turkey’s 2023 goal of becoming one of the world’s top 10 economies by 2023 with a GDP of $2 trillion?

Despite many challenges and political turmoil in our neighboring countries there is one certain thing; Turkey is progressing. The 2023 targets are solid and a combination of ongoing mega projects like the Istanbul New Airport will help to make them possible.

How important is the Istanbul New Airport to the growth of trade, tourism and investment in Turkey?

Our project is the biggest PPP project in Turkey and it will have a huge impact. We are planning to conduct an Economical Impact Study within the coming months to show this in detail. As you know, there is a huge debate in London on whether to build an additional runway at one of their airports. Both Heathrow and Gatwick were lobbying to be chosen but they were both advocating increasing the capacity in order to remain connected, attractive and competitive in the global market. We are building the world’s biggest airport for the same reasons.

Each year, approximately 40 million tourists visit Turkey and 70% of them use airlines. In 2023, more than 50 million tourists are targeted. Being a natural bridge between East and West, North and South, Turkey provides convenient transportation to 1.5 billion customers in Europe, Central Asia, Middle East and North Africa – markets that have a total economic value of $25 trillion.

In addition to this, the share of the aviation industry in the GDP of Turkey is higher than other European countries and it is obvious that connectivity is crucial for a strong business environment.

The airport is being built and will ultimately be operated by a consortium of Cengiz-Mapa-Limak-Kolin-Kalyon.

How do you assess the effectiveness and viability of the build-operate-transfer PPP model used for financing IGA?

It is a PPP project with a 25-year concession period. We are going to close financing in the fourth quarter of 2015. It is a long-term financial solution, which is mutually beneficial both for creditors and our consortium. A total of €4.5 billion out of €6 billion will be provided by a group of private and state banks.

As Turkey’s G20 Presidency leads discussions on ways to finance the global infrastructure gap, what lessons can be learned from the way IGA is being financed?

Planning is crucial. That is why we have a triggering construction model based on number of pax which simulated our development until the 2020s.

Described by Turkish Airlines CEO Temel Kotil as “one of the smartest projects on earth,” Istanbul New Airport is expected to open in 2018. What will be the standout features of it when completed?

Istanbul New Airport has many standout features. To name a few of them, it is going to have the world’s largest terminal complex, which is more than 1.3 million m2 under one roof serving 90 million pax/yr. In the initial phase we are going to have one terminal and three runways, but when all phases completed, it will be handling more than 150 million passengers with its three terminals and six runways. It will be serving more than 150 airlines and more than 350 destinations. It is expandable up to 200 million pax/yr.

How do you think your new airport will impact international perceptions of Turkey?

Well, the airport is the first and the last place people visit in the country. When a person steps into the country, you let him go through the airport till he gets his baggage and leaves. 40% of the positive image comes from that experience. This is an important point; you should build a very good terminal, but not only a good terminal, also good services – firstly, the service of the terminal operator from the touchdown to the bridge and the gate. People don’t prefer to be transported by buses so they’d rather go into the terminal for that. You need to build a terminal with enough passenger bridges and with a comfortable environment.

We get now to the second point: the state authorities, the officers and the baggage. So, building the terminal is not enough. There are certain responsibilities of the airport operators and the state authorities in making it quick and efficient. When you provide this, the passenger comes into the country with a happy face.

You should also respect the departures and have a good retailing environment. When you make all this, whether they are businessmen or tourists, you can impact positively on the perceptions of the people visiting the country.

Also, transit passengers are important for the airport. For connections they have to spend a certain amount of time in the terminal, so we need to make them happy during this time. If they have enough time, we should let them rest. So, even if they are transiting we should leave them with a good image, show them a good airport and invite them to visit the country. You should not underestimate these numbers; there is a big number of transit passengers, especially coming from the US or Europe, going to Africa or Asia. For many years transit passengers were flying to Dubai. Turkish Airlines have increased direct flights to different destinations. For example, recently they have included Maputo, Durban, Graz and Atlanta. They do connections to Europe, Dubai or Portugal. It’s happy news for them. The future of the aviation industry is open. Chinese and Indians still haven’t joined the competition.

There are responsibilities from the state that are very important in the airport, especially as regards to passport control. Turkish policies, in arrival and departure, are very successful. Officers are very quick and efficient; they catch any irregularity in a successful way. They allow the passengers to go to the customs quickly. Every day they are improving their services and their technology. In Istanbul you are able to pass with the passport by fingerprints. I didn’t see this in many countries.

Talking about technological advances, can you talk about the high-tech features we can expect at the new airport?

It is going to be the largest airport terminal in the world. From gate to gate, we are planning to build a very quick system. We are visiting all advanced airports in the world, gathering information, and we are implementing all those technological solutions in our new airport. The latest technological advances will come to Istanbul. We are trying to build some solutions for the passengers, including ID solutions and navigation systems. As I said, we will have the latest technology in the airport in order to improve people’s perceptions and experience in our country.

What measures are being taken to reduce the environmental impact of the airport?

The Environmental Management department is one of the first departments we initiated at IGA, and they have been working in collaboration with local and international bodies since early 2014. In order to minimize our environmental impact and develop an environmentally friendly airport, we have conducted an internationally recognized Environmental and Social Impact Study. Environ from the UK was leading this process. All our commitments, procedures and offset projects are based on the result of this study.

What will be the impact of IGA on direct and indirect employment in the Istanbul region?

Currently more than 7,500 people are working for IGA on this project. Istanbul New Airport will generate 100,000 direct and 1.5 million indirect jobs.

What is the potential of IGA to be a worldwide aviation hub that trumps Dubai, which is situated some 4.5 hours east from Istanbul?

Istanbul has its own strategy based on its unbeatable geographic advantage. There are more than 200 destinations in Europe, MENA and Central Asia, which Turkish Airlines and other airlines can serve with a narrow-body fleet. This brings a couple of competitive advantage to them over Gulf airlines. As a result of this narrow-body operation, Turkish Airlines can utilize its wide-body fleet for flights in long-haul operation to Eurasia, Africa, the Americas and Far East.

Turkish Airlines is capable of flying to more destinations in Europe than any other airline, or having more frequencies to popular destinations. This narrow-body operation is also cost effective and creates more choice and connections for passengers.

The Turkish aviation industry has experienced double-digit growth rate since 2002. On the other hand, Istanbul is a popular destination for O&D (origin/destination) passengers as well. The recent MasterCard 2014 Global Destination Cities Index ranks Istanbul as the third most popular European destination for international travelers, behind London and Paris.

Just one final question. This is arguably a fantastic project for Turkey but also for the world, because this airport will open up a lot of opportunities for trade with Africa and other developing regions. This relates to the G20’s idea of inclusiveness and helping to connect more countries to the global economy. So, how are you using the opportunity of the G20 Presidency to communicate a positive message about the airport?

In this G20 meeting new infrastructure projects will be shown and Istanbul New Airport comes first on this. We will find a suitable environment to present our project to the visitors.