United as one nation 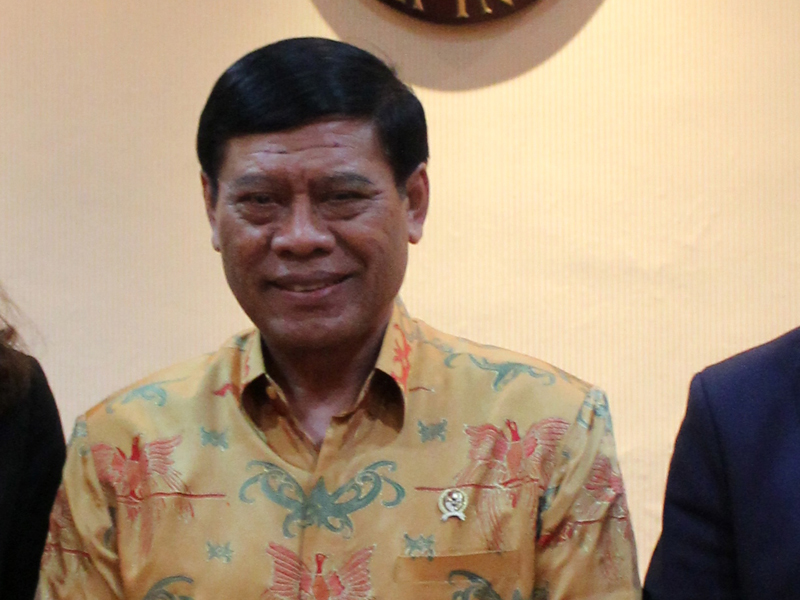 The recent election of President Joko Widodo is a true landmark as the first election of a businessman in Indonesia. It has created excitement and raises hopes that this government can make progress on the country’s key issues such as good governance, expanding infrastructure spending and cutting the red tape. What is for you the impact of this momentum on Indonesia’s history as well as on Indonesia’s image in international arena?

So, we just held the election very recently, democratically. We hope that the people of Indonesia can learn from this process, in a good way. During the election, we had two candidates. We had the presidential debate during the public and democratic campaign, by which we encouraged people to vote for the best candidate. Then, the people voted and decided what is best for the future of Indonesia. After the election, the outcome delivered a message about Indonesia. And the other party recognized the people’s choice. Then, at the presidential inauguration, the presence of Mr Prabowo-Hatta showed that we had differences only in politics but we are still united as one nation of Indonesia. In addition to that, we wanted to show that the Indonesian people are well prepared for democracy, because democracy is the right of the people that we have to respect in an election.

President Joko Widodo’s motto along the election was “kerja, kerja, kerja”, a strong message in order to motivate everyone heading towards a better Indonesia for all. How are your ministry and the ones under your umbrella going to contribute to achieve this goal of a better Indonesia. What is going to be?

Under my umbrella as the Coordinating Minister, there are 12 ministries and agencies. There are six ministries and (6) agencies including the Armed Forces Commander, Chief of Police, and the Attorney General. In total, there are 12. I manage and coordinate them to work, and supervised them to make sure that they are in line with the president’s slogan: work, work, work. I emphasize this, to keep them on track. I can summon them, one by one or all together, in order for me to put them back on track. It is my duty to coordinate all the 12 ministries and institutions so they could work as expected by President Joko Widodo. The 12 ministries and agencies are the Ministry of Foreign Affairs, Ministry of Home Affairs, Ministry of Defence, Ministry of Administrative Reform and Bureaucratic Reform Indonesia, Ministry of Law and Human Rights, Ministry of Communications and Information, Indonesian National Armed Forces, the Indonesian National Police, Attorney General’s Office, Anti-terrorism Agency, Coast Guard (Maritime Security Board), and the other two are, Indonesian State Intelligence Agency, and National Police Commission

So the first one you mentioned, foreign affairs. One of the four foreign affairs policies announced by President Joko Widodo is to promote Indonesia as an archipelago state. So, my question here is with 17.000 islands, 580 different languages and dialect, and some 26 religions, what is going to be the key of successfully keeping unified Indonesia.

Mr. Jokowi’s vision is to develop maritime axis and a highway. The maritime axis is where Indonesia becomes the centre of the existing maritime area in Indonesia. In the east, there is the Pacific Ocean, in the west, there is the Indian Ocean, in the south, there is Australia and in the north, there is Asia. There are three shipping lanes in Indonesia that we have to control, with the Malacca Strait being one of them. Indonesia must ensure that the situation in its waters is safe for marine, domestic and international users. In order to do that, we have to strengthen the Navy and the Coast Guard because 80% of world trade goes through Indonesian waters. So we should be able to secure Indonesian sea against acts of piracy and robbery. Then the maritime highway, it flows smoothly goods and people across Indonesia, connecting all islands in Indonesia. As was said of how we establish the unity of Indonesia, we have 17,000 islands, from that various islands there are various ethnics and religions that are united in the ideology of Pancasila. Then, the sea that lies in between the islands is not separate but can be united.

To better control the maritime axis of Indonesia, you are going to revitalize the agency sea security formerly called Bakorkamla and rebranded as Bakamla. Could you tell us more this revitalization?

It used to be called Bakorkamla, Maritime Security Coordinating Board. Since it is just a coordinating agency, it is not effective in securing the sea. President Joko Widodo wants the Bakorkamla to become Bakamla or, in English, Coast Guard. It is going to be established. There are now 13 institutions - agencies - in Indonesia that oversee the Indonesian waters. They are not effectively coordinated so they will be combined in to one single multi-function agency, called Coast Guard. At this early stage, each of the 13 institutions overseeing the sea will send its people to the Bakamla. But later on, once we have the academy, the Coast Guard will secure the Indonesian waters for so many years ahead. But its main purpose is to secure all Indonesian waters together with the Navy.

So now talking about human rights that is something under your umbrella also. The international community today has seen a lot of positive change in the recent months in the country such as the highlight of pluralism, with President Joko Widodo having Chinese origins. So for me what must be done still to achieve the goal of becoming a flagship model of an emerging country that respects human rights and religious diversity. I mean the country is in very good way but what must be done still.

Indonesia consists of various ethnic groups and religions. We have Pancasila, which stands for Panca, means five, and Sila, means principles. The first is a star, symbolizes belief in the one and only God. Second, the chain, symbolizes a just and civilized humanity. Third, the Bayan tree, symbolizes the unity of Indonesia. Fourth, democracy guided by the inner wisdom in the unanimity arising out of the liberation among the representatives. Fifth social justice for all the people of Indonesia. With the Pancasila, we are able to unite all components of the nation, consisting of various religions, languages, and ethnic tribes. We respect all differences. Our motto states, diversity is a wonderful thing that it enables us to unite in the unitary state of Indonesia. We also respect the rights of people to live, the so-called human rights, where everyone in Indonesia is equal before the law. We have been applying these principles.

In goal alongside religious tolerance as well, the country has mostly Islam as a religion but has successfully accepted all the other religions.

Moving now on another very important sector, defence. The President Joko Widodo has said they will raise defence budget up to 1.5% of the GDP, as well attract more foreign investment in order to boost the army competencies of the country, so we would like to know what this increase, important increase of budget, how you’re going to use it to empower the army and police and which of type investments are welcome.

Usually in developed countries, he defence budget amounts to 2% of GDP. Indonesia remains at 0.9%. We will increase that to 1.5 GDP, but of course it will be done gradually and slowly. We will build the strength of our military defence, so that it can protect the entire Indonesian territory from any threats and provocations. The previous president has done this, but we will provide additional strength to the next mission.

Still talking about the defence. UK and Indonesia have signed a bilateral agreement in 2013 concerning various fields from training soldiers to weapons procurement and civil military cooperation. So how would you like to see the cooperation going, would you like more for the UK to give you new weapons or would you prefer training of your soldiers. I know that there are already numerous university exchanges. So maybe they can train the Indonesian military.

Together, of course, we want to increase the strength of our defence by improving our weaponry and adding defence equipment on land, sea, and air. And in the field of training, we simultaneously conduct training between the two countries, co-operation in training and also joint exercises. My experience in 2009 when I was Chief of Naval Staff, we had this Fleet Review in Manado. At that time we introduced Manado as a tourist destination, but we also invited naval leaders of navies from all over the world to come to Manado. For that occasion, Britain also sent a ship and its leaders.

Keeping on UK and Indonesia relations. In 2012, PM David Cameron said that he wanted to double the trade relationship between two countries, from 2.2 billion US dollars to 4.4 billion US dollars by 2015. One important thing to make this happen is obviously to smooth the custom process. What is the intention of protective policies and taxations reform? How are you going to manage to find the right balance between opening the trade and also protecting the Indonesian market?

We are now applying free trade. We encourage them to trade openly with us. But we also have to protect our products so that they can also be exported. It means that, we are creating a balance between the goods that come into, and out of, Indonesia. We don’t want Indonesia to solely become the import market, but we make sure that countries that are unable to export can use our products. That creates a balance between the imported and exported. It protects people's products, enabling them for export.

As you mentioned at the beginning, you are person that has served your country for many years, you have demonstrated your patriotism and you were about to retire but the president recruited you. As Colonel Arthur said of a patriot, a general never ends but only changes the task. So, I would like to know what is motivating you to keep working for the country at the time you should be at home reading the newspaper?

I retired in 2010. At that time I was 58 years old, still rather young. Well, I still have the desire to present my thoughts to the nation. I joined Mr. Surya Paloh in Nasdem, because he has this thought of restoration, he wants to change the present situation with the better one in the future. With that kind of motto, I was interested in joining, and gave my thoughts. In Nasdem, I was appointed as head of strategic studies and chairman of the advisory council of the party. At that time Mr. Surya Paloh made them solely for studies’ sake, that we could not contribute anything to the government. Then, in order for us to play a role, Mr. Surya Paloh established a new party-Nasdem. I joined the party, in which I studied politics while providing inputs and thoughts to the party that could be used for the benefit of the nation to move forward. After President Joko Widodo was elected, he formed a successful coalition, called "Indonesia Hebat," the first coalition was between PDIP and Nasdem. Then, we won the presidential election. From there, President Joko Widodo certainly can see, out of several parties in the coalition, he can utilize five of them in the government. I also do not know how and on what basis that he entrusts me holding the position of Menkopolhukam.