Interview - October 8, 2014
“Saamwerk, saamtrek” (“Pull together, work together”): this is the philosophy developed by Supra Mahumapelo, Premier of South Africa’s North West Province. In this interview with United World, he talks about pulling together members of the private sector – from big mining companies to small business owners – to tackle “cross sector” socioeconomic issues. Premier Supra Mahumapelo also discusses his new approach to driving the economy, opportunities and prospects for public-private partnerships with foreign investors, how broadband is the key to unlocking the province’s potential, and development plans for Sun City – the South African Las Vegas which is popular with Chinese and Indian visitors to North West Province. 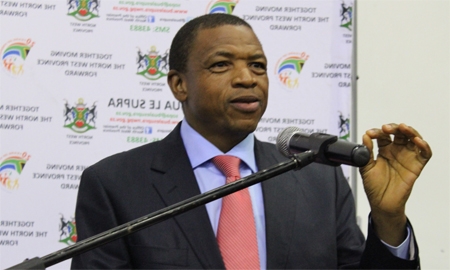 SUPRA MAHUMAPELO | PREMIER OF SOUTH AFRICA’S NORTH WEST PROVINCE
North West is an extremely important province with a lot of potential for development. What areas are you in accordance with the National Development Plan and what are you doing to drive the economy of the North West forward?

Firstly, we decided to call our province in Setswana (local language), Bokone Bophirima (North West in Setswana). Currently there are some challenges but we have a holistic approach to the challenges that we face. I have talked to people about this province and few of them are content and as a result I have announced a series of reforms and new approach to driving the economy. The first pillar will be agriculture, the second pillar culture and the third tourism. This is our ACT policy. The reason why I focus on these three pillars is because as long as human beings exist on this planet, these sectors will continue to prosper and it is the self-sustainable type development which we require.

We have to talk about mining because we are in mining country here in the North West: diamonds, coal and platinum are massive revenue generators in the province of Bokone Bophirima. But we all know that at some stage, these minerals will no longer be there. We must also know and consider that technological developments may also throw up an alternative insofar as what we use these minerals such as platinum for. For instance, platinum is used in motor vehicles for catalytic components; currently the Chinese are trying to develop alternative technology to this usage of platinum for catalytic components. If they can succeed in that, the demand for platinum will decline obviously affecting our revenues and job creation. So we are conscious of creating sustainable industries. I see mining as one of the contributors to our economy but we work hard not to become over reliant on any one industry.

When a river flows, its tributaries flow into a bigger river. The ACT reform will create the three pillars of the economy that we are going to be pushing as the North West province seeks to turn our economy around. It has been working very well currently: it is growing at approximately 3%. We want to take it to 6% GDP growth during this term. We are quite determined. We have developed the following philosophy which is in Afrikaans. We have embraced it as one of the languages. I call it ‘Saamwerk’ and ‘Saamtrek’, which means to work together and pull together.

Nelson Mandela once said: “Everything is impossible until it is done”. You mentioned that you have many problems in the areas of basic services provision. What can the private sector do to get involved and to help you solve these problems?

Through the “Saamwerk, Saamtrek” philosophy we are going to work with everybody in society. For example, we are bringing together all of the mining companies in October and I have said to everyone that this should not be a talk shop. We need to say to them in advance: these are the challenges we have and when we meet we need the answers. We are not going to meet them to start brainstorming. We will work with them and we will address cross sector social issues. That is going to be the approach going forward to get the private sector to come on board.

Secondly we are making a pronouncement: Every person doing business in the North West, should employ a minimum of two young persons. It does not matter whether you are working alone or running a factory, we just want you to employ two young people. If you run a farm, and you take on two young people, teach them how to plough, to breed the animals and so on, on the job training and remunerating them for it. That is going to be the role of the private sector.

One of the most impressive tourist destinations on the continent is Sun City here in the North West. We were blown away by the variety of activities available; it’s comparable to Las Vegas. How do you plan to attract more visitors to Sun City?

We have massive plans. I have already met twice with the international management and I stated that one thing we should introduce to Sun City is consistent business conferencing. For you to have conferencing, it means you will have to enlarge the place. We made a proposal to them to consider the possibility of building an International Conference Centre which would be seen when you enter the resort. If you come to Sun City, you can have facilities for moving around. This would also be good for people in the area. That would be an advantage to business and the public.

There is also an unused airport in Sun City, called the Pilanesberg international airport. We are taking a decision as the executive of the province that we must develop this airport. Also the majority of people who are coming here are from China and India. We are therefore going to try to introduce direct flights from India and Hong Kong. This is because currently travelling to Sun City is reasonably challenging when coming from Johannesburg Airport. We would like to resolve this. We also would like to link the Pilanesberg airport to the Lanseria airport (Gauteng province).

So it is the improved airport connectivity and the ICC which, together with Sun City, we would like to develop so that it will be THE destination of choice for tourists and also MICE events in South Africa. There is a cost of course. If you do not develop these neighbouring villages, there might be some instability because they might not benefit from this development. Therefore, our approach will be such that the neighbouring villages will see an improvement in their lives in terms of transport infrastructure for example to create goodwill and economic improvement for all.

In terms of American investors, where is there an opportunity for them to get involved in public-private partnerships for example?

We have had fruitful discussions in relation to that approach and we will be taking steps to create more public-private partnerships. Firstly we have identified projects in agriculture. There are massive opportunities in this sector. We believe we need companies to bring the relevant and latest technology to the South African market to respond to the challenges in agriculture. We are waiting on technology that will help us make the best products and use of our land possible. We must aim to get the best technology so that we can produce the best products. We are all about raising the standards.

Americans, if they come here, would be able to help us greatly in that particular sector. We can also work with them in the mining sector and also in the tourism sector. We can then educate them in the area of preservation of heritage and culture. Therefore there will be a lot of things in which the Americans can invest. Finally, in the area of ICT we know it can have a large multiplier effect and the US is a leader in this segment. Seeing as we are an underdeveloped province, for us to progress we think that we must move faster in terms of ICT. Distances we have between villages and towns can be closed, not through transport, but through IT. We think that broadband introduction will be key to unlocking a lot of economic potential.

What message would you send to the South African population about leadership and the need for new leaders in society?

Basically, it is three things: the first is discipline. It is very important for us to teach our kids to be disciplined. In everything they do, it must be accompanied by discipline. The second is humility. We must learn to be humble. Sometimes, it is very difficult, but we must remember to remain humble even when we experience success. If you become arrogant, it will not take you anywhere. The third is patience. You can’t build any nation if you don’t have patience. If every young person strives towards those three points, it will build their value system. This way they will have a guarantee of a better future.