Interview - October 10, 2013
Samira Ibrahim Bin Rajab, Minister of State for Information Affairs and the Government's Official Spokesperson, speaks to PM Communications about what makes Bahrain - and Bahrainis - unique, discussing the diversity, freedom of speech and tax-free benefits that await international investors in the island kingdom 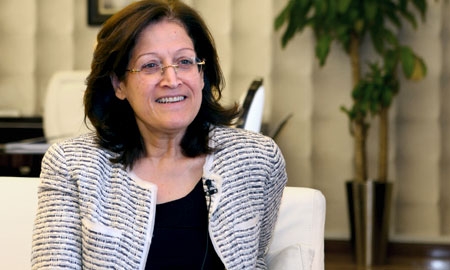 SAMIRA IBRAHIM BIN RAJAB | BAHRAIN'S MINISTER OF STATE FOR INFORMATION AFFAIRS AND THE GOVERNMENT¹S OFFICIAL SPOKESPERSON
As the inaugural publication for the beginning of the 200th Anniversary of Bahraini-British relations, we must go back to 1820, with the signing of the first General Maritime Treaty, and see what has changed in terms of perceptions and identity. I am interested in hearing about your perspective on both the identity of Bahrainis and the image that the country is showing to the UK and the world.
Bahrain is part of the Arab world. We have the same culture and extended families over the region. Bahrain is part of the GCC and it is the only island state in the GCC, which has been open to all cultures from all over the world, as people passed from the East to the West. Bahrainis perceive different cultures and thoughts, and they are used to being active with foreigners.

We are used to respecting others. Bahrain is multicultural, with all religions represented. We respect each other. We learn and use all values from all around the world, to make it a modern country with all kinds of rights. We respect our values as Muslims and Arabs. We have a very unique society that combines all of these aspects; diversity is a lifestyle in Bahrain.

We have very strong and modern laws in Bahrain, which makes investment easier than in most countries. The most important aspect for European investors to know is that Bahrain is a tax-free country at every level. There is no tax on income, profits or transactions. They are free to do what they want with their money. Besides being a tax-free country, we have free education and healthcare is also free. Housing is semi-free.
So Bahrain is the perfect example of a functioning welfare state, but without 40% tax.
We feel it is very normal for us, but for other parts of the world that bear the cost of many taxes, it is something big.

Taxes go towards different services you get in your state in Europe, but in Bahrain, you do not pay tax, and you still receive everything for free. You get free education, with very high standards of schooling, and a high standard healthcare system. People have the right to ask for small three or four-bedroom houses, with each bedroom having a bathroom, and a small garden and their own garage, living room and dining room. This is a luxury for many Europeans, but it is almost free here, with a minimum rent to pay.

Low-income nationals can purchase property at a discounted rate. This image of Bahrain must be portrayed through the media. We have groups in the media that are currently working on destroying our image in the world instead.
There is a strong focus on ‘media excellence’ in the Vision 2030. What does this mean? What are the requisites for achieving excellence and what will make the media here outstanding?
Since 2001 with the new Constitution, freedom of speech has become a part of our life, and it is protected by our Constitution. We practice this freedom of speech whilst being fully protected. The first law was enacted in 2002, and the second, more advanced law has been submitted to the Cabinet, and we are waiting for the approval to be submitted to the Parliament.
Secondly, we have public and private media institutions. A month or two ago, we established the Supreme Council of Communication and Information, which is the regulatory body that protects the media and freedom of speech, to be a regulator.

They have a similar body in France, called the CSA. We based it on the French model. The telecoms industry in Bahrain is open and very advanced, and it has been so for years. IT and telecommunications are part of our life. We are going to build journalism schools, in addition to our universities.
This entire legal framework allows for freedom and growth of the media in Bahrain. Given the experience I have of other countries in the Gulf, I think Bahrain has the power and the potential to actually become a hub for news and content creation for the rest of the Gulf. Would you agree with that?
I think we have this ability in Bahrain. Because we have a Constitution and the law is very well respected in Bahrain, we can protect the media. On the other hand, we are also suffering from the media, which is starting to go in different directions. We are starting to talk about our national media or our national information security, so it is about how we use our freedom on the one hand, and how we protect our media security on the other hand.
As a strong advocate for regional integration, do you think that the GCC has the potential to replicate what the European Union has done to unite the economies, the defence systems, the foreign policy and even the societies of the member states?
Yes. Maybe the Minister of Foreign Affairs will tell you about the procedure we are going through, but Saudi Arabia, Bahrain and all the GCC countries are one country after all. We are states, but we are in the same family. Even the royal families come from the same origin, and families in Bahrain have members in Qatar, Oman and other areas. The whole region is one. We need to go through a union to establish a common power. We have the power internally, but we need to become one body.
Society and media might underestimate the power that Bahrain has traditionally had in the region. Bahrain was always the first, and as a pioneer others have learned from your experiences. Do countries perceive Bahrain as model of best practices to follow?
This is our life and this is our society. It has always been open and free, which made others come and see and try and do things. That is all. We did not have any ambitions to be a model for others. This is our life. I do not want to say that we are pioneers, and that others are not. I would be proud when the others say it.
From our short but insightful experience so far in the country, we can assure that there is a major consensus in the Bahraini society. There are differences in society as in any other country, but there is something untapped, something homogenous in each Bahraini. What is this essence so easy to feel and so hard to describe?
We love life, and we are very ambitious. The world is progressing, and we are following that. I do not know how to explain it in one word, but we are very active. Open minds make societies richer and when you give someone the choice and the freedom to choose what they want and how they want to live, you obtain the best out of people, we have it here 100%. All the choices are here.