Yucatán: so much more than beautiful beaches

Interview - June 20, 2014
Heir of the Mayan culture, owner of magical landscapes and archeological treasures, Yucatán also strives to be a leader in research, productivity and innovation. Huge investment in infrastructure contributes to this added value, synonymous with peace and connectivity. This port state, producer of foods and leader in tourism, offers investors a whole range of possibilities. 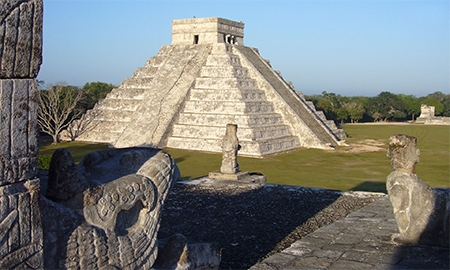 ROLANDO RODRIGO ZAPATA BELLO | GOBERNADOR DE YUCATÁN
What is your view of the aim that all states should have their own voice and be able to communicate as they are doing with national government?
I believe that federalism is, without a doubt, the main characteristic of President Peña Nieto's government. As well as driving transformation and structural reform, I believe that the fact that he was once a state governor gives him a clear understanding of the importance of linking the efforts of all the states to create great national unity. This federalist vocation has been appropriately channelled through the Ministry of the Interior, which is responsible for coordinating state-federal government relations.
Yucatán is one of the safest states. How do you disseminate your practices and strategies to expand the safe zones to other states?
We have worked together with the Ministry of the Interior on the coordination strategy through regionalization. Periodically the president and we governors hold working meetings or workshops with the heads of regional security. This model is replicated within each state.
To ensure that Yucatán is one of the safest places in Mexico, we have continually strengthened our police forces. We assume that the phenomenon of organised crime is a dynamic one, and as such, our police forces must keep up with the advances of criminal groups.
The second prong of our approach is crime prevention. We are convinced that public safety cannot focus solely on policing and weaponry. We must also draw up crime prevention plans.
The third prong of our approach is citizen participation. It is vital that our citizens get involved in public safety. And the most basic element to ensure society's involvement is public trust in its police forces.
What are you doing to support infrastructure development, the geographical location of which plays a strategic role for trade?
In the case of Yucatán, I must point out that we have been included in the country's logistical agenda. This vision strengthens Yucatán state's competitive advantage: its geographical location. Within the framework of the National Infrastructure Plan, there are plans to build highways, strengthen our railways and considerably increase the potential of Progreso port, for example. These are works that will fundamentally strengthen the state's logistic potential and promote the industrialization of the manufacturing sector, which we have been driving in our state and which, as one of the main elements of economic growth will no doubt also be a part of the consolidation of tourism. In Valladolid we are working to set up a central distribution facility, which will allow us to establish schemes to supply the huge market we have both Mexico and on the east coast of the United States.
How are you working to promote industrialization and tourist attractions by spreading awareness of everything that is happening in Yucatán?
Promotion is one our greatest challenges at the moment. Yucatán is a well-known state, recognised throughout Mexico and the world as heir to the great Mayan culture and for our strong characteristics, which include our music, our food and our imposing archaeological sites. But there is another, little-known, side to Yucatán which we are very interested in promoting. It is important for people to know that Yucatán has the biggest critical mass of researchers in the whole of the country's south, southeast region. And so we have built a solid system of research, science and technology, which has given resulted in a science and technology park. We have invested a lot, with the premise that these investments are aimed at productivity and not just increasing intellectual quality. To this end, we have involved public and academic institutions as well as the private sector. We have been consolidating an ecosystem of innovation that fosters the reindustrialization process, particularly in the manufacturing sector.
What does the United States repesent, as the country's main international investor and our main international tourist provider?
Without a doubt, the United States represents a great space for selling the products we make here. Its proximity to our coast is relevant. And of course there is the great capacity the United States has in its markets and its ability to send tourists to different parts of the world.  Something else that is very important to us, and has come about very naturally and on which we are currently working, is the phenomenon of second homes. Many US citizens spend a large part of the year here in Mexico, and we are now working to frame this phenomenon in a temporary resident scheme so we can take maximum advantage of the situation.
What are you doing to establish a direct ferry link with the United States?
The cruiseship industry is an important channel to develop. We want to substantially increase the arrival of cruiseships to Progreso port. At the same time, we are promoting the reactivation of a ferry service, which would have the dual function of attracting international tourism and offering a transfer service for those Americans who, as I mentioned before, have chosen Yucatán as their second home.
You are very close to Quintana Roo and Cozumel. Does being so close to these destinations make it difficult to promote tourism?
I propose that tourism is a branch of the economy which is not given to competition but rather to complimentarity. In this respect, we share much of the regional strengthening strategy that the federal government is currently promoting. The big idea here is connectivity. We should make it possible for tourists to enjoy the different attractions we have to offer across the region in one sole trip.
Why do you give so much importance to contact with people?
The best reality is the possible reality. And I am convinced that this reality is best defined by the people, not the governor. To ensure that those of us in government can work hand in hand with society, we need to keep our fingers on the pulse of what society wants, desires and demands.