Nuevo León: ‘We want it to turn into the Houston of Mexico’

Interview - June 9, 2014
Governor Rodrigo Medina de la Cruz closed 2013 with record figures and this year, he is going for more. A highly qualified workforce, a peaceful social climate, private and public sector initiative and an ongoing bet in education are some of the pillars which are being bet on by a state experiencing continuous growth. 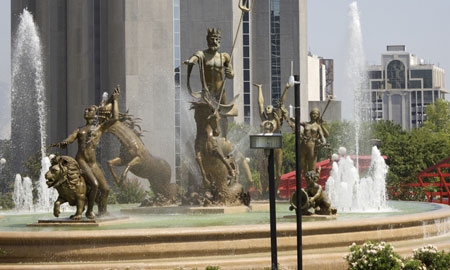 RODRIGO MEDINA DE LA CRUZ | GOVERNOR OF NUEVO LEON
There is a tendency by the government to favor national unity. What is your opinion about this historical interest in encouraging integration through a dialog between the federal government and various organizations is?

I think it is a wonderful idea and a great strategy. It is always very important to find communication channels, both at a national and an international level, to share and display our country's strengths and in this particular case, those of the state of Nuevo León. I think that great efforts have been made through the federation to make a common case among the different organizations to face the challenges, and see the strengths, that we have before us.

One of the strengths that is trying to be stimulated in every state is security in order to guarantee civic coexistence. The Secretary of the Interior has decided that the different states should have a single police authority, as well as a coordination that goes beyond what was present among local, state and federal authorities. How has Nuevo León benefited from this way of understanding state security?

This federal administration has begun a new way of understanding and working with federal organizations; we are now seeing a common effort in coordination that benefits everyone. In Nuevo León, we have been working on a security strategy that has given good results. We have reduced the crime index by 70% over three consecutive years (theft, homicide, extortion, kidnapping). We have built a new civil police that has been a model both at a national and an international level. We have transformed the state's general judicial policies and significantly improved our intelligence gathering capabilities. In this framework, public participation has been a key factor, working with the state in order for the strategy to be successful.

Do you believe that this is a good time to let the US know about the transformation that Mexico is undergoing, in matters of security for example?

I believe that it is always a good time, for both public and private organizations, to explain what is happening and to show the other side of the coin. It is a good opportunity, taking into account the phase our country is going through. It is time to put our foot down on the gas pedal to be able to reach every corner, in this case the US, which is a very important market for us, and an excellent opportunity which we are taking advantage of.

What does the state of Nuevo León offer, that other states do not, that might attract the attention of American investors? And what is your state benefiting from, that has allowed it to grow at a rate above the national average during the past year?

Nuevo León is the leading state for investment for many reasons. We have been growing at a rate of $1 billion per year. In 2011, we had $1.7 billion. In 2012: $2.7 billion; in 2013: $3.6 billion, and this year we are expecting to exceed $4 billion – a record figure that has never been reached by any federal entity in the country. We have achieved these results by aligning three different sectors that are mutually reinforcing and perfectly coordinated: private sector entrepreneurship, academia, and public service.
Nuevo León derives its strength from its people; highly skilled human capital. We have the main universities in the country and high level technical education; our lowest level activity here is advanced manufacturing – not so much low level assembly – and from there only upwards. We are also growing a lot in investigation and scientific development, which is tremendously important for firms, and at the same time, our strategic geographical location helps us.

Reference should also be made to our social peace and stable workforce; we have enjoyed 15 consecutive years without strikes, something that no other state in the republic has achieved. Workers and employers get along well and the unions are in favor of increased productivity.

This year, we have attracted approximately $1 billion in foreign investment so far. We lead in employment creation, directly competing with the Federal District and its metropolitan area.

You are telling me about the historical fact about the quantities that will be reached, but I would also like to talk about debt. Nuevo León has quite a high level of debt, I would like to know if this debt is under control and how you justify the high level of debt that you have. The last data published by the Mexican stock market show that you are interested in emitting seven billion pesos ($542 million) in new bonds with a maturity of 25 years. What is this due to?

First of all, central government debt should be differentiated from state debt. It is well managed debt that was even recently upgraded by Standard & Poor's to stable. There is a logical explanation. We are organized as a federation which defines the percentages of resources' allocations. Generally speaking, this distribution works in the following manner: the more social satisfaction you achieve, the greater the share of resources allocated to you.

Nuevo León was ravaged by a hurricane in 2010, and this resulted in 17 billion pesos having to be spent rebuilding the city. We have made investments that have meant an extra expense that is separate from the funds we receive from the federation.
On the other hand, we have pioneered a policy that will be adopted at a national level, the Plan de Ordenamiento de las Finanzas Publicas (Public Finances Ordering Plan), which has allowed us to cut costs by just over 4 billion pesos a year. We have prioritized investment and restructured debt.

We are now in a year of state reforms. Nuevo León plays an important role within the energy reform; it aims to position itself as an epicenter. But I would like to talk about its handicaps, like the water supply, since a lot of water is needed in order to extract gas. What is being done about this? Could you also comment on what the Monterrey VI is and what the expectations in regard to this plan are?

We have to take a step back in order to be able to appreciate the great political effort that has taken place in this country in order to push forward all the reforms, including the energy reform, as it has been a historical time for our country.

The energy reform will generate an extraordinary amount of income. And since we have not been able to do it through PEMEX, it is essential in order to exploit all of the energy potential that our country has.
Nuevo León has been the first state to publish a plan for the energy sector. We know that our opportunities lie in exploitation itself due to our presence in the Burgos basin and we are aware of all the services that will be needed as a result of the exploitation of energy resources. We want it to turn into the Houston of Mexico.

As far as the matter of the water supply is concerned, Nuevo León is supplied by the Río Bravo basin, which will not guarantee our water supply for many more years. We also have to remember that we consume a significant quantity of water; that this consumption is growing at a rate of one cubic metre every four years and that at present, we consume 11 cubic metres of water every second.

This is the motive behind the Monterrey VI project. It is the plan established to bring water from the Panc basin. We are going to create the first aqueduct to transfer water between two basins that are approximately 500km long, the largest in Latin America. It will be a historical hydraulic construction for the country that is going to secure the water supply for the state during the next 50 years, guaranteeing firms locating here a water supply as well.

We want to be the state that makes the most of this energy reform because we are aware of its enormous economic potential.

What is your opinion about the national infrastructure plan that was put forward just three weeks ago?

It is an ambitious plan that lays out a very clear route towards where we Mexicans want to go, through a substantial improvement of the country's infrastructure. Parties such as the public-private associations are taking full advantage of it because of a greater potential return for investment. I believe that a possible, coherent, very ambitious plan that sets a precedent has been finally put forward. Personally, I am very satisfied and happy that it has been done in the way it has, and to have been a part of it.