Worldwide travel group H.I.S. opened Japan’s first robot-staffed hotel, the Henn-na Hotel, last year in the southern Nagasaki Prefecture, using advanced technologyies to offer the ultimate in efficiency in the hospitality sector. Chairman Hideo Sawada takes a look at Japan’s tourism industry and discusses how their know-how could help boost efficiency and meet the demands of not only tourism, but also other booming industries such as food production. 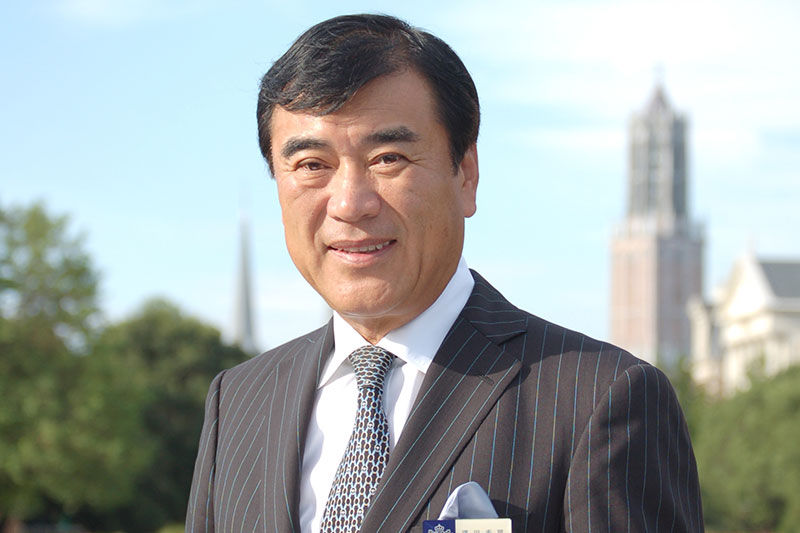 What do you think should be the government’s priorities in terms of attracting tourists and spending? Where is the promotion needed?

Our original target was set at 20 million people by 2020, but we obviously have had a 50% increase, so the target is being almost doubled to 40 million. The most important thing is that we need to maintain the level of quality, service, and price that we already have. With this abrupt increase in numbers of tourists, it is becoming more difficult to get reservations at hotels. I believe this is going to be one of the biggest issues. We also have companies in Japan, where people can rent space in their own private residences to people like Airbnb. But we need proper hotels. We need official hotels too. We’re talking about doubling the number of tourists; but you cannot just put these hotels up overnight.

How could maybe the government work with leading companies like H.I.S.?

I think one of the things would be to sit down and talk with the government because there is a big focus on the tourism industry right now, and they are increasing the target. I think that is great as long as we maintain the quality and services we have, but there are limits to everything. If you are going to increase it 30% or 40%, you have to be sure that you can maintain what you already have. Too much is not a good thing.

How could Japan maybe attract more Europeans to the unique experiences you have here?

I am telling the government the number of Chinese tourists is increasing which is great, but it is the Europeans who stay longer and spend more money on goods and food. It is the US and European tourists who we profit from the most.

Unlike your main competitors here, like JTB or Nippon Travel Agency, primarily your business is international. How are you continuing to grow your international portfolio, which is what Japan truly needs?

I think that extending our international services is a huge focus for us. We already have 215 overseas bases. A major part of our profits do come from our worldwide business, including Asia. I think we are coming up to the stage of big tourism, large-scale tourism. Looking at Indonesia and Thailand, we could end up with six or seven hundred. The sky is the limit.

We were told recently that H.I.S. acquired a 60% stake in Activity Japan, which is a digital platform focused on more experience-based tourism. Maybe is this the future of H.I.S.?

H.I.S. is the leader in outbound business. We do not expect a large increase in this tourism in the future because the population of Japan is shrinking, so fewer people will be going abroad. However, we do expect a lot of growth, 50% maybe. That is the big focus for us, and I think we are seeing double-digit growth there. We are not yet number one in Japan right now, but we are working at extending our domestic tourism business. Do you think that tourists will be surprised at how cost effective and how affordable Japan is when they come here?

The cost of hotels in Tokyo, Osaka and Kyoto is going up, but I do not believe they are as high as London or New York. When people say Japan is expensive, it is true the price for hotels is high, but not as much as in other countries. I think we are introducing a lot of innovation that the three/four star hotels have.

There are three major costs involved in hotels. One is construction cost, another is utility prices, and the third is labor. We reduced two of the three, utilities and labor, drastically by introducing robots in our hotels. You can keep the price at 10,000 yen or less, and still make a profit using robots. I think that is where the future is going. I think we are doing that kind of thing. As we see improvements in robots, I think we are going to be able to use them more to offset the labor shortage, and it is going to be a very efficient way to run the hotel. As our systems and our robots advance, we are going to be able to be even more efficient. We opened a hotel last year in July and there have been no major issues. We need to have it in operation for about a year before we can really start taking it somewhere else, but the tests have all been done. There are no big problems. We are looking at taking it to other countries, taking it worldwide; however, we have to test for a year to ensure the performance and efficiency of the robots. There is still room for improvement, and we are adding to them.

Now we have the robot next to the machine, but we are going to be eliminating the machine component so that the robot can be even more efficient. We are going to be putting it in place to expand three different types of systems. In one system, we would provide the know-how so we could provide the robots to three or four-star hotels. They would see an increase in their profits and a downturn in their prices, and they would be able to lower their prices. We could be providing the know-how.

In the second one, we would manage the hotels. In the third style, we will build the hotel and run it. I think in the next 10 years, we are going to be able to introduce these robots in a large number of three and four-star hotels around the world.

Worldwide tourism is really on the rise, and this trend will continue. What is important though is when people travel the first thing they need is accommodation. They need a place to stay. Then they look for meals, and they are interested in the culture and history of the area. But if the price of hotels is too high, either they will not be able to travel or they will end up staying in hotels with poor service. I think that by introducing this system, we are going to be able to make tourism easier everywhere in the world.

I also believe that hotels get more comfortable when they get to a level where more people stay there. It is going to encourage more communication, and people are going to know other countries. This is a way that can contribute to world peace.

We know when people travel their need to trust the company they go with, the agency. You’ve been building this empire by yourself, so do you feel personally responsible to be the face of the tourism of Japan?

Rather than my personal sense of responsibility, it is kind of a corporate policy to place a lot of value on nature, and to make sure that we make a contribution to world peace through travel.

Most people are happy if they are enjoying themselves. They do not go to war or want to fight when they are enjoying a good meal. We are currently looking at building food production factories because people like food, and by doing that we can expand our innovation. When people are eating and enjoying meals, they are not fighting.

Our vision is if we get robots into factories, you can produce food anywhere. You can produce it in the desert or mountains cheaply.

So are you looking to scale robotics into other sectors? It’s tourism now, but is the food industry next?

Massive food production plants and robots. We want to build a factory like that first in Japan. Profits are important because without profits you cannot conduct new research or build new plants. You need profits to develop the next technologies and the next robots. Also, I think nature, culture, and arts are important.

Do you think sustainability should be at the core of people’s operations when they are considering making growth decisions?

We just opened our second robot hotel, and are using photovoltaic power generation there to produce hydrogen, so we are going to be able to run it with natural energy 365 days a year. Right now, we are carrying out tests. It is not cost effective yet, but I think 10 years from now we are going to be producing hydrogen at the level where it is going to be cost efficient. I also think one of the reasons people go to war is not just over food, but energy problems as well. If we can solve some of these energy problems, it will contribute to world peace. I think that is going to come down to these technologies in five to 10 years. It has been two weeks since we opened our second hotel powered by hydrogen production.

If you could recommend one experience to the G7 leaders who will be coming to Japan, what would it be?

I want people to see the beauty we have in Japan. Of course, the culture and mystery are important too. But when you look at the balance between nature and man-made equipment and facilities, now people are destroying that balance. I would like people to come to Japan, see our beauty and create that balance worldwide. I think it is all about balance. When you lose the balance, that’s when problems occur. If you look at space or in nature you see balance. I think in the financial realm, if you have too many rich and too many poor, people start fighting. It all comes down to balance.