Robotics & ICT to shake up construction

Construction, civil engineering and real estate contractor with a hi-tech edge, Asunaro Aoki Construction Co., Ltd. uses advanced techniques to make existing buildings more earthquake resistant with the minimum of disruption. President Yasunobu Ueno explains the company’s robotic and ICT developments in the construction sector and why the opportunities coming up over the next decade are so crucial to Japan and advantageous for investors. 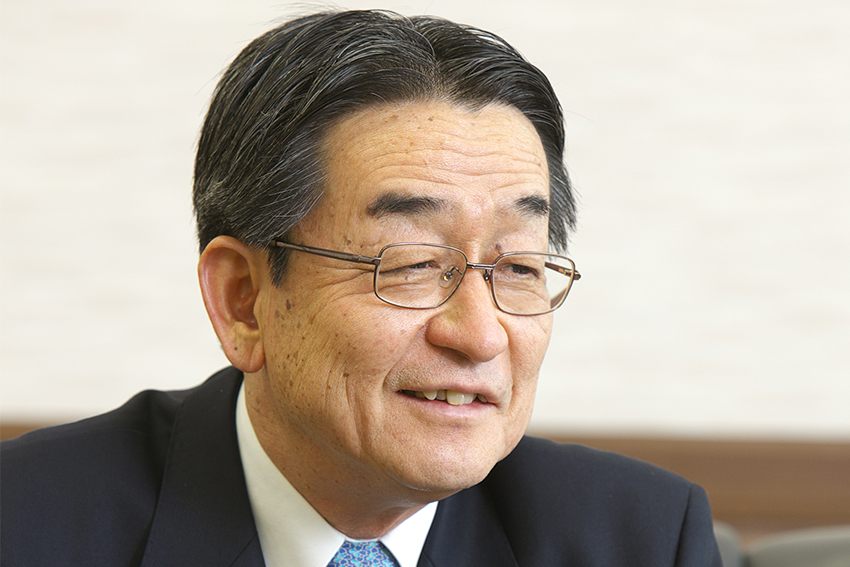 What would you say has been the impact of Abenomics on the construction sector and on Asunaro Aoki specifically?

First of all, Abenomics was initiated roughly three years ago, and Japan’s construction sector had been through what we often call “the lost 20 years”. We had two decades of essentially lost opportunities, and a very difficult time for the industry. Investment in infrastructure and construction plunged. Twenty years ago investment was around 80 trillion yen, but before the Great East Japan Earthquake it was about half that level. As you know, we had the disaster in Tohoku with the earthquake and tsunami. Then, Abe came into office and initiated Abenomics and it has been a huge opportunity for the construction sector. Disaster reconstruction has brought about a large amount of rebuilding, and has been under way for several years. We have been planning to build on this opportunity, but have also focused on the 2020 Olympics coming up. That is going to create more opportunities for us. During the next 10 years, Japan’s construction industry needs to grow because it is our last chance to truly recover from what we have been through.

Speaking of the 2020 Olympics, $3.8 billion has been earmarked for construction of infrastructure. How are you positioning your company to take advantage and to capitalize to build some of these projects?

Obviously, the Olympics will be a big opportunity for the construction industry. $3.8 billion is nothing to sneeze at. In terms of the overall pie, it is not going to be huge. We are looking at the Olympics as an opportunity, but we are also looking beyond it. There is a lot of road construction happening and as you said, Japan has a lot of earthquakes. We are working on earthquake countermeasures by making buildings more resistant to earthquakes and disasters.

Your company went through a merger 10 years ago, merging Aoki and Asunaro to build a stronger business base. Is this consolidation one of the keys to you becoming one of the leading construction companies, especially in civil engineering?

When we looked at merging those two companies, Aoki had the edge in terms of civil engineering technology, but Asunaro was stronger in ICT technology. We were very interested in the robotic know-how that they had. That is something very useful. I think that ICT is going to carry a big weight in the construction sector. Robotics is going to be a sales tool for us and it is an area that we want to make good use of.

Your utilization of ICT robotics in the construction sector is quite unique. Can you outline how you utilize technology within your operations and how that gives you a competitive advantage?

We already have robot driven machinery out in the field that is in application. Another thing we are looking at is using drones, which are coming into wider circulation. I believe there is a lot that can be done in the area of drones.

Obviously, there are a lot of control operations involved in construction, and one thing we want to do is reduce the amount of documentation that you have to carry out to the field. If you can put it on an iPad and bring it to the construction site, there is value in it. We are not the only ones who have this goal – everyone in the industry would like to be in that area. The government is actually taking action, and the Minister of Land, Infrastructure, Transport and Tourism is introducing something called I-Construction where they are looking at bringing ICT into the construction site.

Can you outline the impressive technology institute that you set up at Tsukuba Science City and how it fits into you gaining this competitive advantage in robotics and technology?

The institute is located about an hour from central Tokyo and we have just under 30 people working there. As a general contractor, it is not like the university research center where they are focused more on fundamental technology. We are focusing on technology that we can actually put to work in our own applications there. One thing that we are focusing on in particular is seismic technology, earthquake countermeasures.

Because of the aging society there is more emphasis on renovation as opposed to new buildings. How are you adapting to this new environment?

This is the area of renewal, and one example is schools. We are focusing on buildings like public structures and apartment buildings, and reinforcing them to better withstand earthquakes. This is one of our central focuses and we are able to reinforce the buildings while people are still living there. Normally, if you are renovating a building everyone has to move out which causes a big disruption. We can do it while people are still in their homes.

How does this differentiate you from your main competitors?

An example is when we get an order from a company to make their building more resistant to earthquakes. Normally, you have to go in and add more walls and pillars, make the pillars heavier, and move everyone out of the building. We have the technology that allows us to reinforce the exterior of the buildings so no one has to move out. We can reinforce from the outside.

Places like California could very well use some of your technology that you have honed here in Japan. Do you see the opportunity to grow internationally to leverage all of this expertise and knowledge you have in seismic activity into disaster relief?

Right now, we are not looking at overseas expansion. We did before the merger. When we were Aoki Corporation, we had operations in a number of countries like in Southeast Asia, Central and South America, North America, Brazil, and Portugal; but we went through a civil rehabilitation of the company. We decided at that point to not involve ourselves in international operations and overseas projects. Given the domestic situation in Japan, our company and all companies in the construction sector need to sit down and rethink whether or not we need to go into international operations. In other words, it means whether you can sustain the company only by domestic operations.

Some have said that with the shrinking population and the aging society there could be a shortage of workers in the coming years. What are the biggest challenges you are facing to grow your operations?

You hit the nail right on the head when you said labor shortages. This is going to be our biggest problem in the next 10 years. Right now, the construction industry is supported in large part by older workers who are in their 50s and beyond. They are going to be retiring en masse very soon and we are going to see our workforce reduced by one third. We need to bring in new people, young people, but it is not going to be enough. We are not going to be able to cover it with such a small group; we need this productivity improvement technology. Ensuring enough workers is going to be the biggest problem we face.

Asunaro Aoki has always been passionate about reducing its impact on the environment such as its soil pollution reduction services and wind power generation construction. Can you outline why not only is it the right thing to do but also can be very profitable?

Even before the accident at the Fukushima site, we knew we were coming into the age of clean energy. It is where we were going, and coming in. In this line of business, we build clean energy into the work instead of aiming specifically at one clean-energy component. Clean energy projects have an appropriate profit margin so it brings in profits and makes a social contribution. Those are the two reasons we pursue clean energy so assertively in our work.

Can you elaborate on why contributing to society is so important to the future of Asunaro Aoki?

Obviously, if you are not making a profit then you will not have a company much longer. You need appropriate profit in order to keep going. In terms of social contribution, infrastructure is the basis of people’s lives. People need buildings, roads, and highways. We feel that by being involved in building infrastructure, building renovation and renewal, and construction, we can make a contribution to society. I think that one facet of government policy is to emphasize that contributing to society by building infrastructure supports people’s lives.

What is the new brand of Japan that people should have in their minds as the country leaves behind two decades of deflation?

We would really like the world to see that after the two lost decades and disasters, we have come back. We have rebuilt Japan. I would like people to know that, and know that the construction sector played a critical role in it.

In Japan, construction does not have a high social rank. What I want people to know is that we contribute to society. We are involved in all kinds of things, and we are going to be taking in a lot of young people. We have a very strong role to play, and I could not state this fact more.