Sierra Leone has drawn on the strength and resolve of its people to overcome major setbacks to its social and economic development, and now it is better prepared to face new challenges and is pursuing a stronger, more sustainable and greener path for growth. Minister of Foreign Affairs and International Co-operation Dr Samura M.W. Kamara discusses some of the lessons learned over the years, the proposed reform of the UN Security Council, and the efforts pushing ahead the country’s ongoing transformation. 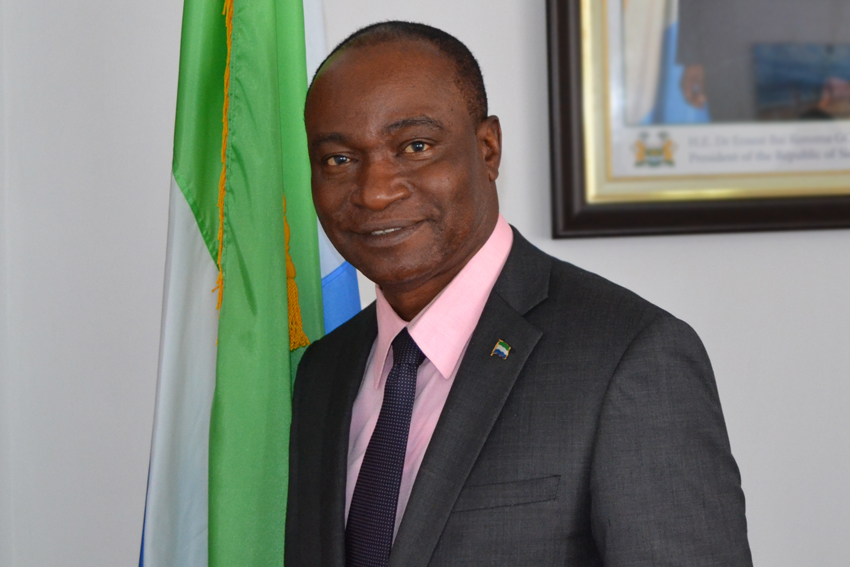 After the IMF mission, last September, the institution backed Sierra Leone’s last three years of economic reforms, stating that its economy proved resilient in the face of the two major exogenous shocks: the Ebola outbreak and the drop in iron ore prices. What have been the main reasons behind this successful economic recovery?

First and foremost, I would like to mention Sierra Leoneans’ resilience as the main reason behind our recovery. The optimism and strength of our people have been critical. We, as a country, have learnt very bitter lessons. We suffered a terrible civil war for years and even now, 15 years after, we are still recovering from that. From 2002 to 2013, we undertook a successful process to rebuild our country and reunite our society, achieving one of the largest GDP growths in the world in 2013. Then, in March 2014, Ebola came, an unseen enemy we could not stop. You cannot negotiate with an enemy you cannot see. Ebola took more than 30,000 of our people that we lost.

Despite all these struggles and suffering, we did not have any other option than moving forward. In fighting Ebola crisis, we learnt two valuable lessons: the first one is that to overcome a crisis a country needs a strong leadership that guides the different communities. Luckily, we had President Koroma, who stayed and traveled around the entire country when the majority of expats left. He was not scared of Ebola. None of his ministers disappeared. We were all here working with him, traveling with him and leading the country efforts against the disease.

The second lesson we learnt is how important strong and engaged communities remain for Sierra Leone. Our different communities fought together against Ebola. They took this fight as their own responsibility. Even musicians put all their efforts those days to create hopeful music and encourage the brave volunteers in our national fight against Ebola. Even if wearing the anti-contagion uniform and becoming an Ebola burial person was not a pleasant activity, we had hundreds of them. I was especially touched to see how engaged was our youth. Of course, we remain extremely grateful to our international partners too, who helped Sierra Leone’s efforts in fighting Ebola in very different but useful ways.

Currently we are in the middle of the post-Ebola country rebuilding. In 2015 our economy contracted 20.5%. All we had gained was wiped out. This is why our government launched the Ebola Recovery Program, whose goals are aligned to our previous Agenda For Prosperity and its eight pillars.

Beyond the fight against Ebola, President Koroma’s leadership has been also experienced in Africa in his capacity as Coordinator of the African Union (AU) Committee of Ten Heads of State and Government. This group is canvassing the African Common Position on the reform of the UN Security Council that requests two permanent seats for African countries. In his speech last September to the UN General Assembly, President Koroma stated, on behalf of the AU 54-members, that Africa deserves such positions as a matter of justice and right to equal participation in decision-making on peace and security issues worldwide. With which international partners, beyond your African Union fellows, is Sierra Leone working to achieve this desired reform?

The African Committee of Ten, or the C-10, is the group of African countries responsible for advocating the request of the entire African community to reform the UN Security Council. The problem is that several countries are also requesting a permanent seat. The main challenge for the Sierra Leone Foreign Service has been to bring and keep all of Africa together and to deliver unified declarations and maintain a solid and common position. Our President’s main priority is to keep this common African position strong and ensure that we all remain on the same page, which is already a hard task.

The second priority is how to advocate this common African position towards the international community. For that, it is important to be part of one of the groups present in the UN General Assembly. Even if there are so many groups, the P-5 remains as the most important one. This is the group of the five original Security Council members with veto. They are the ones that will take the final decision regarding whether this reform goes through or not, thanks to their veto power.

One of the alternative reform proposals that have been circulating is the one that proposes enlarging the number of permanent members of the UN Security Council without giving these newcomers the veto right. From the common African position point of view, this is creating a third category of members inside the Council, which is unacceptable. This will ultimately break the idea that all countries are equal.

Another proposal is the one from the so-called G-4, a powerful group formed by Brazil, India, Japan and Germany. Those four countries are requesting the suspension of the veto for some years, to then review the results of this hypothetical non-veto period and assess which would be the best reform.

In any case, we understand that the UN reform is neither a fast nor an easy process. Reforming a multilateral organization still remains as a great challenge. We have already been 10 years discussing it. After all, the UN Security Council has only been reformed once, when it was enlarged and started to have 15 members instead of 10.

Our main hope is in the world’s woos towards the common African position and our C-10. President Koroma will remain committed to advancing this reform, taking advantage of the sympathy that Africa enjoys around the world.

Of course, President Koroma is not doing these efforts alone. He has all Sierra Leone foreign service behind. With the theme “Sierra Leone Foreign Service Renaissance in the 21st Century,” Mr Koroma officially unveiled the 2014-2018 Foreign Service Transformation Strategy to professionalize your foreign service and increase the country’s voice and representation. How are you achieving this transformation strategy?

It takes time to reform a ministry internally. I learnt that when I was the Minister of Finance, where I had to undertake different reforms too. There, the biggest challenge was to change the mindset of my team. Working in a foreign service is not just about going to receptions. You must also be an economic agent of the country. We are also ensuring the coordination of the foreign actions of the other ministries. We want to remain the ankle of Sierra Leone’s international relations.

Currently, we have 30 categories of professionals inside the Ministry: economists, lawyers, public relations experts, expatriates… Different to some of our French-speaking neighbors, which still have a bureaucratic and rigid foreign service organization, here in Sierra Leone we are trying to apply a results-oriented management for our team. We are focused on making ourselves known in the world. The dimensions of international relations change as long as the threats the world is facing. We should be a dynamic and adaptable organization ready to tackle them together with the international community. We are working to empower our Ministry of Foreign Affairs and making it a central piece of the Sierra Leone government.

In Sierra Leone, we still have our painful legacies to overcome. First of all, from our civil war 15 years ago, and secondly, from the Ebola outbreak. These crises have not only left relevant death tolls and pain, but also visible damages to our infrastructure. However, now we are better prepared to face new challenges. We are pursuing a stronger and more sustainable and green growth for Sierra Leone and different developments are ongoing across the country.

In all these efforts, the UK must remain our strategic international partner, not only regarding Official Development Aid, but beyond. Sierra Leone is ready for business and we still rely in our British friends to come, invest and trade with us. We are looking forward to strengthening our partnership with the UK in this post-Brexit era.