Peru should address this industry with a comprehensive reform, starting by giving the national public policy of hydrocarbons the necessary priority inside the country’s energy policy

Beatriz Merino, President of Sociedad Peruana de Hidrocarburos (SPH) sits down with United World to discuss the current situation of the country’s energy mix and the role of both public and private sector in the country’s Energy industry growth. 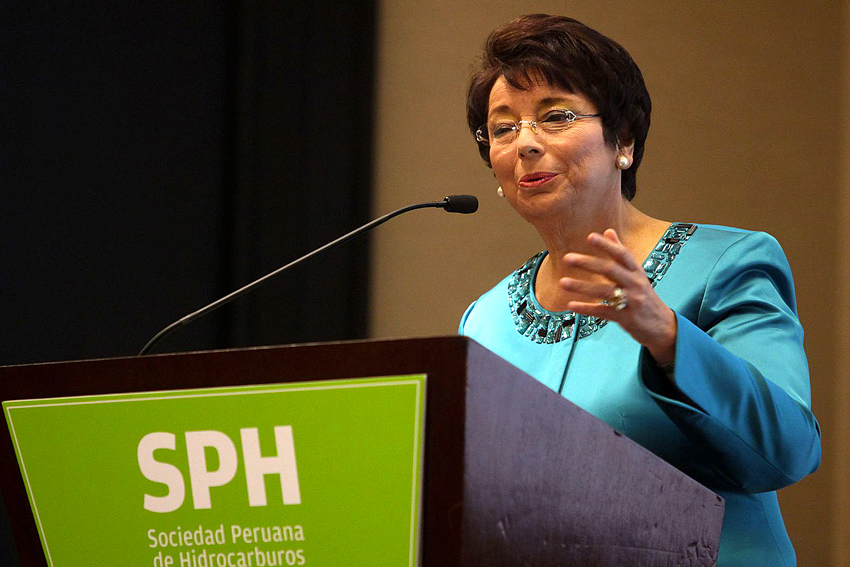 Peru has led the region in the recent years with an average 6% growth rate. We would like you to comment on the contribution of the energy sector to the dynamic of Peru’s economic growth during the last decade.

The contribution of the hydrocarbon industry to Peru’s GDP was developed in one of the reports based on official data that we presented, which states that between 2007 and 2013 the contribution to this growth was of an order of 10%, that is, a total aggregate of 70.000 million Soles to the country’s economy.

Between 2004 and 2013, 89 exploratory wells have been drilled, about nine per year, which is still a low number in international competitiveness terms.

The hydrocarbons industry contributes nearly 9% of the tax revenue from commercial activities, and in general terms, from 100 new soles that the tax administration collects, six come from this activity.

On average, between 2003 and 2013, it has contributed with 6% of the total country’s collection and in these terms it has grown 25%. This increase is also represented in the royalties, which are 10 times higher than the ones coming from the mining sector as rates are higher in our sector.

On the other hand, it is important to remark that, through the system of fees and duties, the hydrocarbon industry is the biggest contributor to regional tax collection. In regions such as Cuzco, Loreto or Huanaco, among others, we would be talking of 85% of the budget for current expenditures.

This means that the downturn of the sector is going to have a strong impact at a local level.

Aiming at achieving energy security for the country, how does Peru exploit the entire potential of the sub-Andean region?

I think that Peru should address this industry with a comprehensive reform, starting by giving the national public policy of hydrocarbons the necessary priority inside the country’s energy policy.

It is currently mixed among other priorities and that is one of the reasons why we have seen the fall of its presence in the public and in the media agenda, both at local and international level.

Therefore, considering that the current administration is finalizing its mandate, it is very important to declare which is the agenda for hydrocarbon for the next five years in Peru.

As I have mentioned, in the first place the necessary priority should be given inside the whole energy policy. In a second stage, I think we need to redesign the State’s institutional framework to deal with this field.

The importance of the contribution of this industry to the national economy should be reflected in the government institutions. Currently, the hydrocarbons sector is represented by a National Direction, which is at the same time inside a Vice ministry inside the Ministry of Energy and Mines, which in my opinion is a flaw that the Peruvian government needs to fix.

It would be convenient if this government, before it finishes its term, left as a legacy at least the creation of a Vice ministry of Hydrocarbons, providing the sector with a stature in line with its contribution to the national economy.

Thirdly, we still have the setback of the regulatory framework.

Peru has succeeded in attracting oil and gas companies and top-rated international projects, but still 65% of the hydrocarbon basin remains unexplored, not even getting to produce 60.000 barrels per day while neighboring countries, such as Ecuador, reach around a million barrels per day.

I think we have fallen into the trap of endless and inexhaustible red tape and we have lost the opportunity of oil being above US$ 100. While oil was reaching or even exceeding that price, the oil companies in Peru were in the bureaucrats’ offices trying to have their permits approved.

While in neighboring countries with new findings of oil fields extracting oil would have taken around 4 years, in our country that could easily take 17. That is why today, as oil is around US$ 60, Peru has the opportunity to redesign its whole system of procedures and permissions to make it intelligent, just, flexible, executable and highly competitive at the international level, while also taking into account the protection of the environment and indigenous peoples.

Naturally, these actions must be complemented with the advance of credits to infrastructure. The Southern Gas Pipeline is already being developed and its growth potential will be very important; another project to build a gas pipeline in the northern region is also being debated.

The lesson is that we should take advantage of this crisis to redesign Peru towards energy autonomy and security for the next five years.

We are a union that was created only two years ago. Out first task was to produce a white book of hydrocarbons, currently available on our website, with the aim of laying out an agenda to the government.

We actively participate in the Energy Commission of the Parliament to express what the sector’s needs are, and finally some months ago we produced the first report on the economic impact of the hydrocarbon activity on Peru, which also available on our webpage.

This report became relevant as it was the first time that it was made public how important this industry is and I think that is the contribution from the private sector, to make proposals.

I understand that Peru is a country with a big mining component; nonetheless, that should not work as an excuse to relegate an industry of our size.

That would be, in my opinion, what would contribute to rapidly promote the country’s growth, because when the price of oil eventually recovers, we should be ready to provide all the exploration advantages to the industry.

That is why this crisis stage is the best moment for government actions. We are conversing with a conscious and open State, but the circumstances of having a Government that is about to leave without a certainty of who is going to succeed it postpones decisions on certain policies.

How can you reconcile respecting the environment with the interests of the indigenous communities and continue attracting investment?

The first thing we need to recognize in this debate is that, in almost 200 years as a Republic, the Peruvian State has given its back to the needs and constitutional rights of the indigenous peoples.

This means that they are the most neglected by the government in education, health, security and fundamental human rights. Secondly, there is an asymmetry between big companies and these abandoned communities.

That is why during my mandate as Public Advocate I fought for the creation of the Ministry of Environment, because my perspective – shared by all the companies participating in the Society – is that the government has to be an arbitrator in matters of the extractive industry, protecting the most vulnerable, who are the indigenous peoples in this case.

The third issue to deal with is that in these conditions of isolation, as it is the case of the Amazon, when the oil company shows up and starts approaching communities through its social responsibility projects, the first things they ask for is precisely health, education, nutrition, electricity and basic rights, all of which should be obligations from the government and not the private sector.

However, from the observation of the social responsibility actions carried by the member companies of this society, you notice that in these issues they collaborate with the communities.

That is why social conflicts are not in the first line of problems of oil companies, as its relation - in general terms – with the communities is not bad. Besides, in order to be listed on the different stock exchanges, these companies are subjected to audits that include topics such as human rights and the environment, forming a virtuous circle. If we add to all this the fact that these communities know that the canon these companies pay makes up a big part of local governments budgets, the virtuous circle is always reinforced.

In the case of the environment, it is the same. Something that I quickly learnt in this industry is that environmental degradation is a human disgrace and that the protection that we owe to the planet is a moral mandate.

All of us have the obligation to take care of our home, to defend it and keep it well for the ones that will come after us. Furthermore, an oil accident is an economic catastrophe: that was the case of British Petroleum, as stocks plummeted and a third of the personnel was laid off.

No industry is immune to accidents, but the commitment is there. I oppose the positions that hold that the industry should be kept away from this country, as those benefits remain out of our system and do not reach the most vulnerable, making their isolation and poverty a permanent thing.

What are the relations of the sector with American companies? What is the potential for development and promotion of these investments, not only in terms of capital but also regarding the brands, as the big names of this industry are American?

There have been first-class American companies that have been here and now, due to the fall in oil prices, there are American hedge funds that are investing in these oil companies.

We are at a time of opportunities: whoever wants to invest in the hydrocarbons industry must look at Peru with interest; it is a modern country that grows and has a stable democracy with very solid institutions in economic matters, a sound banking system and a stock exchange that is integrating into the Latin-American Integrated Market (MILA).

All of this is positive and competitive internationally.

I think that we possess the values that a North American investor looks for: stability, clear and transparent rules of the game and protection of his investment.

On its part, Peru has a free trade agreement currently in force with the United States, it is part of the four more solid economies of Latin America, it is interested in joining the OECD and it has developed a private arbitrage system, meaning that it provides the conditions that are compatible with what the American investor demands.

Furthermore, we should not forget that the relation between the United States and Peru is optimal and respectful, with a good reciprocity and integration at the time of receiving immigrants in each country and with a lot to learn from the pending agendas that mutually reinforce each other, such as those of inclusion, cultural diversity and racial discrimination.

I hold a big admiration for the North American society, its values and above all the leadership that their corporate leaders practice and the way they see themselves as responsible of the growth of their country.

The way in which they conceive that the responsibility for the happiness of the society corresponds to the private sector and not the state officers is still a pending issue in Peru, whose leaders should learn how to look at themselves that way.