'The Key to the Southwest' 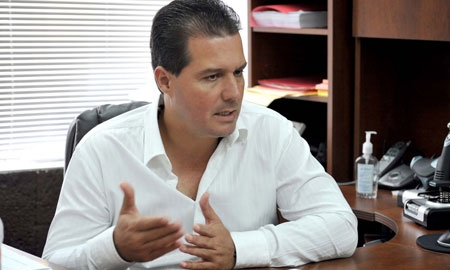 This is why it’s necessary to develop the infrastructure to take advantage of those FTAs. In the next few years, operation costs for ships will go up along with the price of oil, and with the new environmental regulations from the MARPOL Convention, ships will be obliged to use diesel (the same fuel that trains use today) – which is more expensive and refined than the fuel ships use today. For these reasons, shippers will be looking for the shortest maritime routes and the difference between the cost of maritime transport and land transport will be reduced.

Train transport is expected to become more commonplace as maritime transport becomes more expensive. Land bridges will make a comeback and grow, and shortcuts will be found.
The U.S. took in about 71% of Mexico’s exports. President Peña Nieto recently said at a conference in Sun Valley: “The U.S. has in Mexico, not a threat, but a commercial partner with huge investment potential.” What do you think about this statement and this bilateral trade and investment relationship?
Today more than ever, we can take advantage of our strategic position in the middle of the biggest trade flow in the world, as well as our proximity to the U.S., our FTAs, and the good relations Mexico has with the big trading countries.
The U.S. in Mexico’s biggest foreign investor, representing half of Mexico’s total FDI, which reached US$11.6 billion in 2011. President Obama recently described the two countries’ relation as: “not just neighbors”, but “friends and partners by choice”. In your opinion, in which sectors do you see mutual benefits for both countries and in which areas would you like to see more FDI in your city?
A natural sector for FDI in Coatzacoalcos is the petrochemical and oil industry. Nevertheless, we’ve put forth an economic diversification strategy in the city. We have a qualified workforce, port, road and rail infrastructure, and social and political stability. Coatzacoalcos could become a distribution hub for the Gulf of Mexico and an integration center for all the value chains that may develop between Asia and Mexico/U.S., offering logistical, transport and transfer advantages to the ports in Houston, Mobile, Miami and New York – the cities in the eastern U.S. and vice-versa.
The U.S. is talking about adjusting the trade balance with Asia, and in this realm Mexico can be a good ally. We have to take advantage of the trade imbalance that exists between China and the U.S.; in other words, take advantage of the flow of containers that return to Asia from the U.S., as 80% of those containers go back empty.

That’s why freight charges for the U.S.-Asia route are much lower (about half the cost). If we could load those containers with Mexican products or with American products that have been assembled in Mexico, and send them to Asia or Europe, it would be a huge logistical and commercial advantage for the U.S. The imbalance of trade flow – these empty containers – they’re the Achilles’ heel of global trade, and Mexico could be the ally it needs to help restore balance and improve the flow of global trade going back in the other direction. We could fill those containers that go empty via Mexico, and give shippers an important advantage.
What would be your final message to our readers on Mexico and its enormous potential?
I think that President Peña Nieto is laying the groundwork for a profound transformation in Mexico, and that the Trans-isthmus Corridor will be the biggest achievement of this administration – the one that will characterize the President’s administration. It will mark the beginning a new era of development and progress for Mexico, and one in which Veracruz and Coatzacoalcos will surely play an important role.