Interview - October 14, 2011
Mexico´s Secretary for Natural Resources and the Environment discusses the progress made towards protecting the country`s natural beauty under the Calderon administration. 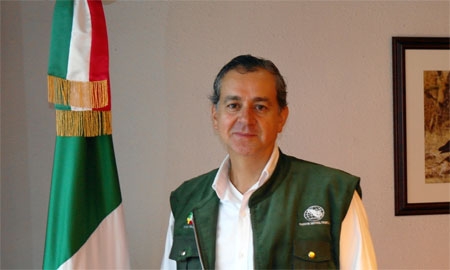 In our recent interview with Dr. Taleb Rifai, Secretary General of the United Nations World Tourism Organization at the headquarters of that institution in Madrid, he shared a powerful message: ¨Tourism brings wealth to the individual, to the family, to the community, to the country and to the whole world¨. How would you interpret this message?

Purely by coincidence, in Mexico there was an important survey among foreign tourists and they said they wanted two things: to be part of a campaign that communicates a specific message, such as protecting natural resources, and to learn something from the trip. To see a forest, a bay, the Monarch butterflies, archaeological sites such as Tulúm. Therefore we believe that Mexico is opening up a variety of options as far as natural tourism in concerned. We have a tremendous potential as a sun and beach destination, but the perspectives for the future are changing and that is what we want to develop. In February, we signed the National Tourism Agreement, whereby we committed ourselves to attract not only 4 million, but 6 million tourists to natural parks alone.

The second thing tourists ask for is the following: Mexico cannot offer much as a tourist destination if it doesn’t have a clear strategy as to how to protect its natural resources- its forests, its mangroves and its jungles. We have addressed this issue and, as a result, our environmental policy and climate change policy have seen important changes. And there are some specific improvements. For example, Cancún hosted 35,000 people for an event, and at the end of it the guests did not return to their home countries immediately, but went and visited different parts of Mexico in order to learn more about the country. We work on the premise that, in order to protect natural resources, we have to make people aware of those resources. We can’t simply declare those resources protected areas. Rather, we have to direct people towards them.

Moving on to the topic of the climate change, Mexico and the US just signed an agreement to that effect.

We have signed plenty of accords with the US, to the extent that it is financing many initiatives for the protection of forests and natural parks in Mexico. On October 24th we will unite two natural parks that are on both sides of the Bravo River on the US-Mexico border and we will devote over one million hectares to a bi-national protected natural area. The two presidents have agreed on this project and we want to communicate this bilateral effort to the international media, because we are taking a first step in using environment protection to eradicate illegal immigration. We will also release some black bears toward the end of the year as part of the agreement with the United States.

During your tenure as a Secretary, your institution added more than a million hectares to the National Protected Areas. Currently, about 13% of the national territory is made up of such areas.

Actually, it was not one but over three million hectares that we added and we reached 24.5 million hectares, almost 13% of the country’s surface, in natural parks. It is getting harder and harder to increase this number, because people do not want natural parks, they want cities, industry. But we still managed to expand these areas, so we accomplished our goal. We are now investing in park rangers and a management plan, among other things.

We have an international commitment to increase the proportion of protected areas to 15% of the land and 17% of the maritime area. We have to protect both, as it is stipulated in the Nagoya (Japan) protocol that the only way to preserve species of plants and animals is to protect their habitat. Mexico accounts for about 10% of the planet’s biodiversity, such as vanilla, species of pine trees, the jaguar, corn, to mention but a few. The country is like an accordion that came together, the tropical ecosystems occupy half of the country and the arctic and desert areas the other half. So the changes of species differ in different parts of the country.

Mexico is known for its abundant opportunities for beach tourism. Please tell our readers about your favourite tourist destinations in Mexico.

I have heard many times that Mexico is a very sexy country. Whales come here during their mating period and so do Monarch butterflies. And thousands of tourists come to watch the show. Thus, 900,000 tourists went to watch the whales in an area that is hard to access, 380,000 others came to watch the butterflies and 60,000 to watch the whale shark. More and more visitors associate this with a beach and sun vacation or with historical, gastronomic or cultural tourism. If we take ecotourism into consideration, we are talking about a whole range of interesting options.

One of the key attributes of your institution is that it seeks to capitalize on the national territory, even though it has nothing to do with the extraction of natural resources per say. What would you say is the importance of your institution in the development of tourism, since you manage much of the natural richness that tourists seek out?

Mexico is not a conservationist country. It is not a country that prohibits people from touching nature. We do not want to keep pets in cages, but rather to take people to the ecosystems so that they can see the quetzals, the royal eagles, whales, butterflies, jaguars and many other species for themselves. So the Secretariat is mainly looking to develop tourism in a sustainable manner, to stop illegal activity and to be accountable to the citizens who keep asking for more and more from us. Our responsibility is summarized in a six year vision, which aims to make up for past mistakes. Mexico lost the better part of its forests between the 60s and the 90s, and we have to try to recuperate that. We have to recuperate forests and jungles, water, air and biodiversity. And by protecting and caring for resources, and by working with the Mexicans to encourage environmental awareness we can show that we are proud of the resources we are protecting.

This year is the International Year of Forests, so it is important to talk about Mexico’s adherence to the goals of saving and protecting forests.

The city of Oaxaca will host a gathering of those in charge of protecting 60% of the world’s forests.  We will have forest managers coming in from Russia, Finland, the United States, Canada, Peru, Cameroon, Congo, Brazil and Indonesia. We would like these representatives to have contact with experts, students, forest technicians and agricultural engineers, among others, to tell them how they protect forests in their respective countries and to revive this topic, which was all but forgotten in the 20th century policies. An interesting historic detail is that, ten years ago, Sedesol, the Social Development institution, was in charge of the forests. Sedesol, however, abandoned this area, which was then overseen by the National Forest Commission presided by former President Vicente Fox. When the Commission was left without a budget, a certain MP fought to obtain 100 million pesos in funding for it. That MP was Felipe Calderon. At present, our budget for forest management has increased 16 times.

The gathering I mentioned earlier is called Megafloresta and it consists of a series of meetings, after which there will be visits to the forests that are certified. So it might be interesting to visit an internationally certified forest, where timber is extracted at a reasonable rate, designed to protect the habitat of the jaguar, for example. It is a matter of opening up new opportunities for tourism which do not involve parties or television. This is our vision of environmental policy which we are working to promote these days.

Please share a message with the readers of USA Today about Mexico’s efforts to protect its natural resources.

I have had the honour and the privilege to work with the most environmentally-conscious President in the history of Mexico. In five years, we have increased our budget from 24 to 71 billion pesos. And we have done a lot of good things with this money. We want to remain a country that punishes illegal activity and rewards environmental consciousness. But we still have a lot of work to do.