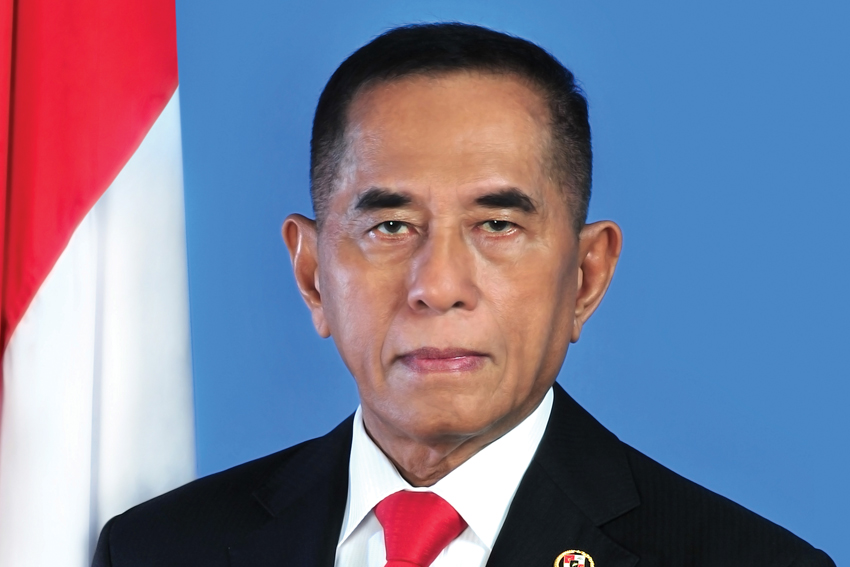 After your appointment in 2014 what have been your key priorities as the Minister of Defense?

As the Minister for Defense I should focus on the state’s defense, and to do that I need to identify any threat that our country is exposed to. I don’t see any threat of war for Indonesia and in the region. Threat of war will become reality if the nation’s sovereignty, safety and integrity are disturbed. However, I perceived those threats as a non-factual threat, because to the north side of Indonesia we have Asean countries as our neighbors. We already have the consensus within Asean that we are not going to be provoked into any kind of conflicts and together we have proven after 48 years that we can solve problems through diplomacy. To the south of Indonesia, we have Australia and New Zealand, neither is perceived as a threat and after a year as Minister, I keep in close communication with them. Of course, these non-factual threats can evolve to become factual threats whenever the nation’s sovereignty, integrity and safety have been disturbed, and we must have the capabilities to handle these non-factual threats.

Indonesia does face factual threats, including terrorism, natural disaster, natural resources poaching, insurgencies or rebellions, pandemic diseases, espionage and cyber war, and drugs or narcotics abuse. Of these factual threats, terrorism has been the most visible in recent times. The threat of terrorism is very real and it continues perpetuating. Indonesia is also very susceptible to natural disasters because of our location on the ring of fire. In terms of natural resources poaching, the major issue has been maintaining our maritime sovereignty in the face of illegal fishing. Pandemic disease is also a factual threat because we are located in a tropical area, so we are susceptible to any kind of outbreak affecting tropical countries. In terms of drug abuse, everyday 50 people die as a result of drugs, which is 18,000 people in a year. This has led us to consider the drug threat on the same level as the terrorist threat.

For both the non-factual and factual threat, we are preparing ourselves to face these threats by renewing our major equipment, revamping and upgrading our technological capacity so we can meet the demands of modern military and security services.

What sort of equipment and procurement are you undertaking to make sure that you are ready to tackle these threats?

As one of the largest and most expansive nations in the world, we must build our defense capabilities to reflect our size and objectives, meaning major equipment needs to be modern and advanced. Our number one priority is therefore to replace the major obsolete equipment, including our 30-year-old fighter jets, as well as our older vessels and ships. It is also important to ensure that the armament these new acquisitions carry are up to modern standards and capabilities.

Indonesia is a country that doesn’t like war; we love peace. However, we need to be aware of any incursion into our territory, so we need to deploy a radar system that will fully cover our territory. We would also like to develop our airlift capability. This will be very important when faced with natural disasters, for example a landslide in any part of Indonesia; we need to be ready to send Rapid Deployment Forces. We cannot afford to let any people die because we are late in helping them. We have to come as soon as possible to reduce any casualties in these areas. This airlift capability serves a dual purpose in that if there is any military threat or incursion we can send rapid deployment troops to the affected area.

In 2014 we were very fortunate that we could meet the private companies that were working with the Ministry of Defense to fulfill Indonesia’s defense needs. How is Indonesia progressing in reaching its goal of defense self-sufficiency?

The more private companies involved the better, so that they can compete to provide the best equipment, and especially maintain the major equipment. There are 200 shipyards in Indonesia, but only 20 are appointed to build ships and vessels for us. We can ask them to build Armed Personnel Carriers, vital aircraft, vessels and drones.

With new regulations meaning 49 percent of an Indonesian defense company can be foreign owned, there are also opportunities for greater partnerships and technology transfer. We are currently in partnership with some Italian companies to build an armament factory. We would of course welcome further partnerships like this where there is also a high degree of technology transfer. Beyond these defense specific companies, we also have the capability to redirect strategic industries to be converted to defense industry if the need were to arise.

Indo Defense Expo & Forum 2016 is approaching soon, what would the Ministry of Defense like to see as an outcome of this event?

Primarily the event is to showcase our defense industry capability both in private and public sectors. Beyond that it is an opportunity to share knowledge and expertise from both sides. We try to seek for potential partners with whom we can collaborate together in the future to build our major equipment. The most important thing is what we can learn from other companies and deepen cooperation with them.

When President Jokowi visited the US in 2015, there was an announcement of a strategic partnership between the Indonesia and the US, particularly in maritime defense cooperation. How will this partnership enhance Indonesia’s cooperation and capabilities?

To follow the strategic partnership formed between President Obama and President Jokowi, we signed a partnership with the US in the defense field. This MoU (memorandum of understanding) stipulates the depths of the cooperation and we agreed on areas where we should tackle these common factual threats together, the primary factual threat being terrorism. To tackle terrorism we have to have a collective effort and response between countries. We cannot do it alone, we have to have cooperation between countries. Beyond terrorism, we also have agreements to tackle drug trafficking and cybercrime, through sharing information and expertise.

Another major area of cooperation is in the maritime sphere. We agreed that we should exchange our coast guard, BAKAMLA (Maritime Security Agency), and work closely with the coastguard of the US We would like for sure to step up our cooperation in these areas that I mentioned.

You have a very unique approach to defense theory, particularly when it comes to terrorism. Tell us about the Bela Negara program.

Yes, we are unique in how we are tackling terrorism. In every country I visit, they said that terrorists should be put down with anti-terrorist troops. For me, I believe we need to first tackle the belief system that sees people radicalized. We have to come back to our identity and our nation. Our identity is Pancasila, which celebrates our great diversity. It is not true when ISIS said that killing could take us to heaven, it is not written anywhere in any religion. That is why I said we need the Bela Negara program (literally “defending the country”). This is a program created by the Ministry of Defense to ensure growth in Indonesian’s nationalism based on Pancasila and the 1945 Constitution of the Republic of Indonesia. Bela Negara becomes our signature in tackling terrorism. It turns out that there are several countries that want to learn about this with us, for example Zimbabwe, the Philippines, and the UK. Each country is unique, and what makes us unique is Pancasila. That is why I keep on touring around Indonesia to socialize and communicate the Bela Negara concept through the true teachings of Islam.

Imagine, Indonesia’s population is 250 million and from 250 million, we have a Muslim population of 200 million. The ISIS group has not more than 200,000 people all over the world and only 30,000 are the hardcore jihadists. With these numbers, they can already shake and threaten the world. Can you imagine if only 1 percent of Indonesian’s Muslims became radical? It would be the end of the world. So, it is my role as the Minister of Defense to remind them the true Islamic teachings and to come back to our identity, Pancasila.