Interview - October 14, 2011
The Secretary of Tourism of Mexico talks about 2011 as the Year of Tourism in Mexico and the country´s tremendous potential to become one of the world´s top tourist destinations. 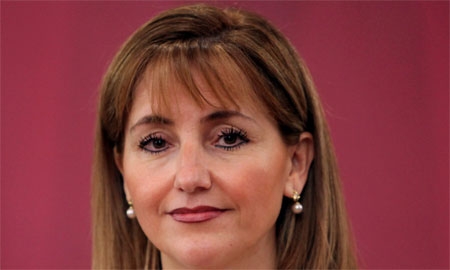 GLORIA GUEVARA MANZO | SECRETARY OF TOURISM OF MEXICO
In our recent interview with Dr. Taleb Rifai, Secretary General of the United Nations World Tourism Organization at the headquarters of that institution in Madrid, he shared a powerful message with us: ¨Tourism brings wealth to the individual, to the family, to the community, to the country and to the whole world¨. How would you interpret this message?

I totally agree with the statement above. In our case, tourism contributes 9% of GDP which, compared to other countries, is a significant amount. It also creates 2.5 million direct jobs and 5 million indirect ones and is the third most important source of income. It is obvious that it is the best opportunity we have because of the richness of our culture, history, gastronomy and the varied attractions we offer to national and international tourists alike. Tourism also allows for integration and engaging of the whole family, which makes its importance even greater.

Could you give us your assessment of the development of tourism in Mexico over the past few years?

2008 was the best year in the history of tourism worldwide. In 2009, we were negatively affected by the economic crisis and the influenza outbreak. By 2010, we were basically back to the same levels of 2008, although the rates charged by hotels and airlines had decreased all over the world and have not yet bounced back to the levels of 2008. We are working on a host of initiatives and are making progress. For months we worked on developing a common agenda and this past February we had an unprecedented event. And that event consisted of the fact that the Federal Government, the state governors, legislators, universities, unions, and the private sector such as hotels, restaurants and airlines signed an agreement to reach a single objective, namely to place Mexico in the top five destinations in the world by 2018. We are now in the top ten. But we need to implement over 100 projects and to comply with over 100 commitments, which are all clearly delineated. We have made a progress of 30% towards our goals, which is a good base to foment fast growth in the tourism sector. We have to increase the number of foreign tourists from 22.4 million to 50 million, of national tourists from 161 million trips to 300 million trips and from a spending of US$ 12 billion to US$ 40 billion. These are the parameters we have to. We are not including the 6 million tourists who arrived on cruises nor the 51 million day-trippers who crossed the border, did some shopping, went to the doctor and then went back home. We are only including those who staid for the night in Mexico.

There is a delicate topic which is affecting Mexico’s international image right now and that is insecurity. Dr. Taleb Rifai mentioned that, in actuality, this is a world-wide problem and that is portrayed mostly in connection to Mexico by subjective media sources. What do you reckon are Mexico’s main strengths in the fight against violence?

Indeed, this is a worldwide problem and not just a Mexican problem. 9/11 radically changed international travel. Spain and the United Kingdom have their risks as well. Now, Mexico is a very big country and unfortunately people are not familiar with our geography. Mexico has many municipalities. We have 2,500 counties, 80 of which are challenged in terms of security. So when you put things into perspective, it is less than 5%. The risk is very localized, particularly around the border. When people talk about Mexico, they do not talk about a place in particular, but about Mexico in general. Whereas when something happens in the United States, they specify where it happens, like in Arizona, so that people know not to go there. The same goes for Spain. This is not helping us and we are working with the media to help put things into context. According to the latest data, from January to June 2010 we received 13 million 100 thousand international tourists, whereas from January to June 2011 we received 13 million 600 thousand. That is a 4% increase for the first half of 2011. Tourism is growing and not just by land, but also by air. Another interesting fact is that we had an increase in the number of nationalities that visited Mexico this year, which reached 144. The economies that are performing well are also sending more tourists over. Almost 17% of the foreigners who visit the country are Canadians. Their number increased by 7%, while the number of British visitors grew by 10%, of Argentineans by 14%, of French by 12%, of Brazilians by 46%, of Colombians by 27%. Other data is even more eye-catching: the increase in the number of Russian visitors was 58%, while the increase in the number of Chinese visitors was of 30%. Let’s look at other nationalities, like the United States. According to the US Department of Commerce, 40 Americans travelled abroad in 2008, as opposed to 34.5 million in 2010. That is a significant decrease. At the same time, Mexico is the number one destination for Americans. 16.5% of them come to Mexico for business, pleasure or tourism. Although the American economy is struggling, Americans still come to Mexico and they represent 48% of all the foreigners who visit Mexico.

So it is very important to put things in context. Tourists should grab a map and look for Cancun, for example, which is very far away from Tijuana. It is comparable to the distance between Madrid and Moscow.

2011 is the Year of Tourism in Mexico. Could you expand on this topic?

President Felipe Calderon sees tourism as a great opportunity. In January he decreed 2011 as the Year of Tourism in Mexico. That is why we signed that agreement with a sole objective in February. For the first time, tourism is a national priority and, together with that, the governors are supporting tourism. Legislators also contribute to the agreement. The agreement has ten strategic axes. Each action will have its axis and everyone knows very well what they are doing. It’s the first time in history that the whole country is working towards the same objective. The UNWTO, which has represented tourism worldwide for years, and the WTTC, which represents private companies in the sector, celebrate leaders who promote tourism in their yearly joint Golden Book and this year they recognized President Felipe Calderon for his dedication to the development of tourism.

We have studied what other countries have done, like Spain, Turkey, and Malaysia, and according to what I have been told it is nothing like what we are doing right now. It is a pleasure to work with UNWTO and the WTTC, because they have a converging view on what needs to be done. Next year, President Calderon will preside over the G-20, and, for the first time for this organization, he will address the importance of tourism.

Mexico is a popular beach destination and a destination for cultural tourism as well. It is one of the four countries with the most World Heritage Cities in the world, according to the UNESCO. What are the advantages of this type of tourism and how is it helping to project Mexico’s image internationally?

Mexico is famous for its beach destinations. Cancun is a construct, it did not exist 40 years ago and it has become an international icon. And by coupling cultural and beach tourism or cultural and adventure tourism, we can increase our revenues. We have 37 World Heritage sites; our cuisine is also one of the two cuisines recognized as World Heritage in the world. We have 40,000 archaeological sites; we are the top destination for spas in the world. There are 72 different ethnic groups living together in our country, like the Mayas who maintain their traditions to this day, and that creates diversity. If you add all this to the hospitality of our people, which is often praised by visitors, it explains why tourists come back to visit. This year we interviewed over 10,000 visitors and we found out that 98% of them had been here before. 98% is a very high number. According to different statistics, 99% of tourists would recommend Mexico to their family and friends.

Those who visit our country realize there is a big difference between perception and reality, while those who do not draw their conclusions from the media. As our President has it, hospitality is part of our DNA.

I would like you to share a message with foreign investors active in the tourism sector and who have their eyes on Mexico.

For investors, the most relevant aspect is that tourism performed better in the first quarter of this year than in the first quarter of last year. For instance, the Spanish, who have invested a lot in hotels in our country, told us that the return on investment is higher than in their own country. But foreign investment is growing not only in tourism, but also in other sectors like automotive and manufacturing. Investment is growing overall.

As for tourism, Rosewood, one of the most well-known luxury hotel chains in the world, opened a hotel in San Miguel de Allende. We are seeing new investors in Mexico. IHB announced that they would build 47 new hotels in the next three years, which goes to show that we are on the right track as far as investment goes.

We do not just have sun and beach here, we also have a lot of culture. In June, the President inaugurated the Maya World initiative in five states where there are archaeological sites, so that people learn about and understand our culture.

Here, you can swim with the whale shark that feeds itself with plants only to be found in Mexico. We also have the cenotes, which are exclusive to Mexico. You can also do adventure tourism, in the same visit, in the same place, and if you add the cuisine it gets even better. It is incredible, but in Mexico we have so many dishes, you can eat a different dish every day and not have to repeat that for the rest of the year.

Please share a final message with our readers and future visitors.

Come and be amazed by Mexico. And if you have doubts, ask those who have already been here. Do not be influenced by sensationalist press coverage. Going back to the same numbers: 22.4 million visitors every year cannot all be mistaken.