An active member of the African hospitality sector, the presence of the Radisson Blu brand in Freetown signals to the world that Sierra Leone is a safe and secure destination for all visitors, businesspeople and tourists alike. General Manager Johan Klang discusses the hotel’s symbolism of the country’s potential to develop its tourism to the world, how it blends the brand’s renowned features with local traditions, and its resolute stance to remain open during the EVD outbreak and be part of the nation’s recovery. 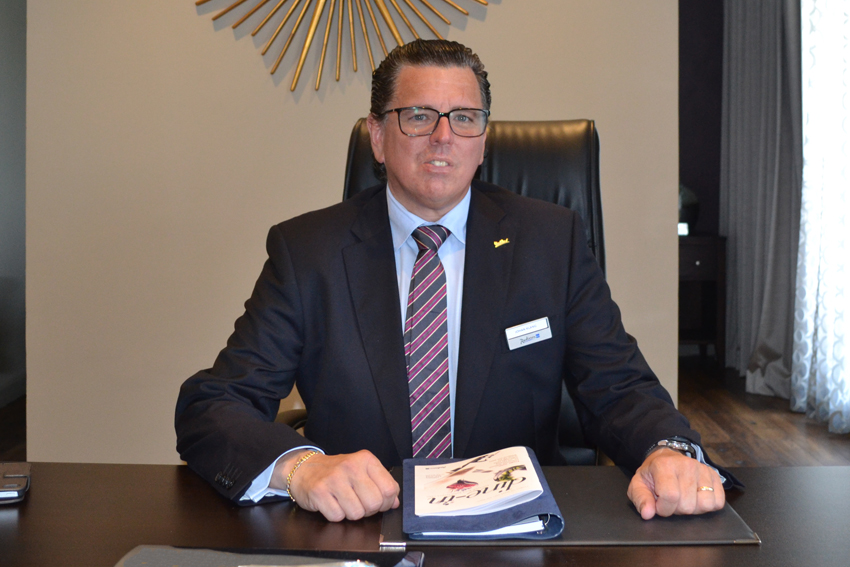 After been declared Ebola virus disease (EVD) free in March, Sierra Leone is showing once again its resilience, working to retake the fast-developing model of the years to 2014. What are the main challenges, in your opinion, that remain to put the country back into the pre-EVD outbreak growing path?

In our global interconnected world, Sierra Leone is dependent on the world market prices for mineral such as iron ore, diamonds or rutile. However, the current government is clear in its objective to have a stable economy not just based on the mining industry. They have identified agriculture as a major key source to develop into a strong part of the national economy. Other African countries are already successfully exporting fresh fruits, vegetables and even flowers to Europe by plane every day. Sierra Leone has all the possibility to also be a regular supplier to Europe. Tourism is another key source in this economic diversification; this is an industry that has the potential to be a major employer, usually employing more staff per invested dollar than other industries.

One of the main challenges that Sierra Leone faces in growing the tourism sector is the image of the country amongst the potential arrivals. Too many people have the wrong image of this fantastic country; it is the task of all of us in the hotel and tourism industry, as well as others in Sierra Leone, to change the international perspective of this country. I have no problem in telling my friends and my guests that Sierra Leone is a safe and secure destination with amazing people.

Other important issues include the how to make travel to Sierra Leone easier. There are ongoing discussions with the Ministry of Tourism, the National Tourism Board and other authorities where the issues of visas, airports, infrastructure and transport are being discussed, all with the goal to make traveling to Sierra Leone as easy and hassle free as possible.

How would you define the international visitors coming to Sierra Leone?

International tourism arriving to Sierra Leone represents between 1% and 2% of the total arrivals. The bigger leisure segment that is arriving is the Sierra Leone diaspora coming to visit family and friends. They do not use hotels that much as they stay with their families or friends. The rest are a mix of business people, aid agencies and official visitors to the country. The potential of tourism is huge. In Gambia, the tourism sector is currently the most important one for their economy. I believe that in Sierra Leone we can achieve the same.

One of the main objectives of the Agenda for Prosperity (A4P) is to attract and diversify FDI to the country and to boost private sector investment, now estimated at only 10% of GDP. It is also concentrated on a few sectors, such as mining, with limited direct impact on growth and employment creation. Beyond mining, what is the potential of the tourism sector for foreign investors?

I am personally convinced that, from by 2025, tourism would represent between 20% and 25% of the Sierra Leone economy. If we look at Thailand 30 years ago and look at its growth to what it is today, Sierra Leone has all the potential to develop into a major tourism destination.

Radisson Blu, as a Carlson Rezidor Hotel Group Brand, features 380 unique hotels around the world. Why did you choose to open a Radisson Blu in Freetown?

The Carlson Rezidor Group has over a 15-year presence in Africa since we opened our first hotel in Cape Town. We are today one of the two leading international hotels brands in Africa with 28 hotels operating on the continent and with over 15 more projected. During 2017, we will open properties in South Africa, Ghana, Nigeria, Kenya and Rwanda. We are an active member of the African hospitality sector. Our brands are, in many cases, the first international hotels to arrive to an African city, and often, the leading hotels of the country.

In Sierra Leone, Radisson Blu Mammy Yoko was the first internationally branded hotel to open after the rebel war. The building was opened in the 1980 as a hotel and was operated by a French group for about 10 years. Today the Radisson Blu Mammy Yoko Hotel is the leading hotel here in Freetown and Sierra Leone. We welcome the opening of other international brands in the city over the next years as recognition that Sierra Leone is a safe and secure destination with the potential to become a leading tourism destination for the international market.

How are the Radisson Blu hotels’ features mixed with Sierra Leone’s traditions?

The Radisson Blu Hotels have their DNA from the SAS Airlines Hotel Group; they opened their first hotel in 1960 as a design hotel by the Danish architect Arne Jacobsen. We have always designed our hotels with a Scandinavian atmosphere: open spaces and simplicity are some of our main features. At the same time, we are in Sierra Leone, so we want our guests to feel the joyful Sierra Leonean welcome. This is why we have used local handcrafts for some of our interiors, local clay pots, local artists with views of Freetown, and furniture for the business lounge that are made locally. The uniforms that our staff wear are based on international styles but have local influences, especially the new restaurant uniforms.

The hotel started operations barely two months before the EVD outbreak. The former general manager, during the height of the epidemic brought his family to Sierra Leone to boost the confidence of workers and guests. The hotel remained open when others were closing. For all this resilience, in 2014 the hotel was the second one in history awarded the Carlson Rezidor Adversity Award. Could you tell us more about the EVD outbreak period and how the hotel remained opened despite the difficulties?

When the EVD outbreak started, a discussion took place about remaining open or to close our operations in Freetown. The General Manager at this time (Mr Nuno Neves) spoke strongly to remain open, so that the Radisson Blu Mammy Yoko could assist Sierra Leone during this time. Our location in the Aberdeen part of Freetown and the fact that the hotel is located in its own large grounds, meant that we could set up an area where we, with the help of the local authorities and aid-agencies, could maintain a zone with strong hygiene routines. We worked hard so that the guests and the staff could feel safe. We carried comprehensive training sessions with our staff and we even offered some of them to sleep in at the hotel.

The hotel hosted many aid agencies during this time and we are proud to have been able to assist so that the EVD was controlled and eradicated. During the EVD outbreak The Radisson Blu Mammy Yoko Hotel hosted many visitors including such as the UN Secretary-General Ban-Ki-Moon or former British Prime Minister Tony Blair.

The Ministry of Tourism, Mr Tunis, told us that for him, Sierra Leone is “the hidden paradise”. However, as a tourist destination, other countries in the region as Senegal, Gambia or Ghana are far more well known. We have seen your offer of Sierra Leone experiences with trips, activities and even through gastronomy by serving Sierra Leone delicacies in The Deck. How do you see the Radisson Blu Mammy Yoko as some kind of Sierra Leone brand ambassador?

We hope that the presence of the Radisson Blu brand in Freetown signals to the world that Sierra Leone is a safe and secure destination for all visitors: business or tourism. Increasing tourism arrivals to any country takes time, and we at the Radisson Blu Mammy Yoko Hotel want to ensure that arrivals to Sierra Leone will increase. The hotel works closely with the Minister of Tourism, with the National Tourism Board and with other hotels in the city so that the image of the country will become stronger.

At this time there is a group of 12 German travel writers and travel agents that are doing a 10-day tour of Sierra Leone hosted by the National Tourist Board. The Radisson Blu Mammy Yoko was proud to host the group during their first night and that the leaving event was also held beside our pool. By participating in these types of events, also by marketing our property and by ensuring that our guests get a great stay, I believe that we are contributing to changing the image of Sierra Leone internationally.

The Radisson Blu Mammy Yoko Hotel houses a travel agency partner at our hotel, and through them we can help organize trips to the mountains, beaches and national parks of Sierra Leone.

With over 30 years of international hospitality industry experience, working in Africa and Europe, you joined the Carlson Rezidor Hotel Group in 2010. Now, as the General Manager of the best hotel in the country, where do you see yourself in the next five years?

I have been working in this industry since I was 17 years old. I started washing dishes as a summer job in Sweden. Since then I kept on working for the hospitality in different positions, I have obtained my Master’s Degree in Hospitality & Tourism and I have now reached the position of General Manager. I really enjoy managing hotels, especially when facing the challenges of working in developing countries. This is why I see myself still in Africa in the next five years, maybe not in Sierra Leone, maybe in a different Radisson Blu Hotel. For me, I am happy doing this job on this continent. I enjoy taking a building and transforming it into a hotel and meeting my guests, my staff and my partners.