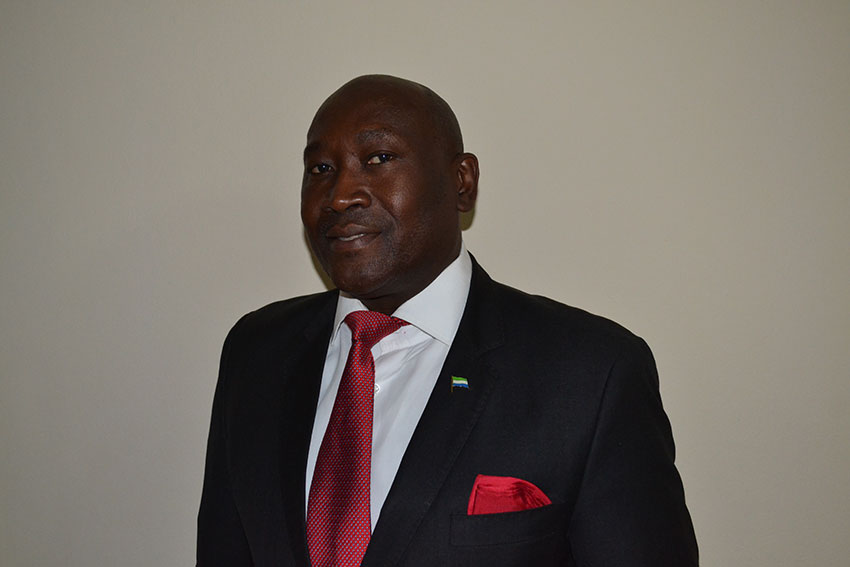 What should be the role of the energy sector in Sierra Leone’s plan to reach the middle-income status by 2030?

Energy as a significant enabler has a key role to play in both our current economic recovery and in our vision to reach the middle-income status. Energy is also critical for the development of a country and the stimulation of its economy to grow. In Sierra Leone, we need to provide the foundations of an environment where businesses can operate and thrive. The post-Ebola Recovery Strategy and the Agenda For Prosperity as initiatives launched by our President, are directed towards enabling Sierra Leoneans  to make the necessary leap forward. However, entrepreneurs still face extra difficulties as they do not have sufficient access to electricity.

In 2014, when I took office, the President gave me the mandate to increase the country’s power generated capacity from the existing 100MW to 1000MW. We elaborated a very clear Energy Strategy Plan to achieve it. Our vision was that this electricity would not be only directed to supply individual customers that want to use their appliances, but would also  extend to industrial customers which are a key support pillar for our economic recovery. With available electricity, we can stimulate investment; energy is a major factor when decision-makers study future options. With a reliable supply of energy, operational costs will decrease. Presently, the industries in Sierra Leone, such as the breweries and manufacturing factories, have to rely on their own generating plants. Implicit in this are costs and labour associated with the purchasing of the plants, their maintenance and  especially, buying fuel oil or diesel on a daily basis. This increases the final cost of the output. Aside of the big industries, our larger pool of smaller entrepreneurs need energy too, from the women that sell cold beverages to the man doing carpentry work.

We must not forget our mining sector, which also requires substantial amounts of energy. It is not a secret that Sierra Leone has large amounts of iron ore and other mineral resources. However, the cost of extraction today here is greater in part due to the lack of a reliable and affordable source of energy. When this is resolved, we will be able to attract new foreign investors that will consider installing smelting plants locally, improving the quality of the product before shipment. It is a good business for everybody and at the same time, jobs will be created.

Also in education energy plays a fundamental role. We have been observing that students coming from areas without a reliable electricity supply are not consistent performers at school due to lack of continuous electricity. Energy is thus fundamental for a brighter future for our country.

With your government being aware that reliable, affordable and accessible power is the cornerstone of your economic development, your Ministry launched a 5-year Road map to increase the generation capacity to 1000 MW by 2017. This plan requires a structured approach to private investments in the sector. What have been the policies of greatest success and where do you see the greatest need for improvement?

Conventionally, we see that demand creates supply. However, with electricity we have experienced the opposite seeing that supply creates more demand.

In order to guarantee electricity provision, a holistic approach must be taken, including a regulatory reform, a powerful and diversified generation system and good transmission and distribution networks. The area in which we are lagging at the moment is in generation. It is unfortunate that we have not made as much progress as we should, given the amount of effort, creativity and energy we have put into developing our generation capacity.

We have experienced several constraints that delayed our plans. Nevertheless, we have also seen several achievements starting by an increase in the customer awareness and customer service of the energy sector. One of my mantras is “Light is a Right” as we consider that to have electricity is a right. Another of my mantras is “Electricity is Everybody´s Business”. Now, in Sierra Leone, we do not have electricity consumers anymore: we have customers.

Until 2014, the national utility company was government owned. On its privatisation, it was unbundled by separating the generation and transmission operations from the distribution and supply operations; a model which has proved successful in other African countries like Nigeria and Ghana.

The newly established utility companies have therefore had to look for their own income and become self-sustained. A regulator was also established for the sector. Guiding the   mindset of the new utilities into a business driven one was a major challenge I faced when I arrived at the Ministry. Now, faults are repaired faster: the loss of income is better appreciated as it is directly linked to the salaries of the employees. Government subsidies are also being eased out because our current system has become performance based. This is an important achievement. The appetite for electricity is also growing as we have seen a multiplication by ten in the figures of people requesting new connexions. This is a result of the increasing expectations created by our new model.

Over 650,000 tonnes of crop wastes are produced annually having a high annual energy potential of more than 2,500 GWh that can be exploited for cooking, lighting and motive power applications. What are the recent developments of your Ministry regarding biomass?

The Addax Bioenergy Project is one such project the Government has welcomed. It produced sugarcane ethanol and offered renewable electricity from the biomass to power its operations and provide the excess energy to the national grid.

As with many other businesses at the time, the project was affected by a number of unexpected problems including the Ebola outbreak in May 2014. Presently the project has been transferred to a group of investors led by Sunbird Bioenergy Africa. We hope the project can now realise its objectives and positively contribute to our clean energy goals.

Of course, generation is just one part of the chain to achieve a reliable supply of energy. Transmission is critical too. The access to the West Africa Power pool has proven critical in ensuring the required energy supply for Sierra Leone demand of power. The interconnection with Côte d'Ivoire, Liberia and Guinea was due to be completed this year. What is the current status of this interconnection? Looking to inside Sierra Leone, what are the main improvements that you have implemented in the transmission network? What are the biggest opportunities for foreign investors on this regard?

At present, the WAPP Project Agreement has been signed by the Ministers of the CLSG countries (Côte d'Ivoire, Liberia, Sierra Leone and Guinea) and it is expected that construction for the lines will commence by the second quarter of 2017 and be completed by the end of September 2018.

For the transmission network, we recently concluded an upgrade on a key network in the east of Freetown providing much needed access to over 20,000 homes. This was an IDB (International Development Bank) funded project. With the support of JICA (Japan International Cooperation Agency) we are also presently rehabilitating the network in the west (11kv and 33kV lines). In the provincial towns, much needed rehabilitation and expansion work is planned for the Bo-Kenema Axis. (DFID and AFDB funded).

Foreign investors will be interested to learn that the government is about to review the national Electricity Act. It is expected that one of the key aspects in the review process will be the consideration given to private investors that will open new opportunities to invest in the  development of our transmission network.

Beyond interconnection, off-grid technology will also play a vital role to rural Sierra Leone population, where currently less than 1% have access to power. What are the investment opportunities arising in this needed off-grid technology?

The majority of our population uses solid fuels and coal to meet their basic needs, yet causing detrimental effects to their health. To provide access to clean and renewable energy, the Energy Africa Campaign was launched in Sierra Leone in collaboration with the Government of the United Kingdom, at the Energy Revolution Expo held the 10th May 2016.

The Compact outlines bold energy access targets: Power for all citizens by 2025 (5 years ahead of SDG7 and Energy Africa Access Campaign target 2030) and modern power to 1 million people in Sierra Leone by 2020. To set the pace, the government of Sierra Leone has set a target rollout of at least 200,000 units by the end of 2017.

The Rural Renewable Energy Project sponsored by the DFID and implemented by UNOPS is an example of a project meeting the Compact objectives. This year, the project will provide more than 50,000 homes with solar units and increase access to public services through the electrification of priority institutions such as Community Health Clinics, schools and agricultural business centres through 6kWp PV installations. At least 5,000 solar lamps will also be provided to potential customers on a pay-as you-go basis to further increase the interest in solar products.

Additionally, through private investors including the Renewable Energy Association of Sierra Leone (REASL), various models have been developed to provide nationwide access to energy through solar home systems. A number of opportunities remain for other investors, as we are still a long way from achieving our rollout target for 2017. We continue to look to even to meet needs beyond 2017.

The UK is not only Sierra Leone´s largest donor but also one of your key trade and investment partners. In the energy sector, Sierra Leone was the first country participating in the UK's Energy Africa campaign to sign an energy agreement. How would you like Sierra Leone to be perceived by UK investors?

The UK has staunchly supported Sierra Leone through every step from crisis to recovery and forwards to development. I believe it is because the UK recognises that the Sierra Leone Government is serious about changing the trajectory of its progress. For energy in particular, this has been shown by us being the first country to sign an energy compact agreement and do so with the UK. UK investors should therefore see this as evidence that Sierra Leone is open to developing clean and renewable energy and that we welcome businesses looking to enter the market to provide energy supply and support services.

What is the final message you would like to address to our audience?

We must not underestimate a nation’s appetite for electricity. It cannot be said that the manner in which one country increases its demand for power will be mirrored by another. The telecoms sector in Sierra Leone is a case in point that proved wrong all expert assumptions and growth forecasts.

Today technology has not bypassed Sierra Leone and our young are as hungry for more gadgets as any other. Even in the most rural of communities, charging sales kiosks for mobile phones are prevalent and notwithstanding the high cost per charge to the consumer.

It is therefore important that any support to be given by a third party or donor agency looking to assist our development plans must support us not according to their assumptions and past experiences elsewhere but based on a model tailored and sensitive to us. The model has to capture our unique characteristics and variances as well as our aspirations and dreams. In short, any support must be to help achieve our agenda and not theirs or any other.

Do not starve Africa of energy.