Interview - July 8, 2013
With Mexico having recently been voted the world´s second most luxurious destination by the renowned travel network Virtuoso, the CEO of Questro Group Eduardo Sánchez Navarro tells Wordfolio how his company are leading the way in this lucrative area. 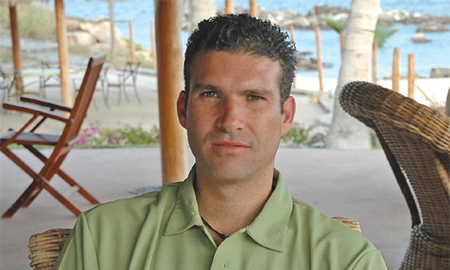 EDUARDO SÁNCHEZ NAVARRO | CEO OF QUESTRO GROUP
What would you say has contributed to the fact that Mexico is now receiving such acclaim in terms of a place that offers “luxury” for its tourists?

One of the factors is that Mexico has an impressive and privileged geographical location; we have the best beaches, as well as the warm people who provide a pretty good service. We also have a special climate almost the whole year, and a neighbour country which has about 300 million people with a high purchasing power and who usually travel in winter because the climate is extremely cold. This, combined with good promotion is what makes Mexico this power.
Questro Group is currently a leader in the sector with your development throughout the country. Above all you are undisputed leaders in los Cabos. Tell us about the virtues of the group that have managed to place them as leaders?

We have mainly worked in first housing developments, in other words it means to meet a metropolitan area demand of about 25 million people seeking to buy a home. The other part in which we participate is in tourism development in which we have growth opportunity.  One of the cities in which we think we have this projection is in Los Cabos because it is next to American cities such as California and Texas, with the opportunity of attracting many tourists from those places.  Another city to which we are committed is Acapulco, and as we know from the proximity to the City of Mexico, it is the favorite beach destination by the consumerist society.
One of the virtues we have is the promotion in specific and focused markets to which we want to reach. It is very important for the Government to solve the bad situation of insecurity in Guerrero, and this is a factor which affects us because the consumerist society no longer buys properties there.
The branches in which we are divided is the first housing or the development of a Resort which could have a chance of success, the other part of the group is the hotel and Holiday club and we currently only have it in los Cabos.
Which is plan of development within Questro group? And which would be the strategy that you are going to focus on?

It is a much diversified group because it has different business units and our strategy goes by business unit. Right now we are focusing a lot on the hotel side - we currently have around 900 hotel rooms and we are building a 500-room hotel, so that is why we are making a very strong and a very important investment in that side.
We will continue with our share of residential developments that are long term ambitious developments, and we continue with the real estate sale in which we have institutional associates and private investment. Our largest and most ambitious project is the Puerto los Cabos, since we have included a fisherman's village. Altogether we have 800 hectares here, including 6 hotel lots and 2 golf and marine trade fields, so it is an integral project. We are very proud of this project and we are very ambitious.
At the moment we have 5 hotels and the sixth which is under construction, so we are growing.
The Government is planning to turn tourism into the engine of the economy. What do you think are the key points towards achieving this?

Firstly, to understand and believe that Mexico can become not only rank number 10 in tourism, but eventually taker first place.  Since there is a strong capital input, and since the Government had understood that part, it would be to put it as a priority and assign the resources to achieve it. It is a strategy we need to make clear.
We also have a young and proactive tourism Secretary and a Touristic Promotion Manager named Rodolfo Gómez Negrete who is very capable and this objective very clear in his mind. It´s now a strong priority (for Government) since the President presented the new strategy for tourism, as well promoting it.

Which message would you like to transmit to the British investor who can come to Mexico?

Mainly that they should know that there is a change of perception, attitude and Government, and that a very interesting era for Mexico is coming. If we talk about tourism, with the many attractions that Mexico has to become a great power in the field, whilst also having taken into account that it is a priority for us, we are definitely able to capture a higher percentage of tourists and  be within the first five destinations in the world. With that, I would like to let investors know that we are open to any investment.