Paul Griffiths, CEO of Dubai Airports, says that Dubai has taken the concept of “hub” to the next, intercontinental level. With the Strategic Plan 2020 and a $32 billion expansion, Dubai Airports is ready for Expo 2020. 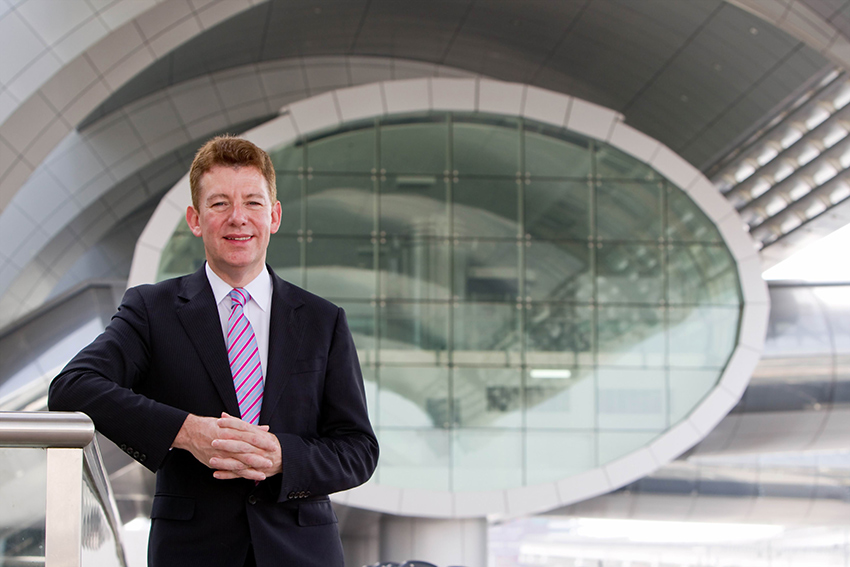 Many major cities in the world claim to be a “hub” of some sort and the word has become somewhat commonplace. Is it a buzzword when it comes to Dubai as well?

There have been three generations of hubs. Initially, there was the domestic hub. Examples of this include Atlanta, Cincinnati, Chicago or Denver, where domestic airlines in large areas such as the U.S. were able to establish a base and then operate into many cities near that central point they used as a connective place.

Then continental hubs emerged, places like Frankfurt, London Heathrow or Paris in Europe, and Singapore in Asia.

These hubs applied the domestic hub concept on a regional and international basis, drawing regional traffic from a catchment area and connecting it onwards. Amsterdam is a very good example.

It uses the U.K. as its catchment area, with various connecting flights from cities all over the U.K. drawing traffic into Amsterdam and then redistributing it onto long distance routes.

That has given us the ability to connect intercontinental flights through Dubai. Moreover, because of advancements in aircraft technology enabling longer-range flights, now there aren’t many places that you can’t reach directly from Dubai.

We have over 280 destinations served directly from Dubai, so that gives us the ability to flow an enormous amount of traffic.

Another advantage of Dubai is that we operate 24/7. There are very few airports of our size and scale that operate round the clock. Plus, due to the large number of A380s and B777s that service DXB, we probably have the largest average throughput of passengers per movement at the airport, roughly between 203 and 208. So we get maximum efficiency from the hub.

We believe we have the most convenient schedule and the best commercial offer because of our location, our 24/7 availability, the nature of the traffic, and our open skies policy.

In light of the worsening regional security situation, do you think this can hinder the future aviation growth in the country?

Global security is something we take very seriously. We always make sure that the measures we take here meet exacting international and national standards. The UAE is in a strong position and for many decades has enjoyed a stable government and an unwavering strategy that has built a strong international reputation.

Dubai is a very cosmopolitan city and makes an efficient hub for transiting travelers and an attractive destination for business or leisure.

Twenty years ago, 1.1 billion people traveled to foreign destinations for business or leisure; by 2013 that number had more than doubled and represented $1.1 trillion. In this context, and in view of Expo 2020, can you share some details about the Strategic Plan 2020 and the $32 billion expansion plan you are implementing?

The whole idea of mobility of course is one of our major interests in Dubai. Therefore the strategy for the sector is to put together every aspect of mobility into play. The government very sensibly recognizes that GDP growth is directly associated with and facilitated by the efficiency and the effective nature of its transportation infrastructure.

This approach gives us the ability to keep building and developing our airports. The initial design capacity for Dubai International was set at 90 million [passengers], but we have revised that target to try to get to the 100 million mark, if possible.

We expect to keep up the high growth rates. Projected passenger numbers for the end of the year should surpass 78 million. And I do also believe that, beyond the capacity of this airport, we have a fairly solid strategy for supporting ongoing growth.

We’ve already sanctioned an expansion of the existing passenger terminal building at Al Maktoum International at Dubai World Central (DWC), which will take us to probably about 26 million. So the projected capacity across both airports by 2020 will be approximately 126 million.

Beyond that we have concluded a design process, which describes how we believe traffic will develop beyond 2020 at DWC, and it has resulted in a $32 billion program to expand that airport to accommodate 120 million by the mid-2020s.

At that point we can expect Emirates to move their intercontinental hub from the existing airport, DXB, to the new airport at DWC.

There is a clear relationship between Expo and tourism. More than 25% of GDP growth over the next five years is attributable to tourism. Besides the obvious positive economic effects of Expo 2020, do you think that it can also represent a stress test for the aviation sector in the UAE?

While the boost in traffic will be welcomed, the reality is that visitors’ numbers for Expo 2020 won’t be a huge stress test for us. By then we’ll have capacity of 126 million passengers across both airports. With the target of 20 million visitors by 2020, I think we will be able to accommodate Expo’s needs without too many problems.

That said I expect that during Expo the proportion of visitors coming to Dubai versus connecting will rise. Obviously, during the Expo we want to make sure that everyone has positive experience.

We’ll be trying especially hard during the Expo to make sure that everyone has a very comfortable experience through the airports and experiences the hospitality and service for which Dubai is world-renowned.

One of the hot topics in the global aviation debate right now is the escalating row between the U.S. and Gulf airlines. I’d like to gather your point of view on this issue and the potential consequences for the aviation sector in both countries.

Well first of all, I don’t think it is escalating, I think it has peaked already and it is normalizing now. I am confident about this because we had three further U.S. airlines coming out to speak against the three initial airlines that said that there was a case to answer.

We don’t think there’s any evidence whatsoever to support the allegations being made by the U.S. airlines against Emirates here in Dubai. I really do not think it’s fueled by anything other than jealousy about our coordinated position, our efficiency, and our ability to deliver at a high standard for the consumer.

The quality of the products, the sound commercial offer, and the experience in the air and on the ground is so demonstrably better than the U.S. equivalents of Emirates and Dubai Airports.

I think that is the crux of the matter. In other words, they are realizing that structurally their aviation sector is not set up for success the way it is here.

DWC is a mega infrastructure that will be able handle up to 200 million people. Don’t you think that an average passenger can find it daunting to navigate all the terminals? In other words, is DWC going to be a people-friendly and smart infrastructure?

Absolutely! In fact, we have already made it quite clear that we have no intention of making the airport experience any less intimate than what we already offer.

What we are trying to do is not to build one mega airport but a series of small airports that are integrated into a single infrastructure design. The initial design consists of building six identical hubs, each with a 20-million passenger capacity.

The idea is to allocate the capacity in each of those hubs to minimize the walking distance and maximize passenger convenience. So, if you are stepping off a flight from Sydney and going on to London, the aircraft won’t be far from where you are.

In this way, all you will have to do is deplane, go to the central circulation point, and then get on the other airplane. Moreover, if you want to go from node to node we’ll have an underground rapid transit system to connect them.

We are trying to make that path as short as possible and to provide as many features and amenities as we can; everything on a scale which is large enough to feel spacious and luxurious but small enough not to create difficulties in finding the way or that daunting feeling that comes with scale.

DWC’s design is challenging the conventions of existing airports by making the spaces much more intimate and very compact.

In terms of sustainability, what are the initiatives that Dubai Airports is embracing in order to support the Dubai Integrated Energy Strategy?

We already have some elements of solar power generation in Concourse D, our new concourse at DXB, where much of the glass incorporated into its design is actually photovoltaic glass.

We are looking at sustainability as a strategic objective while planning the next phase of DWC; we want the airport to be a fully sustainable building.

One thing we have in the UAE is an abundance of sunshine, so we should profit from it. We are working to have most of our air-conditioning and lighting demand covered by sustainable sources.

We are also considering water saving systems such as recycling condensate water from air-conditioning systems and using it for irrigation.

In addition to your role as CEO of Dubai Airports, you are Chairman of the Royal College of Organists, and a very passionate musician. You once said, “I think there’s a great similarity in being a musician and leading a team in a large enterprise.” How important would you say your creative-thinking mindset as a musician has been in your professional career?

I think it’s incredibly important because one thing you learn as a trained musician is that harmony is created as the result of everyone playing the right notes at the right time with the right tone.

The result, if everyone is following the same musical score, can be remarkably beautiful. This is why I believe that when it comes to business if you can combine the different talents of your team, recognize the positive qualities in each of them, and you can get them working together in harmony, then the result can be equally beautiful.

We can get to a situation where we’re not just known for operating the largest airport in the world, but we are also providing the best customer service, the best experience, the best variety, and the best range of products.

From my perspective that is the aim, it is one of quantity and quality. An orchestra can produce a vast volume of sound but it’s not just about that; it is the beauty of the sounds that come from the orchestra that give it its quality.