Thirty years of vision and leadership

Interview - July 30, 2014
Having first come to power three decades ago, H.E. President Denis Sassou Nguesso gained his latest seven-year term after elections in July 2009. In an exclusive interview with United World, Congo-Brazzaville’s celebrated figurehead talks about the achievements of his longstanding tenure and his exciting plans for the future of the country 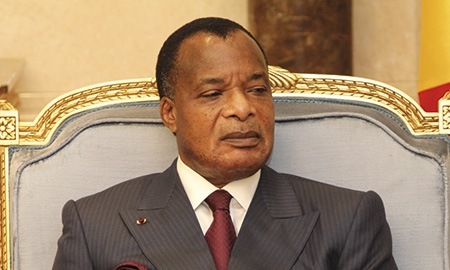 DENIS SASSOU NGUESSO, PRESIDENT OF THE REPUBLIC OF CONGO, WILL BE AMONG THE 50 AFRICAN HEADS OF STATE AT THE WHITE HOUSE IN AUGUST AT T
SHARE

H.E. DENIS SASSOU NGUESSO | PRESIDENT OF THE REPUBLIC OF CONGO
On August 4-6, President Barack Obama will host the first U.S.-Africa Leaders Summit in Washington. Fifty African chiefs of states have been invited. According to the White House, “discussions will center on how to encourage progress in key areas that Africans define as critical for the future of the continent: expanding trade and investment ties, engaging young African leaders, promoting inclusive sustainable development, expanding cooperation on peace and security, and gaining a better future for Africa’s next generation.

Do you think that Africa has become a more attractive destination for foreign investment than in the past?

Indeed, Africa is becoming an attractive destination and the age of pervading Afro-pessimism is now behind us. Today, it would be wrong not to believe in Africa. For the past 10 years, the continent has seen strong growth. The average rate was 5.3% in 2012 and 5.6% in 2013.

The primary resource of Africa is its young and dynamic population.

Africa is also a gift of nature, and there is huge potential in its subsoil.

It is also the region where humanity can find the best weapons in the fight against the causes of climate change and for a more rational management of the environment. Indeed, the continent has the second ecological lung of the world, after the Amazon region in Latin America: the Congo Basin, which is a World Heritage Site.

All observers agree that these exceptional assets contribute to make Africa the continent of the future.

That said, we as Africans are also very conscious of our limitations. Much remains to be done to ensure truly inclusive economic growth, one that creates jobs and leads to the eradication of poverty and misery.

The path to growth for development is long and fraught with difficulties, and Africa needs the support of all its partners, among them the United States of America, in order to continue on this path and achieve wellbeing for its people. The U.S.-Africa Summit has the merit of proclaiming this noble objective.

All topics of common interest are open for discussion at this historic meeting between Africa and the United States.

This is the meeting of two worlds, two civilizations who have shared a page of the history of humanity, namely the shameful trafficking that was the slave trade. But let’s not dwell on this painful issue.

Without anticipating the debates that will take place at the summit, among the topics that should be discussed are the need to boost economic relations between Africa and the United States; the question of peace, security, and stability in Africa; the fight against terrorism and maritime piracy; and climate change.

Other topics of interest are those related to multilateralism, and particularly the support that Africa needs to qualify for permanent member seats at the United Nations Security Council.

Congo’s economic growth in recent years has been remarkable. How did your country achieve so much in so little time?

In truth, the good situation of the Republic of Congo is the result of many sacrifices made by the Congolese people in order to restore peace, full liberties and democracy after a prolonged period of trouble which left painful memories. Sacrifices were made to organize the driving forces of the nation so that all Congolese citizens could get to work and help our country regain the trust of our partners. Sacrifices were made to ensure the recovery of our economy and public finances in order to foster growth.

We are today committed to rebuilding and modernizing our basic infrastructures, which are the pillars of development. Now is the time to diversify our economy, in particular through industrialization.

Congo plays a unique role in the region. What are the actions implemented by your government to promote bilateral relations with neighboring countries, and in what way does a strengthened and more united Africa benefit Congo?

The foreign policy of the Republic of Congo is based on the principles of peaceful coexistence, non-intervention in internal affairs and the promotion of sub-regional integration, particularly regarding neighboring states.

The Republic of Congo is convinced that the process of integration will save African states. No African state will find happiness in a balkanized, disunited Africa. This is why Congo, like other African countries, is working for a united, economically integrated Africa. It is a very long road, but all long journeys begin with a first step.

Following recent oil and gas exploration and discoveries, government revenues are expected to rise considerably. How will you ensure fair social growth?

Although the good prospects in the petroleum sector strengthen our confidence in the future, we remain cautious because oil is, as we all know, an unreliable resource.

This is why Congo, while it does benefit from oil, is working intensively on the diversification of the economy. We are putting everything in place in order to break our economic dependence on black gold. We have what it takes to do so.
Now, the key principle at the heart of the policy of the government is to ensure fair distribution of the fruits of economic growth.
To this end, major effort is being made to improve the performance of basic social sectors.

Furthermore, whenever the financial capacities of the state allow for it, one of the priorities of the government is to guarantee people’s purchasing power. However, in the social area, as in others, we are engaged in a long struggle.
The legitimate expectations of the population can only be met in proportion to the progress of the real economy.

On what areas do you focus your action and public spending?

One of our priorities at the moment is the development of basic infrastructure across the country because it is the basis for development. No country in the world has been able to grow without viable roads and airports, and sufficient energy supplies.
Also, in the information age it would be a delusion to try to develop a state without taking into account the new information and communication technologies. Those are our priorities at the moment.

In addition, we have engaged our country in an ambitious process of industrialization. This is one of the pillars of economic diversification, the others being the productive sector, solid mining, and eco-tourism.

In parallel, we are working to consolidate the rule of law, to promote democratic participation, social justice, and the wellbeing of the population.

What are your strategies and priorities for the future of your country?

The Congo of tomorrow will be mainly the result of what its worthy daughters and sons are forging today.

The ambitions for tomorrow’s Congo, oncex they are achieved, will give it added value on its journey towards emergence.

We firmly believe that no strategy for development and prosperity is justified if it does not match the deep aspirations of the people.

The ambitious project in which we have enrolled the driving forces of the country in recent years is precisely to take our people out of the trap of underdevelopment, poverty and misery.

This project deserves to be continued, strengthened, and achieved.

The All-Africa Games will be held in Congo in 2015, and your country will be in the spotlight. What strong points should people know about your country?

First of all, we would like to emphasize that the upcoming 2015 All-Africa Games in Brazzaville will take place 50 years after the first edition of these games, which were also held in Brazzaville. This is therefore a moment of great symbolic significance.

We would like to take this opportunity to renew our thanks to the African Union and African sports leaders for the confidence they have placed in the Republic of Congo by choosing it as the host country. The government and the Congolese people are working day and night to earn that trust.

Now to answer more precisely your question, next year in Brazzaville, Africa’s young athletes and distinguished guests will have the opportunity to see for themselves not only the sports facilities but also many other expressions of the Congolese talent, in many different fields.