Charged with the difficult task of keeping the Congo River and the river ports of Boma and Matadi accessible for ships carrying 80-90% of the DRC’s trade, Congolaise des Voies Maritimes (CVM) plays a key role in enabling the country’s international business deals to flow smoothly. CVM’s CEO Yengo ki Ngimbi explains the effort it takes and the company’s flourishing partnership with Belgium’s Dredging International. 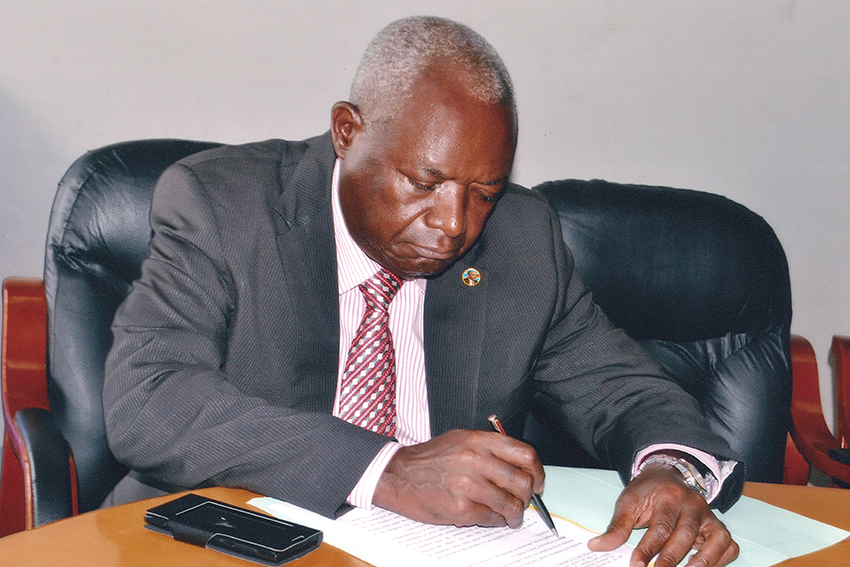 Infrastructure and transport are among the highest priorities of the government for the coming years, and major projects are being carried out with the aim of making transport a real motor of economic development. What role does Congolaise des Voies Maritimes (CVM) play?

Congolaise des Voies Maritimes is a commercial services company, and the DRC government is the sole shareholder. This company’s main mission is to ensure the opening of the Congolese economy to international trade through the maintenance and development of the Congo River between the city of Matadi and its mouth, thereby ensuring the best navigation conditions for vessels serving the ports of Boma and Matadi. It is a long, 150km journey, with the first 60km section extending upstream from Matadi to Boma, followed by 90km from Boma to Banana, to the mouth that flows into the Atlantic Ocean.

This maritime reach has several unique characteristics that cannot be found anywhere else in Africa. Both Congolese seaports, the ports of Boma and Matadi, are inland ports, unlike other African ports that are located on the coast. The other feature is that you cannot easily reach the port of Boma without crossing a difficult area to navigate, known as “la région divagante” – an unstable region that has a maximum length of 60km. In its natural state, this area is only four to five meters deep, while larger ships that frequent the maritime reach have draughts beyond 5 meters (6, 7, 9 or even 10 meters).

Therefore, CVM works as a mender. It has to dredge that unstable region to allow seafaring vessels to gain access to the ports of Boma and Matadi. And to do this, dredgers are needed to remove the sand.

It is a small company but of great importance. If we did not do this work and if ships could not reach the ports of Boma and Matadi, there would surely be a negative impact on the activities of other companies such as the Transport and Port Company (SCTP), one of the major players in the transport sector, the Congolese Office of Control (OCC), and the Directorate General of Customs and Excise Tax (DGDA), as well as the Maritime Freight Management Office (OGEFREM). All these companies would not have much to do. We must do our work upstream, so that these state-owned companies and other players have work to do. Otherwise, the Congolese economy would suffer severely.

It should be noted that 80-90% of the trade in the country, both in terms of imports and exports, travels along this section of the river, from Matadi to the river mouth. This is the route where trade between the outside world and the Democratic Republic of Congo is done.

Ensuring proper navigation in the maritime reach of the DRC, the CVM’s role is essential for trade and for the socio-economic development of the country. What can you tell us about these important projects that the sector is currently handling, both in the maritime and inland waterway sectors, like the Kasumbalesa project or the deep-water port of Banana?

Under the leadership of the Head of State, Joseph Kabila Kabange, supported by the Prime Minister, many things are changing. The deep-water port project, which will be implemented near the city of Banana, is very important, as are the various projects of the SCTP – the modernization of rail transport and the port of Matadi. In our case, certain measures were taken by the government to put in place a public-private partnership (PPP) between the Belgian company Dredging International and CVM. In view of the difficulties that our country faces, the Prime Minister had the idea of using PPPs to develop projects, thus the partnership between our company and Dredging International was born.

This is a PPP that offers several advantages, including the possibility to initiate financing for the purchase of a new dredger, the opportunity to train our technicians and ensure the continuity of staff, and the possibility of allowing large ships access to the ports of Boma and Matadi by additional dredging.

Our partner Dredging International, which has powerful tools at its disposal, is able to offer us a draft of 30 feet. By reaching this draft of 30 feet, large ships are able to enter the maritime reach safely, increasing trade and providing many benefits for companies in the transport sector. Thanks to this draught, transshipment operated by some vessels at the competing port of Pointe-Noire is avoided.

The advantage of Pointe-Noire (Republic of Congo) port is that it is more accessible to boats (located only 5km from the Atlantic Ocean) contrary to us who have to dredge the river daily.

It is not easy to be the DRC. Our leaders must be very tough, real fighters, who rack their brains every day to face up to these challenges. The President is fortunate to have this Prime Minister. I had the chance at times to accompany him on some of his missions abroad. In the West, they consider him as a being part of a new generation of Congolese leaders.

I would like to talk about the new CVM as a symbol of the Congolese maritime sector, and its role in commercial transport. What would you like to highlight for an international audience?

My answer will be in two parts. First, we in the transport sector are lucky to have a line of hierarchy. At the top you have the Head of State, then the Prime Minister, and below that CVM, which constitutes a solid foundation. If it were only one line, it would fail miserably. You have on the one hand the Minister of Transport and Communication Channels, and on the other the Minister of the Public Portfolio. We are very lucky at the CVM to have these two great fighters on our team.

Both the Minister of Transport and the Minister of Portfolio are hard workers; as soon as they engage a dossier, it will succeed. It is not only the case for CVM; the other companies of the transport sector will say the same thing.

Regarding the second part: the hierarchy knows what it is doing. No one can ignore the importance of trade. We walk in the footsteps of the hierarchy because we understand that we cannot develop our country’s commercial sector without, at our level, doing our utmost to achieve this result. And I must say that our company currently has, besides the different opportunities that the PPP will offer, very old production tools experiencing frequent and recurrent breakdowns. Since we started working, we have been striving to ensure, with these old tools, a permanent dredging of the maritime reach of the Congo River. And let me tell you that it is not always easy.

To achieve a permanent dredging, we must have fuel at all times. And I must say that since our team has been here, we have fuel at all times, we have lubricants at all times and we have what we need at all times. Since the work is done in shifts of a week at a time, a team goes down to the river for a week and goes back to be relayed by another. We are doing our best, even if there is not enough money, to have spare parts in stock, so that as soon as a part is required to repair a floating unit, we will receive it. We hope that those above us can see the efforts that we are making, because despite all these difficulties, the company continues operating.

It is our role and duty to support the government’s vision. Tomorrow, our role will improve through the PPP, because we will have many resources thanks to this initiative taken by the Prime Minister and which has been very supported by our two Ministers, the Minister of Portfolio and the Minister of Transport and Communication Channels.

What is your strategy to meet the challenges regarding the training of human capital, especially in such a technical sector?

I would like to reply by explaining the difficulties that we have inherited. We had the bad luck – mainly myself – of having inherited an overstaffed workforce. That is to say: those who preceded us hired staff left, right and center. When we began working at this company, the government noted that there had been disorder in this respect, and so it has been taking appropriate measures for the past four years. In the meantime, people get older and pass away. But we cannot ensure succession as it is forbidden to take on any new staff. Most technicians of the past are no longer here: they either died or retired without being replaced. There has been no transfer of knowledge or technical know-how recently. That is the great fear we have.

And to provide a solution, the PPP has arrived. This partnership will train part of the staff.

We request that the government of the DRC consider us responsible, allowing us to take on a minimum number of new staff in the most sensitive area of the company, thus avoiding a worse scenario tomorrow. It would also be important to allow us to hire some young technicians to guarantee continuity.

What is the legacy you would like to leave to future generations working at CVM?

A successful company, fully playing its role participating in the Congolese economy.