PROVISIONAL PRESIDENT OF THE SENATE
OTHERSAMERICASARGENTINAGOVERNMENTSENATE

Confidence & collaborations to open up a world of opportunities

The incoming Macri administration overtaking Argentina’s executive power has been historic: Argentine economic policy has turned 180 degrees favoring open markets and reintegration with the global political and financial community. Many observers remained skeptical however, of the Macri administration’s ability to govern, hampered mostly by holding a minority coalition in both houses of Congress. The year 2016, however, proved them wrong. The major reforms of the Macri administration – such as the agreement with the holdout creditors and the public-private partnership law – were finally approved with multi-partisan support. We discuss with Federico Pinedo how the Macri coalition achieves consensus to advance its agenda with the opposition’s support. 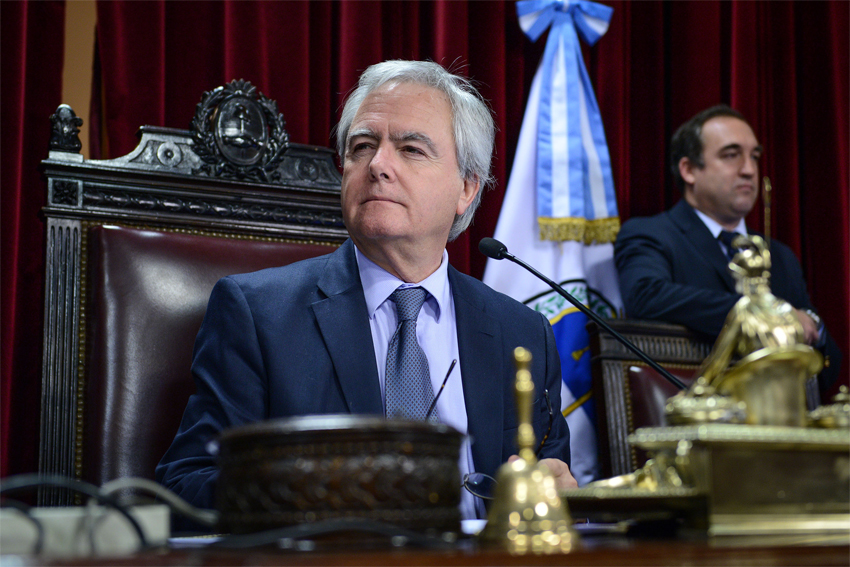 Argentina is making a political return to the global community. The country has relaunched relations with Mercosur and the US, and moved closer to the Pacific Alliance. In the first nine months since this new government took office, what are the primary indicators from Argentina’s new partnerships of this new political orientation?

We are in quite a special moment for South America, with two important countries in turmoil: Venezuela and Brazil. This requires a more important presence from Argentina in the region, as a stabilizer, and for us to cooperate with the defense of human rights and to strengthen democracy for the entire region.

This general situation opens an opportunity for Argentina. However, our country does not seek hegemony, simply to influence and cooperate in two main areas: democracy and human rights. Additionally, we need to work together with other countries to create opportunities for our people, which means boosting productivity and stronger relationships built on commerce and investment. This is the main reason President Macri is working for unity between Mercosur and the Pacific Alliance.

In this context, Argentina has decided to go forward in strengthening a rule of law, regarding it as the bedrock to then build both our foreign and domestic policy.

You sit on the Committee for Foreign Relations within the Senate. What is the sentiment in the Committee on Argentina's role in regional alliances and economic connections with the rest of the world?

We have had a strong debate regarding the economic measures that the government took at the beginning of the Macri Administration. We had quite a discussion about solving the debt problem that Argentina used to face, and the President made several economic decisions early in his term, such as the unification of the exchange rate and the lifting of all kinds of trade restrictions—not only taxes but also prohibitions and delays in the approval of imports and exports—and solving the foreign debt issue. We have also passed a law allowing Argentines with non-declared assets abroad to declare them before the tax authorities in Argentina. This, we hope, will bring a strong inflow that will finance the development in the coming years.

The President has also taken other, more difficult measures, such as the rate hike in public utilities, and the fight to curb inflation has been arduous.

We have made significant inroads in our reforms after a very difficult year. Initially, the opposition was convinced, but we have shown them and the world that we have been working professionally towards obtaining the results we said we were going to pursue. Confidence in our management is stronger than ever before.

How did you accomplish this vote of confidence? Your Cambiemos party is in the minority in both the Senate and the Chamber of Deputies. The executive branch’s initiatives must be approved by the legislative to get laws and reforms passed. How have you been able to build consensus among the opposition?

Argentina's problems were evident, practically undeniable. We inherited a situation with a 30% poverty rate, 30% inflation, and 9% unemployment. The dire situation gave President Macri political leeway in his first months of his administration in order to take his own measures. The quick action brought confidence.

The Cambiemos ticket and the Republican Proposal party have been accustomed to compromising in order to get bills passed, through experience of being the party in opposition. Even when Mauricio Macri was mayor of Buenos Aires, he did not always have a majority in the City Legislature. Would you say that the experience of doing politics that way was what prepared the party for consensus building, now that you are in power in the National Government?

The potential of the Argentine economy is clear: the natural resources, the educated professionals, and the broad industrial base, but without a clear mechanism for investment, the country lacks the conditions for stable growth. How does Argentina work to create a stable rule of law?

Our government will not abuse power because we believe in institutions, and we believe in the long run rather than short-term, partisan benefits. We respect other positions and we will continue to do so.

On the other hand, the main political party in Argentina has been Peronism for a long time. Some people in the left wing of the political system thought that Peronism would transform into a small party of extremists trying to throw stones at the government. In my view, Peronism is one basic structure of the democratic system in Argentina, and mainstream Peronism is comprised of responsible people. Most of them are governors in the provinces and mayors in the cities, and some are labor union leaders that belong to productive sectors and they know how to support their industries and keep the number of jobs, which is what makes the main bloc of Peronism also a constructive one. This part of Peronism has supported the government and its main decisions, even from a standpoint of opposition.

As Argentina betters itself, instead of speaking about how to demolish or attack someone, we will be able to talk about how to create new opportunities for people to have work in Argentina and to develop. I am confident in this possibility through the daily efforts of my team. When you have a strong opposition, you need to create confidence in your administration. No one will collaborate if they do not build confidence between the parties. We have created confidence and we are working on collaboration and not on conflict.

How can Argentina export this domestic confidence that you mention and create an international sense of confidence?

Argentina aims to be responsible and constructive in its foreign policy. We will help other countries in the region such as Brazil and we will try to build bridges between Mercosur and the Pacific Alliance. We will support the aspirations for democracy and human rights in Venezuela, and we will have a proactive refugee policy, by welcoming Syrians to our country. We will be constructive in the global warming issue and to encourage investments in Argentina in order to provide goods and services to the region—this is a good opportunity that we have now.

We have eliminated the idea of having foreign enemies in order to obtain political advantage within the country. Argentina holds fruitful relationships with its partners, which include the US, the UK, and Europe. The Foreign Minister of the European Union, Federica Mogherini, told me that Argentina was one of the few pieces of good news in the world. We are constructive, serious, responsible, professional and predictable.

You mentioned focusing in long-term projects, but you also have elections in one year. How are you going to convince the world and indeed Argentine voters themselves about the advances of your government in just a short time since you took office?

In this first year of our term, the GDP of Argentina has not risen, as it has failed to do so for the past five years, while suffering at a 35%-40% inflation rate. Next year we’re aiming for 15% inflation and 3.5-4% annual GDP growth. This will be a strong base with which to go into an election.

What is your message to the US policy-making community in Washington?

Many in the US political arena know that it is better to build a relationship with moderates rather than radicals. Extreme positions can drive people to a conflict, which is not the basis for increasing prosperity and peaceful cooperation. One must work in the center of the democratic system, and to work for the country rather than against other politicians. This has been my experience in Argentina, at least.

We come from a very confrontational political system in which people who belonged to opposing parties were enemies. Today, however, we attempt to find common ground to build consensus in the interest of national development.

Such a change in dialogue does not happen on its own; it depends on the leaders who establish that dialogue, such as you, the Provisional President of the Senate. You are respected on both sides, even by some of the staunch Kirchnerites. How have you been able to assert your role as a unifier while also promoting to your party's ideals?

I hate clichés. I would hate to be one of those politicians with completely predictable oration. I prefer to think and make a position of my own without following any books. That allows me to be more empathetic with those in the opposition to ascertain the basis of their conviction. If I find they have something valuable, I just say so. Probably because of this, some people in the opposition speak well about me. I have been quite a strong opposition leader against the previous government, but I have always been respectful.

I work for President Macri and I work for change in Argentina, so I focus on that. I will continue trying to convince our people and the people in the opposition that different steps to be taken are important for Argentina to take advantage of. If we lose our energy fighting over the small things, we are going to miss the opportunity to build something big.

What is your particular role when it comes to seizing this opportunity for Argentina?

We need to create an environment that allows Argentina to receive a large amount of investment. Argentina has the second largest reserve of shale oil and gas in the world. We need approximately $30 billion in order to develop these reserves.

We also need to build a huge infrastructure of roads, highways, ports and railways as well. We need to lower the prices and logistics costs in the country in order to make Argentina competitive. All these are great opportunities for investors. We can put both interests together: that of Argentina to develop and that of investors to do good business.