Kuwait has long standing relations with Latin America and Mexico is one of five countries in the region with a resident Kuwaiti ambassador. Worldfolio speaks with Mexican Ambassador Miguel Ángel Isidro Rodríguez, who provides us with his view on growing relations between the two nations, his optimism for growth within the region, and the initiatives behind increasing commercial links with Kuwait. 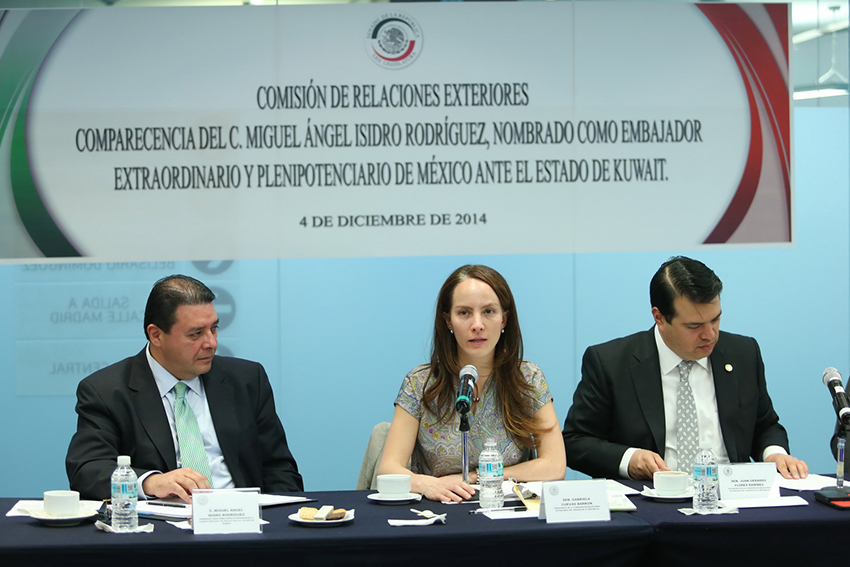 What is your opinion on the regional integration process of the GCC countries?

Mexico recognizes that the regional integration of the GCC countries is an important effort with the clear objective to unite the economies of the six GCC countries (Saudi Arabia, Bahrain, United Arab Emirates, Kuwait, Oman and Qatar), as well as to coordinate social and migratory policies, and also to create free trade areas, to organize growth and to align policies for trade, finance and tourism.

How would the international scene change if the Gulf Union is put into effect and it starts being considered a bloc instead of individual countries, such as the European Union?

Mexico is proud of the GCC’s progress since its creation in 1981, based on the cultural similarities and public policies of its members.

We observe and celebrate the strengthening of the interaction with other regional organizations, and of course we see in the GCC an organization with the capacity to play an active role in the main issues of the world agenda.

It’s important to remark on the positive contribution of the countries of the region to the discussion and financing of matters of international interest such as global warming and the promotion of renewable energies.

What optimism is there about the future of the region and its current status in terms of potential for growth?

During the Arab Spring, the GCC region was the most peaceful, and Kuwait in particular played an important role as a natural mediator between the parties of the conflict, and they asked repeatedly for human rights to be enforced.

Kuwait also actively promoted the priority of sovereignty for the parties’ internal affairs.

The region has challenges and it’s clear that in order to consolidate the presence of Mexico, new spaces for political discussion and cooperation must be opened, as well as promoting visits between governmental and private sector parties, and civil society organizations.

The GCC countries are experiencing sustained growth rates and they are an important direct foreign investment source all over the world.

They maintain a dynamism that results in the identification of markets that provide incentives for investments.

These countries, including Kuwait, have become a regional platform for logistics in terms of trade and transport that must be exploited to benefit bilateral relations between Mexico and Kuwait.

Currently there is a renewed interest in the region, as political, economic and strategic interests merge and they become a window of opportunity for different parties.

What role does Kuwait play in the region?

Kuwait has close relations with the GCC countries, with which it works jointly in the regional integration project.

For years, Kuwait has been developing a policy of progressive normalization of relations with Iran, within the framework of the United Nations resolutions, which has allowed the reopening of embassies and the recent exchange of high-level visits.

Moreover, during recent years, Kuwait has reinforced its relations with Latin American countries and currently has embassies in Mexico, Argentina, Brazil, Chile, Cuba and Venezuela.

As an indication of its opening to other religions and the values of tolerance, the Apostolic Nunciature, with offices in Kuwait, is the resident embassy of the Vatican that covers all the GCC countries.

What do you think of the current stabilization and peace promotion efforts made by Kuwait and the Gulf?

The recent celebration in Kuwait of the 42nd meeting of the Council of Foreign Ministers of the Organization for Islamic Cooperation, under the aegis of His Highness the Amir Sheikh Sabah Al-Ahmad Al-Jaber Al-Sabah, remarked upon the recognition of the UN to the Amir as a “humanitarian leader” and the State of Kuwait as a “humanitarian center”.

Mexico appreciates the leadership of His Highness in fighting dissemination of jihadist organizations and his diligence counteracting the sectarian tensions that impact and divide the Islamic countries.

What is the perception of the current reputation of Kuwait and of Arab countries in general in Latin America?

Kuwait has long-standing relations with Latin America and vice versa, with Mexico being one of the five countries in the region with a resident Kuwaiti ambassador.

Today, Kuwait is the largest foreign investor in the GCC region and hosts pacification meetings and international humanitarian conferences, such as the Kuwait I, II, and III meetings, which have considerably relieved the suffering of the Syrian civilian population displaced by internal wars.

How do you see Kuwait’s humanitarian role in the world after the recognition by the United Nations?

The Secretary-General of the United Nations, Ban Ki-moon, named Kuwait’s Amir Sheikh Sabah Al-Ahmed Al- Jaber Al-Sabah, as a “humanitarian leader” on September 9th 2014, and he also named the State of Kuwait as an “international humanitarian center”.

The will of the highest world organization to thank Kuwait for its constructive role and cooperation within nations undoubtedly raises Kuwait’s profile.

Both titles were given as recognition of the work, contribution, solidarity and permanent support of Kuwait in the humanitarian field worldwide.

Which are the main cooperation relations between Kuwait and Latin America?

The Kuwait Fund for Arab Economic Development, as well as other parts of Kuwait’s government, have shown interest in collaborating with Mexico on joint projects in the Caribbean, Central America and the Pacific.

Moreover, Kuwait is interested in participating as an observer in the Pacific Alliance.

What reasons led to Mexico’s decision to open an embassy in Kuwait?

The Mexican Embassy in Kuwait was opened in March 2012. It is a project that had been developed as of the establishment of diplomatic relations in June 1975.

Finally, both countries agreed to open embassies in each other’s capitals.

The main objective of the embassy is to consolidate political relations and to develop the economic and commercial potential of bilateral relations, from infrastructure and service projects to increasing economic exchanges with Kuwait, one of the countries with the highest GDP per capita in the world.

Other important objectives are to conduct Mexico’s foreign policy through dialogue, cooperation, promotion of the country, and tending to the Mexican community in Kuwait.

Mexico is interested in having a real presence in this strategic Gulf country.

How important to Mexico are its relations with Kuwait?

As of then, we have maintained relations of friendship and support. Currently, we are working to strengthen our political dialogue and promote our commercial and investment exchanges through different specific actions.

During the visit, many productive meetings were held with the Kuwait Investment Authority (KIA) and the Kuwait Chamber of Commerce and Industry.

These exchanges are fundamental for the promotion of the trust and understanding necessary to generate commercial initiatives and produce investments.

The embassy encourages Mexican businessmen to develop close bonds with their Kuwaiti counterparts.

Bilateral exchanges and cooperation can become a catalyst for trade, dialogue and understanding between our countries.

On Kuwait’s part, we can highlight two visits the then Prime Minister His Highness Sheikh Nasser Al-Mohammed Al-Ahmed Al-Sabah made to Mexico during July and September 2010.

The first time was to promote the opening of resident embassies with the announcement of the opening of the Kuwait Embassy in Mexico City, and the second one, to participate in the bicentennial of Mexico’s independence.

What are the main promotional initiatives of the embassy to strengthen the commercial links with Kuwait?

In February 2013 México and Kuwait signed an Agreement for the Reciprocal Promotion and Protection of Investments to strengthen the legal-financial structure of bilateral relations, positioning Mexico as a safe and strategic destination that attracts investments.

Using this agreement and the many free trade treaties – which give privileged access to markets of 45 countries, as well as other key variables such as legal security for investments, human resources and infrastructure – signed by Mexico as a platform, many mutually beneficial trade and investment projects can be promoted.

In the areas of tourism and commercial-economic promotion, the embassy invites representatives of Kuwaiti travel agencies to participate regularly in the Acapulco Tourist Tianguis.

The most recent Tianguis took place in late March 2015.

Are there any joint projects being prepared at the moment? Which are they?

The following are the scheduled events for 2015:

·         Preparation of investment projects to attract Kuwaiti capital to Mexico.

·         Identification of cooperation projects in the fields of energy, healthcare, education, science and technology, and in those sectors which interest Kuwait’s government.

What are the most significant elements in the agenda of the Embassy for the promotion and development of these relations in the future?

The recent energy reform in Mexico is an important step towards the modernization of the Mexican energy sector.

With this reform, it’s possible to attract the necessary investments and technologies to generate more competitiveness, new markets and an increase in the production of hydrocarbons.

It also allows competitiveness in the electrical power sector and builds the foundations for wholesale markets.

Lastly, it provides incentives to accelerate the transition towards cleaner energy sources.

We see great potential for Kuwaiti companies wishing to enter the Mexican energy sector, which has become more competitive and promising.

We also see opportunities for Mexican companies looking for best practices in a field where Kuwait excels.

A memorandum of understanding recently signed by state-run Pemex of Mexico and KUFPEC will play a decisive role in this sense and will facilitate our exchanges.

With a privileged geographic location with access to North America and Latin America, Mexico is shaping up as one of the most dynamic economies in the region and a reliable business partner.

We await with interest to receive investments from Kuwait for different development and infrastructure projects.

An emblematic project in the years to come is the construction of a new international airport for Mexico City, which will increase current capacity four-fold.

Another area of opportunity is the tourism industry, especially the development of high-end resorts throughout the 11,000km of Mexican coastline on the Gulf of Mexico and the Caribbean Sea, and on the Pacific Ocean and the Gulf of California.

Mexico and Kuwait may also join forces to channel regional investments. For example, Mexico plays a key role in the promotion of many infrastructure projects in Central America and in the Caribbean, and could facilitate Kuwait’s participation in the development of the region.

Cooperation with the Kuwait Fund for Arab Economic Development (KFAED) presents interesting business opportunities in this regard.