‘We are about engagement, setting up memories so the guests will come back’

Interview - July 17, 2014
The Al Bustan Palace (a Ritz Carlton-run hotel) is set in one of Oman’s most serene oceanfront location, with a beautiful sandy beach running for one kilometre. This palatial hotel is an “example of His Majesty (Sultan Qaboos’) vision”, says Bernard N. Viola, General Manager of Al Bustan Palace. “(There are) details that he himself created. He came down before the opening and put his personal touches on the landscaping, building details, atmosphere, and classical music in the lobby.” In this interview, Mr Viola also shares his views on turning Oman’s nascent tourism sector into a more established one, and how Al Bustan Palace serves as a symbol of Omani’s renowned hospitality. 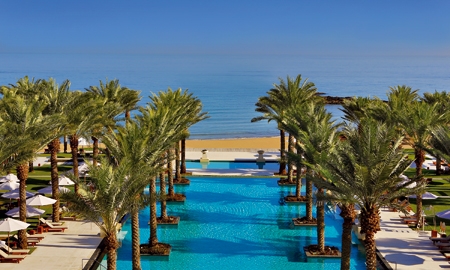 BERNARD N. VIOLA | GENERAL MANAGER OF AL BUSTAN PALACE
In your professional view, what has been the recipe for success here in Oman?

I didn't come up with the phrase but it is appropriate: "Beauty has an address." When you look at some of the other countries in the region who are tangled up in some political issues, you can see that Oman is truly blessed to have such a good leader in the first place. There are also leaders under him and His Majesty has picked the right people. For us, in the tourism sector, it has been well managed by the ministry of tourism and the deputy minister.
The bottom line is that the new team in the office has been very assertive, a lot of travel to promote Oman, the whole cabinet has been strong to realize the potential of this country, the road shows they do, opening offices in other countries, especially in Asia. Now they are looking at the United States very carefully—the amenities in the country, new alliances with companies— there is a lot of potential. The successes ahead from a commercial point of view are limitless.

2013 was meant a watershed year for Oman tourism, investment and promotion.

I'm glad people are waking up. There has to be a different venue to create wealth and growth since the oil and gas will eventually be gone. You look at the beauty of the people, the beauty of the land—Oman is very unique, and it is not just a land of sand, mountains, etc. From a landscape point of view, Oman is special and it makes for a sustainable destination for tourism. I have been to Hawaii, California, the mountains, the canyons—I don't know why a helicopter company doesn’t settle here in Oman and take people on tours of the gorges, drop them one day overnight and pick them up the next morning. We need more amenities here to really take advantage of what is available in Oman. People will get tired of going to Dubai—the traffic, noise, the size— you are just a dollar there. People won't escape from New York, Tokyo, and Hong Kong and come to Dubai for the same thing. Here in Oman, the beauty is here, but the word is not out yet. With the new airport, it will change, as the gateway to the country.

Al Bustan Palace, a Ritz Carlton Hotel, has received a plethora of accolades lately, the Best Business Hotel in Oman. What does this mean for Oman?

I think it means a lot for people. The Palace is the symbol of hospitality in Oman, an iconic place in the Middle East, now branding with Ritz Carlton. So you can't separate these two brands without His Majesty, they are an extension of him and his vision. At the end of the day, we are about engagement, setting up memories so the guests will come back. It is up to the staff to achieve this, it is their hotel at the end of the day, and they are the ones running the hotel, not me.

So from your personal perspective about the hotel's success, is it the people or the place?

I think it is a combination of things. One, it is the Palace; it set the standard for the region back in 1985, established early in the renaissance, for the first GCC conference. Situated in the best location—the most serene location—with one kilometre of oceanfront beach. And it was another example of His Majesty’s vision, details that he himself created. He came down before the opening and put his personal touches on the landscaping, building details, atmosphere, classical music in the lobby, etc. Even the frankincense burning, it makes the lobby very impactful.

Can you briefly elaborate on the history of the hotel?

It goes back to the vision of His Majesty wanting a place to bring all the kings together, that's why the palace was built. It opened on time, with 4000 employees, for the first GCC conference. When you think about the vision that has been carried, it is still special from the early days when some people I know were here with very few guests but we were all dressed in suits and formals dresses for the ladies, and though those times have changed the palace still gives that sense of class and elegance.

There are many conferences being held here. What else can be done to expand Oman's attraction as a business destination?

As we discussed, what will propel the expansion is the new airport. It is the key to open the gateways from the United States, Asia, and South America etc. with direct flights. You see all the major cities in the United States and imagine having direct flights from these places to Oman? But now, people don't know Oman. Ultimately it’s more marketing, road shows, maybe twice a year, keeping Oman up front and in people's minds.Can you talk about Omanization and what it means for the hotel?

I think that the hospitality sector has a different meaning for the Omanis. We are on the verge of opening a new industry for the Omani worker. Hospitality is in the blood that's for sure; the education part relies on the industry. We must educate; the sense of urgency needs to be there for service, to be at the forefront of the thought process. The next scenario is to develop an awareness about hospitality. These great schools, GUTech, Oman Tourism College, are starting to groom the next generations but the pipeline of people is not yet full. For 3000-room nights, where are the people? And the job is 24 hours; you will miss holidays, your friends, and family not like a job with the government. So, this is where we are today. How it will be passed on to the next generation is the big obstacle we have. But it is a good problem; there are the seeds in place. How do we truly pass on the attitude about work and commitment and ethics for work – to earn the things you want like cars, phones etc. His Majesty has this idea and he tells the people "you have to work”. There are some great people already in the business.

Oman is a key ally for the United States: the road shows, agreements, and now with the Free Trade Agreement in place, now is the time. In terms of the hospitality sector, what are your thoughts on the American involvement in the tourism sector?

I think personally, knowing the close ties between the US and Oman and the work that the ambassador does here, things are good. But what I would do, the first step is to take some of the key young authorities in the industry, send them to international exchange programs, to the United States, to Europe, to the culinary academies, so they develop their skills. Then market the homes for these wealthy Americans to retire, single family homes, etc. by advertising great weather and beauty. There are opportunities for more great restaurants in Oman, perhaps an Omani type Disney Park with their own style.

Finally, as an international individual, what is your perception of Oman?

I think there is still some work to do to bring Oman to the world. You look at the people who come, mostly from the United Kingdom, followed by the Swiss and Germans, but then it drops way off. The airport will help but what about visas? You can't have tourism without airports and visas. Then you have to think about parking, shopping, roadways; there are many logistic issues that need to be solved immediately. It is an on-going problem and the sooner that people figure that out, and then the future is very bright here. Lastly, Oman is one of the friendliest places, the cleanest and most beautiful. I would say to Americans, come here now! It is even safer than cities in the United States—I feel much safer here. It is a little expensive but worth it for the mountains, oceans, and beaches. Why Al Bustan? Well we have over 200 rooms, open 24 hours, and the best beach in the world!