Motohiko Kato, the Japanese Ambassador to Brunei Darussalam, speaks about the longstanding commercial relations between the two countries, and why he is hopeful more ‘wonderful’ Japanese investments will come into Brunei 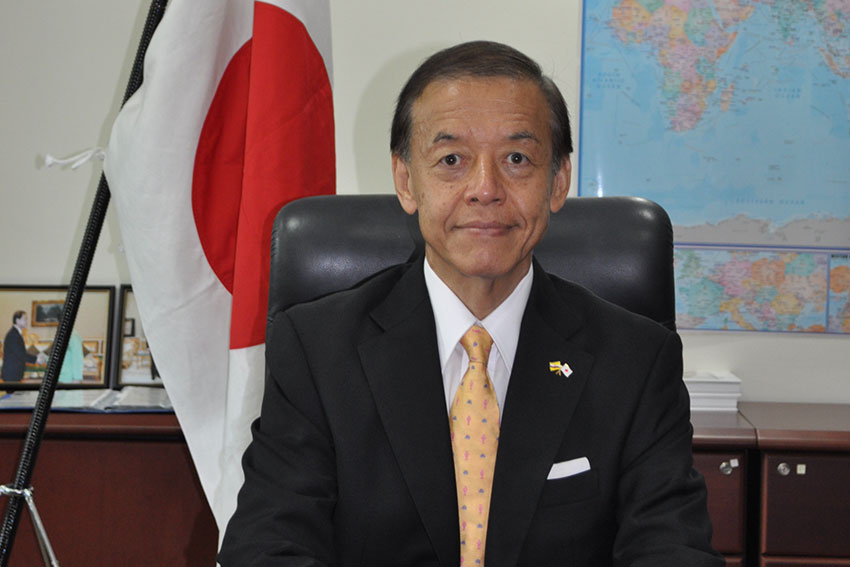 2016 marked a major milestone in the ASEAN regional economic integration agenda with the establishment of the ASEAN Economic Community, which opens huge potential for growth opportunities. According to the Japan Bank for International Cooperation, about 56% of Japanese firms intend to expand business in the ASEAN in the coming three years. Can you comment on the importance the ASEAN region is gaining for Japanese investors and how Japan looks forward to supporting the region’s economic integration?

Looking at investment figures. Then largest foreign investors in the ASEAN are the EU, with roughly 31%, followed by the United States 17%. Number three is Japan, with 15%.

The significance of the ASEAN for Japanese investors is increasing rapidly. In the past we invested heavily in China. But, as you know, the labour costs in China are increasing, coupled with uncertainties in that country. So Japanese companies, in my opinion, are now trying to strike a balance. So currently Japanese investment in China is declining, while in other countries like Indonesia, Thailand or Myanmar, it  is increasing.

Also after World War II, Japan provided a significant amount of economic support to ASEAN countries. Many of the ASEAN countries could achieve high economic growth or high economic development. Still we are providing our economic support with the soft loan on all the JICA assistance, the grant aid. We are also trying to help towards the region’s integration. We try to provide so-called high quality assistance. It’s not cheap assistance. Cheap assistance means lower quality. The assistance by Japan is really wonderful quality and lasts for a long, long time.

Japan and Brunei share a solid bilateral relations. The establishment of diplomatic relations started in 1984, more than 30 years ago. However prior to this, Brunei and Japan already enjoyed strong commercial relations, especially in the energy field. From a Japanese perspective, could you outline the bilateral ties between Japan and Brunei?

Secondly, the relations between Japan’s imperial family and the Brunei royal family are very, very close. When Brunei became an independent country in 1984, immediately Japan invited His Majesty as Japan’s state guest.

Also we have the JENESYS (Japan-East Asia Network of Exchange for Students and Youths) program. JENESYS is designed to establish a kind of networking within ASEAN countries and ASEAN and Japan, inviting the young people from a different area, and these people try to visit Japan and know more about their knowledge and techniques in their specialized area. Japan has been parenting a lot of that kind of youth exchange program.

In 2007 Japan and Brunei signed the Brunei-Japan Economic Partnership Agreement (EPA), which happened to be Brunei’s first bilateral free trade agreement. What is the balance of the trade agreement after 10 years? What areas have succeeded and where is there room for improvement?

Both countries need to do more. But due to the EPA, for example, the tariffs are almost removed. For example, Brunei produces wonderful shrimp, called the Blue Shrimp which is very delicious. So our tariff on shrimp is zero, so Brunei business people need to do more to penetrate the Japanese market. In the EPA, there are energy chapters which are very beneficial to both countries. Also there are investment chapters and chapters on national treatment – which call for no discrimination between Brunei people and Japanese people and no discrimination between local and foreign investors. So this will provide the basis of the Japanese investor to invest in this country.

In recent years Brunei Darussalam has suffered of a retraction in its economy, mainly due to international commodity prices. This has accelerated and intensified the government diversification efforts in moving away from oil and gas-related industries. How is japan supporting Brunei’s diversification efforts towards vision 2035?

Yeah, in the past oil was priced at more than $100 – happy days for Brunei and many, many countries. But the oil price has decreased sharply, and this country faces serious challenges. Now this country is struggling and the government budget is slashed. Therefore, I’m now meeting with many ministers. All of them have told me that they need Japanese investment. Japanese companies contribute to the diversification for the economy of this country. But now this country heavily depends on oil and natural gas.

How do you encourage investment into Brunei from the embassy?

The entry of biotechnology companies like MC Biotech, run by the Mitsubishi Corporation, is a wonderful step forward. I’m hopeful that success stories like this will attract more Japanese investment.

What is the uniqueness of Brunei as a investment destination when compared to other countries in the region?

Security is very important to Japanese business people. This country is quite safe and politically very stable. Everybody loves His Majesty. You have many tax incentives, low corporate tax and no personal income tax. You have access to free health care. People here speak very good English. And also local people are very friendly towards Japan. So that’s a very important point. Japanese investors try to know whether or not their investment is welcomed by the local people.

And also geographically, Brunei is the centre of the ASEAN area. A two-hour flight is enough to visit every major ASEAN city. It is also relatively close to Japan, for example, liquefied natural gas, only takes seven days to get to Japan.

We are trying to conclude an agreement with this country so that JICA people will be able to come here based on the expertise they try to contribute to the diversification of the economy of this country. Also Japan tries to invite young people for training. So then we try to contribute to the development of this economy. In doing so, I am hopeful there’s going to be a lot of new business opportunities or the Japanese investors. We are making efforts to conclude the agreement as soon as possible.

What do you think is the main challenge Japanese investors have when coming to Brunei?