‘An innovative political process under way’

Argentina’s Chief of the Cabinet of Ministers Marcos Peña discusses the work of the innovative and forward-thinking government of Mauricio Macri, which came to power in December 2015, promising to move the country away from the polarization and economic problems that have dogged national politics in recent years. 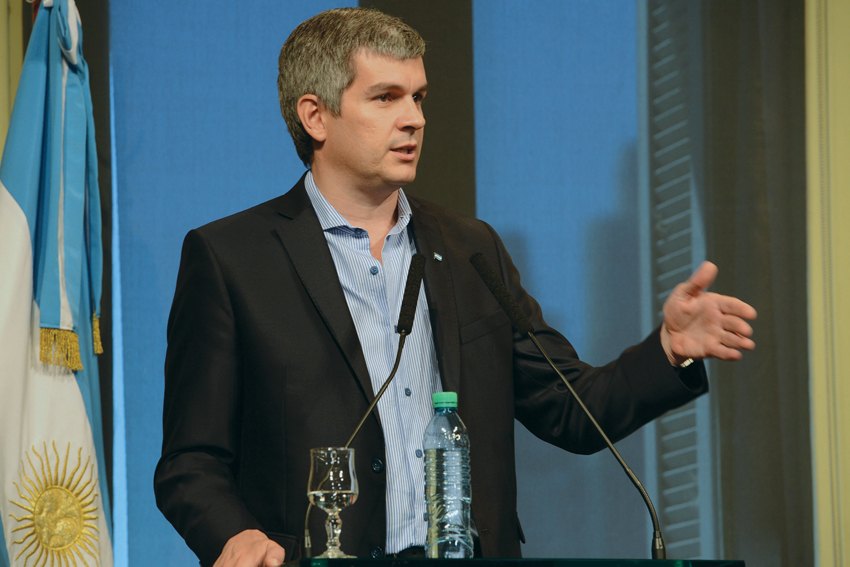 MARCOS PEÑA, CHIEF OF THE CABINET OF MINISTERS, ARGENTINA
SHARE

MARCOS PEÑA | CHIEF OF THE CABINET OF MINISTERS, ARGENTINA

Argentina’s economic potential is known worldwide, with its vast natural resources, educated workforce, and diversified economy. However, currently the nation lacks a stable governance track record and a clear mechanism for investment which has stood the test of time. Can you please describe the current administration’s efforts to boost international confidence to lure investment?

There is a political story, not only an economic story, to tell in regards to what is taking place in Argentina. The economic story is clearer to the world, as Argentina is an underinvested country that has considerable potential in every field possible.

There is an innovative political process under way. We are a young government, born out of the 21st century, which doesn’t come with the ties of the past. This is taking place in the context while many Western democracies are facing new challenges in light of the technological revolution and in the changes in the viewpoints of their citizens. What is happening in Argentina is a good story to tell to the world.

There have been very impressive reforms in the past 10 months, and they have been implemented quite promptly. However, what is the sustainability of your reforms once you leave power?

In the world we live in, no one can assure anything anymore; the countries that we thought had everything assured are now facing unexpected changes.

Nonetheless, we believe our process is sustainable because it has come from the bottom-up, by result: these changes have come from the society’s desire to change the way we want to be as a country. There has also been a generational change in society, as well as in leadership, which has come after a quite complicated period. We used to live in a country that did not represent what our values were as a society.

The combination of the uncertainty there is in the whole world at the moment with a strong bottom-up process—which represents a more globalized generation that looks to live in a more democratic country—is good for the sustainability of these changes.

Even though trust is a process and it needs to be built overtime, many companies such as Coca-Cola, IBM, Cargill and Mercedes-Benz have decided to make investments, despite Argentina’s history of instability. What does the Macri administration offer the companies that were already settled in Argentina, as well as those that want to come to the country for the first time?

We have a more forward-looking mentality to offer these companies, which can help them not only ‘survive’ but to thrive in a global context. We want Argentina to be part of a platform of investment, trade and innovation. These companies have stayed because our human and natural resources have great potential, and we offer the possibility of starting to fulfill that potential.

Your administration is working on making the sectors more competitive. What can companies gain in this new scheme of having competitive access to the market?

Each sector has its story. The Argentine agribusiness sector is one of the most competitive in the world, and the potential lies in lowering capital cost, generating more access to markets, improving infrastructure and technology. The government can help this sector increase what they are already producing and fulfill an important role in terms of food security. There are also smaller producers that need help in terms of branding, change of mentality, capacitation, use of technology; we are also helping them.

What is more important is that every sector can count on a state that will not abandon them by opening the economy overnight or allowing job destruction. But at the same time, this is a pragmatic state in terms of helping the different sectors gain access to the world. We have a global mentality.

Argentina is a small-business economy, with 90% of the businesses being SMEs. However, only 1.5% of them export. How do you help SMEs gain access to international markets—both in foreign countries and by inserting themselves in the value chain?

Firstly, there is the absolute need of this global view, which many governments in the past have lacked. The notion of being integrated to the world in terms of investment, trade, technology and ideas has to be reinforced by every area in the state. There is not a single area that can work in this, it is the whole state working in this sense: from early education to infrastructure, to regulation, justice and congress. Everyone has to work together when it comes to changing the mentality towards a global view.

Your Cambiemos political coalition does not have a majority in Congress. How are you working with the political opposition in order to obtain the necessary consensus to make these changes you mentioned?

This has been one of the most productive years of Congress. Not only do we not have majority, but no party does. We have worked on the idea of working together towards a forward-looking agenda from the very first day.

We also value the role of Congress, as almost every law we have passed has been modified by Congress. We have also passed laws that have come from Congress. We are not in the government to prove we are right, we are here to get the job done, which entails a pragmatic and open agenda that works in terms of alignment rather than in terms of agreement. We merely state the path we want to follow and we then try to build agreements on that structure. We also have a pragmatic view on the way we tackle problems.

Some of your market-oriented reforms were not championed by the previous government. How have you been able to implement the ‘alignment over agreement’ policy in cases like this?

Most of Congress does agree with this agenda. Political parties in Argentina have historically lacked a highly ideological agenda—and even more so since the 2001 crisis. The same Peronist party made the market reforms of the 90s and closed the economy in the last decade, for example.

The idea of alignment is more flexible than closed agreements. It is merely stating the path we want to follow. Most governors today agree that we need better relations with the world, better institutions and more democratic processes. You might have differences in the details, but at least we all agree on where we are going.

Would you say that having been a party that was in the opposition most of the time has helped you shape this mindset?

We were always a minority in the Buenos Aires city legislature, and we still succeeded in implementing many reforms. We are used to this way of governing and we actually like it, we believe it is good in order to keep you flexible and open to dialogue, which is a characteristic of the 21st century. The idea of a government that wants to implements its own agenda regardless of what the people think and demand is becoming more and more obsolete.

‘Zero Poverty’ was one of your campaign slogans and is now the first of the three pillars of your government; the idea is to create more and better jobs, which we know is a long-term goal. However, in a difficult context, people are demanding to start seeing some of the effects of the investments companies have pledged they will make.

‘Zero Poverty’ was more an invitation to a common agenda than a promise. Argentina does not have a structural reason for the large poverty figures we have. Our main contribution during the first year of government was to avoid a crisis. When we first took office, the numbers were the perfect storm for one of the big economic crises Argentina has every 10 years.

Our second contribution was to lay the basis of growth. We have already seen inflation decelerating, public investment is beginning to recover, credit has started to grow this past month and in the next six months we will see a recovery of consumer capacity, which will help us reach the next stage of these reforms: how to create jobs and reduce poverty.

We also have a very aggressive agenda in terms of public investment: water, housing, sewage system, schools, hospitals, and public infrastructure. Basically, how Argentines live, not only how high their income is.