The company that 'Mexicanized' the nation's infrastructure 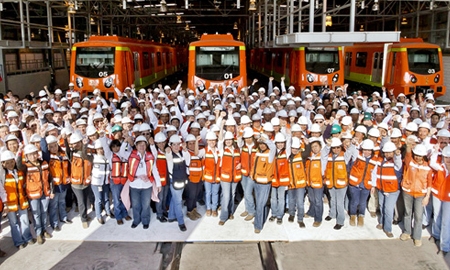 ALONSO QUINTANA | GENERAL DIRECTOR OF GRUPO ICA
Founded in 1947, Grupo ICA is the Mexican infrastructure and construction leader and name behind some of the most important projects, spanning from tunnels, roads and dams to hospitals, stadiums, cultural centers and public transport.
While its project portfolio stands as a testament to what a local company is capable of creating, its values reflect a social focus that has improved the lives of hundreds of thousands of Mexicans. Alonso Quintana, General Director of Grupo ICA and grandson of the original founder, discusses what some of these benefits have been and what his vision is for the coming years.
What role does infrastructure play in Mexico’s economic and social development?

Infrastructure development is a long-term investment in assets that will benefit the entire population. Having better roads and airports, more public transport, a better electricity network, strengthening the oil industry – all of this offers myriad benefits. To begin with there are the jobs created and the foreign capital invested that stays in the country.
Building a new airport for Mexico City will be a highly profitable and worthwhile asset, both economically and socially, because the existing airport is already too small. We have to improve our ports; a lot of ships arriving from overseas prefer to dock in the U.S. and enter Mexico by rail. So we need to improve our ports, so that more investment and services come and stay in Mexico.
On a tour round Mexico City it is easy to see all of Grupo ICA’s contributions to infrastructure. How does ICA contribute specifically to social development?

The mere building of these projects that are for the people – like building the subway system used daily by 400,000 people who previously had no transport. The recently finished line 12 joins Tlahuac with Mixcoac; the latter is a very isolated zone where people could spend up to three hours traveling to work. Now, it takes just half an hour to get downtown.
That’s just one example of the social benefit our projects provide – projects for the masses, like stadiums, airports, etc. We do this in a very institutional manner: we raise the capital and we distribute it among many funds. We also raise debt and emit bonds. There’s also massive participation. We negotiate the projects and we are capable of building and operating them once finished. We try to leave our seal of quality and guarantee that we finish everything we start on time to generate those badly needed public benefits.
The company’s results in 2012 were excellent, growing 12% from 2011. What is 2013 looking like?

Growth will be lower this year – a natural consequence of a change in government. The projects we were hired to do have got off to a slower start. For example, in Oaxaca we’re going to build two highways: one that goes from the capital to the touristy area on the coast, and one that goes to the industrial zone in Port of Salina Cruz.
And of course, we hope that with the new administration we’ll get new projects off the ground and the company’s financial results will swing back up.
Where do you see ICA in five years’ time?

We should see ICA maintaining a strong presence in Mexico, and growing in the countries we’re entering now: Panama, Peru, Colombia, Costa Rica, and of course, the U.S.
Mexico is one of the most advanced countries in the world in terms of public-private partnerships (PPPs). Here we have water treatment plants, roads, hospitals, etc. under this scheme and there’s already legislation in place under which investors can feel safe. So, Mexico’s PPP framework coupled with ICA’s vertically integrated expertise – we form partnerships, raise financing, build, operate the infrastructure, sell or float the asset to recycle capital and continue with other projects – should see our operations take off soon.
How important is the U.S. investor and partner to ICA?

The U.S. is the most technologically advanced country in the world. This is why 20 years ago we partnered up with Fluor Corporation, one of the largest engineering firms worldwide.
One of our weak points was in engineering procurement and construction (EPC) projects – these are industrial projects, like refineries and oil platforms. For these, you need a different type of engineering than you do for typical civil projects. Together with Fluor, we do a lot of work for Pemex.
In terms of corporate governance, the U.S. is also quite advanced. We consider ourselves to be a transparent, institutional company, and so for us being listed on the NYSE and complying with all of the U.S. corporate government regulations has given us a lot of exposure abroad. We’re handed some of Mexico’s most important projects and for this you need transparency and for investors to see that we do things correctly here, we follow the rules.
How are you helping create more “made in Mexico” human talent?

The ICA Foundation does exactly that: train engineers, seek talent and ensure that every year, more and better engineers graduate. My grandfather’s vision was to “Mexicanize” infrastructure. In the 1930s and 40s, foreign companies undertook the big projects like dams and roads. ICA was formed with this vision: that we can solve our country’s infrastructure problems better than a foreign company can.
ICA is the name behind some of Mexico’s most important projects. What legacy would you like the company to leave?

The company must transcend more than just its members; it has to spread a culture of service, impartiality, of teamwork and community. And as a company we go much deeper than what our financial figures may reflect. ICA’s value goes much further than mere numbers; it lies in the social significance of the number of people who have worked here, who have taken home good memories, that we are fair, responsible, that this is a great place to learn. All this makes the company much bigger.