Born in Egypt and Malaysia in the 1970s, Islamic finance has demonstrated that applying ethical principles to financial markets can provide a safeguard from the kinds of abuses that led to the current crisis.
Tweet

Ethical investing proves its worth and broadens its appeal.

In the wake of the global financial crisis of 2007–2008, conventional banks lost much more than their capitalization. The abrupt demise of institutions once seen as bulwarks of the international financial system, along with government bailouts of many others, eroded public trust in banks, regulators and auditors alike.

It took years of reforms to clean up bank portfolios and restore investor confidence. However, throughout the crisis, not a single Islamic financial institution required a bailout.

While market regulators in Europe and North America were stiffening the rules for capital adequacy and liquidity risk, Islamic financial institutions were seizing the opportunity to grow their markets at home and abroad. Today, the rapid spread of Islamic finance in its various forms - banking, sukuk issuance and takaful - has shown the appeal of ethical investing to Muslims and non-Muslims alike.

According to Tan Sri Dato’ Ahmad Fuzi Haji Abdul Razak, Secretary General of the World Islamic Economic Forum Foundation (WIEF), the interest in Shariah-compliant finance is extending around the world.

“The fact that Korea invited us to hold a round table on Islamic banking and finance, and that Japan and China want us to do that as well, means that there is a lot of interest and that they are opening their eyes to these opportunities,” he said.

“Once more non-Muslims are persuaded of the benefits of Islamic banking then I think we will be able to get more support from the governments of the countries concerned,” he adds.

Born in Egypt and Malaysia in the 1970s, Islamic finance has demonstrated that applying ethical principles to financial markets can provide a safeguard from the kinds of abuses that led to the current crisis. Industry advocates argue that financial products and services that comply with Shariah law have thrived precisely because they are based on principles, not solely on maximizing profit. The concept of shared risk and rewards, they say, instills a sense of community and promotes financial inclusion.

Though concentrated in the six countries of the Gulf Cooperation Council (GCC) and Malaysia, the Islamic finance industry’s assets have grown exponentially in recent years, from $200 billion in 2003 to $1.8 trillion by year-end 2013. The potential growth remains enormous, given that Islamic assets still represent only 1.25% of the global total.

The ethical, risk-averse nature of Islamic finance was central in shielding the industry from the global crisis. The banks were spared, for example, from the global contagion of toxic derivatives, largely because Shariah law requires profit to derive from shared business risk in real assets and prohibits speculation. In the end, Islamic banks as a whole suffered only a dent in their balance sheets, as a result of the slump in property markets.

The demographics are also on their side. With 1.6 billion Muslims spread around the globe, most of whom still don’t use banking services, 24% of the world’s people are a potential market. Islamic banks have access to a huge pool of potential savings waiting to be mobilized.

As global policymakers seek to press the “reset” button on capitalism, the Islamic finance industry has adopted a more aggressive expansion strategy. Having already succeeded in niche markets, the industry is now spreading its wings worldwide and entering new segments of finance.

Going global
The year 2014 saw the first issue of a sovereign sukuk by a non-Muslim country, a watershed event for the industry. The United Kingdom’s 200 million pound sterling issue had an order book of 2.3 billion pounds, showing the huge investor appetite for these securities. The UK issue was followed by similar ones in Luxembourg, South Africa and Hong Kong. Senegal, meanwhile, carried out the first sukuk issue by a sub-Saharan African country.

The United Kingdom has been a leader among non-Muslim countries in promoting Islamic finance. There are now six Islamic banks in Britain and 20 more that offer Shariah-compliant products and services. An Islamic index has been created on the London Stock Exchange and Islamic student loans have been introduced.

UK Minister of State for Foreign Affairs Hugo Swire called Islamic finance “a fast-growing sector that the British government considers of vital importance to the success and prosperity of the United Kingdom.”

The current year has seen Islamic finance further widening its reach in Muslim and non-Muslim countries alike. In April, a Shariah-compliant exchange traded fund (ETF) was launched in Malaysian equity markets and was listed on the Bursa Securities Market a month later.

In Turkey, meanwhile, President Tayyip Erdogan has said Islamic banks should raise their share of the banking market to 15-20% by 2023, up from the current 5%.

In Malaysia, the government in May issued a sukuk for $1.5 billion, a new global benchmark for the Islamic finance industry. It consisted of $1 billion for a 10-year trust certificate and another tranche of $500 million for a 30-year bond, a record term for a sovereign sukuk. The issue generated an order book of $9 billion from 450 global investors - 29% of them from the U.S. - again showing the widening investor interest in sukuk.

Sukuk today accounts for 15% of the Islamic finance market worldwide. During 2015, global issuance of sukuk is forecast to reach $120 billion, up from $114 billion in 2014. The appeal of the Islamic bond is such that it as of last year, it had been issued in 23 different currencies. 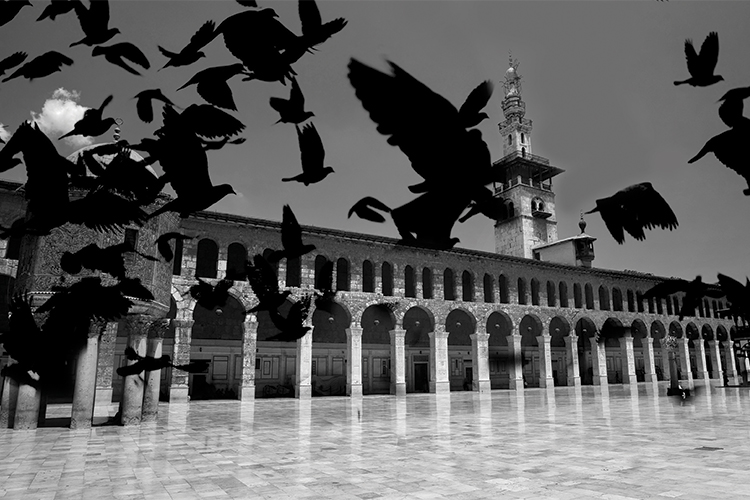 The United Kingdom has been a leader among non-Muslim countries in promoting Islamic finance. There are now six Islamic banks in britain and 20 more that offer Shariah-compliant products and services. 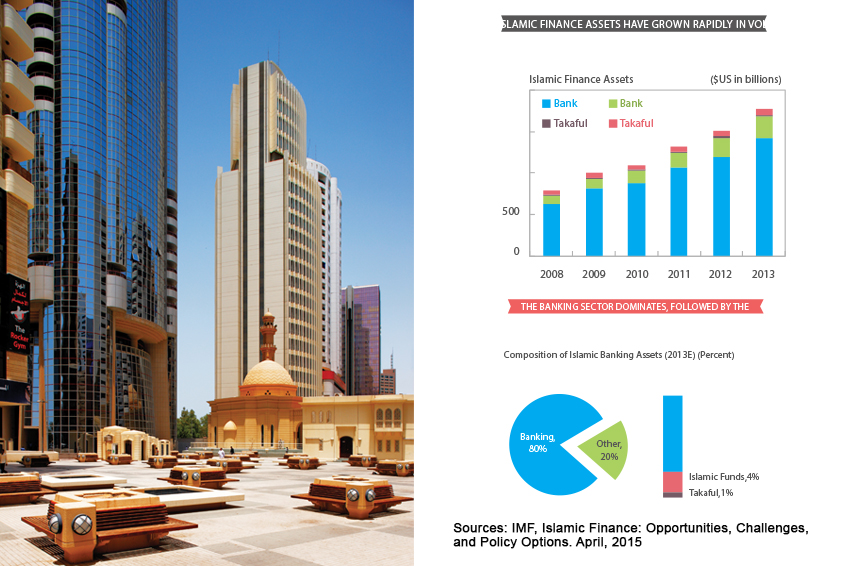 The principles of ethical investing could also prove powerful marketing tools in Western jurisdictions with large Muslim minorities such as the UK, France and South Africa.

Takaful Growth
With insurance penetration below 2% in the Middle East, the potential demand for takaful, or Shariah-compliant insurance, is vast. Companies vie to sell premiums to highly-educated young urban elites and use the concept of mutual aid as a marketing hook.

As with home mortgages, the Islamic answer to life insurance is slightly different. The members of a group pay contributions into a fund that then allocates money to those who have incurred losses. In the UAE, insurers have devised hybrid models for products that merge the mudaraba (trust financing) and wakala (agency arrangement) traditions. As a result, the market share for Islamic insurers in UAE has grown exponentially.

However, the challenges for the new, Sharia-compliant instruments include a lack of critical mass and economies of scale. Institutions in the insurance sector will increasingly need to develop family products to address country specificities. After all, the needs of a family in UAE may not be a good fit for another in Mauritania.

Sound new instruments
While high demand has driven the growth of Islamic bonds and insurance policies, the industry has also ventured into new segments of fee-based services: leasing, equity, investment, insurance and microfinance. The common denominator is that they must all be contract-based.

The range of Sharia-compliant products now includes profit and loss-sharing instruments such as the Musharaka, the sale of previously owned goods via regular installments. The equivalent of leasing goods such as industrial trucks and vehicles is known as Ijara.

These instruments were designed with Shariah precepts in mind, but the products are either debt-like or profit-and-loss-sharing models. In terms of new fee-based services, the safe-keeping contracts for current deposits known as Wadiah have lately taken money markets by surprise.

The latest array of Islamic finance instruments is designed for convenience. In the GCC, the Islamic credit card works by buying and selling commodities at international trading floors. The bank then extends the specific amount required by the consumer.

Despite its success, Islamic finance faces a number of challenges before it can realize its full potential. To begin with, the industry operates within a regulatory framework that was largely designed for conventional finance. More Islamic product standards and consumer protection measures will be key to managing risk.

The Islamic Financial Services Board (IFSB) organizes regular conferences to discuss risk management issues. With an emphasis on supervision and prudential regulation, the goal is to create sustained growth.

Accounting and auditing practices also pose a challenge. The implementation of the Basel III Accord will require Islamic institutions to meet new requirements for capital adequacy. The industry will need to determine which instruments qualify as tier 1 and tier 2 capital to meet the Basel III capital adequacy directives and liquidity coverage ratios.

The tax treatment of the different layers of transactions underlying Islamic finance instruments is also problematic. If unchecked, the fiscal gaps could set off a wave of tax arbitrage exploited by multinational enterprises, thus distorting global finance. Leveling the field for income, sales, VAT and transaction tax is on the agenda of the IFSB.

Export strategy
The Islamic finance industry has begun to explore the unbanked markets of North and Sub-Saharan Africa. (See the article on Seizing the Africa Opportunity).

The principles of ethical investing could also prove powerful marketing tools in Western jurisdictions with large Muslim minorities such as the UK, France and South Africa. In France, home to the EU’s largest Muslim community, the potential for Shariah-compliant real estate and capital investments is evident, but the regulatory hurdles are many.

Meanwhile, Malaysia remains the leader in macroprudential policy and financial inclusion. The story began in 1983 when market regulators and policymakers set up a target share of 20% for Islamic institutions by 2010.

“While Malaysia’s own experience and aspirations are to evolve into an international financial center, we will continue to promote a more inclusive financial system to support a more balanced growth,” Malaysia’s Central Bank Governor, Dr. Zeti Akhtar Aziz, said in a speech in Dubai in January.

Synergies across sectors from the bond market to insurance and real estate could be the magical recipe for the future. But the next phase of growth in Islamic finance will be driven by lifestyle changes. A burgeoning middle class in many Muslim-majority countries, armed with greater disposable income, will create a demand for more sophisticated consumer financial services. That is why the innovators of the Gulf Cooperation Council and Southeast Asia are looking at new ways to share in the rewards.