With estimated recoverable resources of 14 billion barrels of shale oil and around 95 TCF of risk recoverable free gas, Pakistan is working closely with international partners USAID and the Energy Information Administration (EIA) to boost production

With only two years at the helm the Nawaz Sharif government has taken numerous measures to create an investment friendly environment, already improving regulatory oversight and procedures that streamline and facilitate approvals.

Pakistan’s blessed geographical location has provided it with a bounty of opportunities for oil and gas exploration and development, with a sedimentary base of more than 800,000 square kilometers offering extensive possibilities for those operating in the upstream sector.

According to the shale gas study done under the USAID Energy Policy Program, Pakistan has tremendous shale gas/oil resources in the middle-lower Indus basin alone. The risked recoverable free gas is estimated at 95 TCF with significant upside from adsorbed gas estimated at over 6,300 TCF. The same study has confirmed that the middle-lower Indus basin has approximately 14 billion barrels of risked recoverable oil in place.

Minister of Petroleum and Natural Resources, Shahid Khaqan Abbasi, highlights that it is important to note that Pakistan shared its geological data as part of the U.S. Geological Survey (USGS) from 1955 to 1970, while India and China were not on the U.S. bloc during the cold war. It had obtained multi-million dollar grants from the U.S. to the set up a geological survey of Pakistan, including development of laboratories and facilities in all over the country.

Oil and Gas Development Company Limited (OGDCL) is one such company making the most of Pakistan’s natural resources and one of the flagship firms for the country’s exploration and production (E&P) sector.

It posted record profits after tax last year that surpassed the PKR 100 billion mark ($956 million) and in July reported that it had made a substantial discovery in the Punjab region of the country, suggesting the potential of the country’s E&P sector.

“There is a huge opportunity in Pakistan as far as shale gas is concerned. We don’t have a lot of technical expertise, we don’t have experience, and we’ve got the formations so the shale is there, the gas is there and obviously Americans are experts in this matter.”

At present, no shale gas is being produced in Pakistan and significant work is required to kick start this high potential energy source.

“It must be underscored that shale gas cannot be discredited because of its huge potential, estimated to be enough for the next 70 years. Shale gas can be a real game-changer for Pakistan. The most glorious advantage of shale gas is the potential massive job opportunities for skilled and semi-skilled Pakistanis,” says Mr. Abbasi.

OGDCL is not alone in Pakistan’s upstream sector however, with another major E&P player being Pakistan Petroleum Limited (PPL). Syed Wamiq Bokhari, Managing Director and CEO at PPL, believes the country is well placed to capitalize and perhaps most importantly make cost-effective investments that will reap benefits in the longer term.

“If you work for the brave, today, there is an opportunity. In our industry, returns are after several years, it is a long cycle. If you are willing to invest now, your investments will be substantially lower, because the costs have gone down. We are seeing around a 20% reduction in most of our drilling and facilities, so this is very positive for those willing to be brave right now and make investments,” Mr. Bokhari explains.

PPL is well known as the operator of Pakistan’s largest gas reserve, the Sui field, which has been operational since 1952, but it has a further 47 exploration blocks and operates from 27 of them.

“We are very different in our operations. When I was working outside Pakistan and looking into some investment opportunities in Pakistan, we did an analysis of all the companies here, and at that time I identified PPL as the partner of choice, and now I’m sitting here,” says Mr. Bokhari.

It is also keen to expand from its exploration and production activities and is well placed to increase its position as a provider of oil and gas to meet rising domestic demand.

From an international viewpoint, PPL is a mid-sized oil company, but what most people do not realize is that in terms of barrels of oil equivalent (BOE), Pakistan is on the same level as Indonesia. PPL is close to doing 180,000 BOE per day, which is no small feat. The difference is that Pakistan has mostly a gas mix and the market is relatively close. Mr. Bokhari explains, “The reason is very simple: when the country came into existence, they found a huge field. For many years they thought all their needs were met, but with the population growing so fast, those needs require more energy.”

“If you work for the brave, today, there is an opportunity. In our industry, returns are after several years, it’s a long cycle. If you are willing to invest now, your investments will be substantially lower, because the costs have gone down”

Another major E&P player is the state-owned Government Holdings PL (GHPL). It currently has more than 60 development and production leases and 50 exploration licenses, highlighting the extent of potential across the country and an underlying optimism in the industry.

The firm is 100% owned by the Government of Pakistan and operates under the Ministry of Petroleum and Natural Resources, and had a mandatory 5% interest in all exploration licenses granted by the government during the exploration phase which was to be carried by other joint venture partners. GHPL holds working interest in a total of 120 joint ventures and is currently in partnership with 27 national and international oil firms, making it one of the largest E&P companies in Pakistan.

Political developments are also helping to cast optimism over Pakistan’s oil and gas sector, and the recent landmark nuclear deal signed between Iran and global powers could open up more possibilities for OGDCL and PPL.

With fewer Western sanctions, a much-discussed pipeline between the two countries could finally come to fruition, “Iran is our neighbor, so there is a natural partnership already,” Mr. Bokhari says. “They have also developed their service sector quite a bit, so opening the borders between these two countries will allow a bigger participation of that sector in both regions. Our guys can work over there; their guys can work over here, so there is an advantage for both sides.”

The ambitious goals of OGDCL see its vision go even further afield for future growth prospects. It has around $2.5 billion to invest in expanding the company’s reach, and Managing Director and CEO of OGDCL Zahid Mir is clear that moving out of Pakistan will be a key plank to the company’s strategy.

Government Holdings PL currently has more than 60 development and production leases and 50 exploration licenses, highlighting the extent of potential across the country and an underlying optimism in the industry

“We want to make the company reach new levels of growth, and in order to do that, there is absolutely no other way but to go international,” he says. “Oil production in Pakistan ranges from 60,000 barrels to a maximum of 110,000 barrels. When we find oil, they are small reservoirs; you keep on finding those small fields but there is no game changer.

“My opinion is that there may be a game changer if we are able to find something big offshore, but it is not happening so far. So, if we want to grow from our current size we need to go international. We are looking at different places such as Africa, Kazakhstan, and Turkmenistan.”

While there is little doubt that oil price volatility is providing considerable challenges to the industry – particularly for those operating in the E&P sector – Mr. Mir says his company is concentrating on a longer-term strategy and not basing its future on short-term forecasts and predictions. 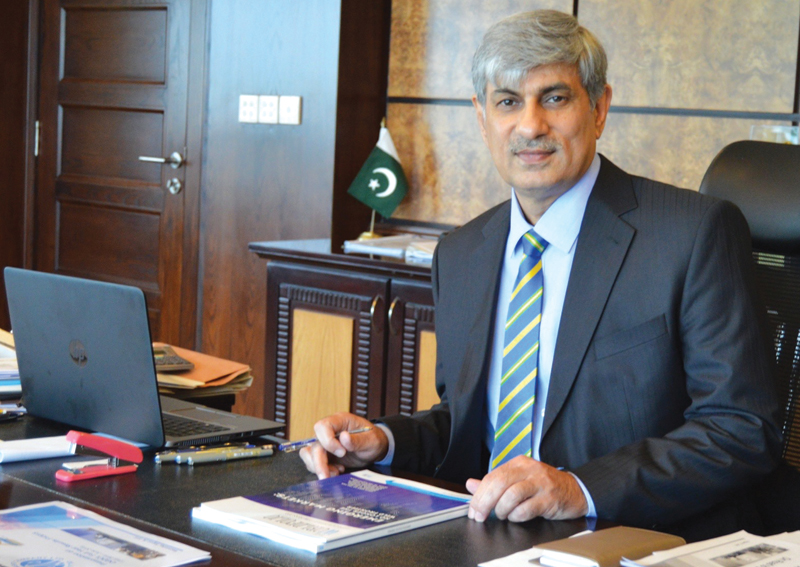 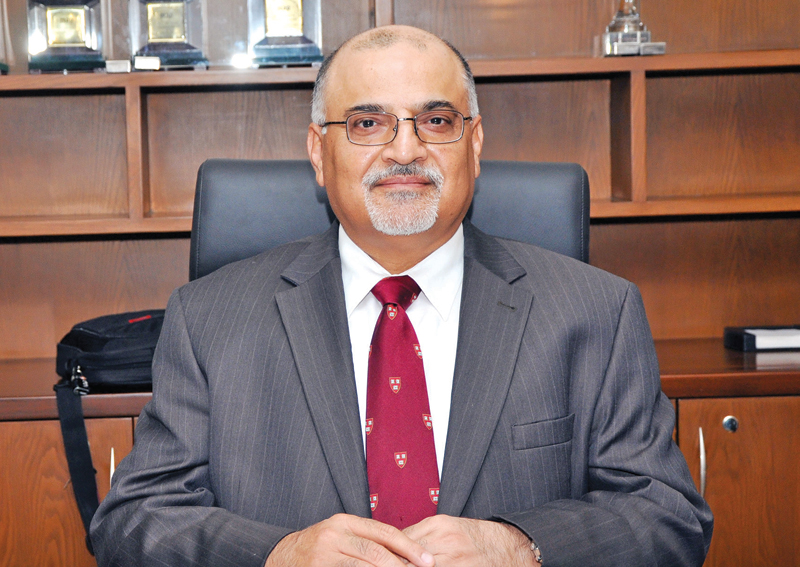 “Regardless of the prices we do not stop our on-going projects; we are already committed and we will finish them,” he says. “But for the new ones, we try to use efficiently the existing facilities to the maximum capacity, reduce unnecessary items and costs.”

OGDCL tests each prospective project out against different economic scenarios and if they remain viable against a price of $40 per barrel – allowing the company to at least break even – they will progress.

Mr. Mir adds that while the price fall is inevitably having an impact on the sector, it is also providing opportunities by allowing companies such as his to take advantage of low development and drilling costs.

“Our cost of production is not too much, we talk about $6-7 a barrel, which means that we can survive low prices, but for the new projects we have to make sure that we will have an acceptable return on investment. Nevertheless my perception is that prices will go up, I don’t share the widespread negative outlook for the oil and gas sector,” he explains.

“Shale gas can be a real game-changer for Pakistan. The most glorious advantage of shale gas is the potential massive job opportunities for skilled and semi-skilled Pakistanis”

Indeed, Pakistan’s oil and gas infrastructure is in need of substantial development and it remains a “limiting factor” according to Mr. Bokhari, meaning investment into the service sector has the potential of substantial returns. Forging links with international groups, particularly those in the U.S., could help to propel growth, while the recent nuclear agreement with Iran is being seen as a game changer for the prospects of the Pakistani industry.

Although OGDCL is already looking at investing its own money abroad, it is clear that the country’s oil and gas sector is also enticing international partners, particularly from the U.S. The Pakistani government has made it clear they will consider investment in pipeline infrastructure, and Mr. Mir admits that working together on projects – including on shale gas exploration – could provide a boon for both the companies investing and Pakistan itself.

“I am very keen to work with American companies and utilize their expertise in shale gas extraction,” he says. “There is a huge opportunity in Pakistan as far as shale gas is concerned. We do not have a lot of technical expertise, we do not have experience, and we have got the formations so the shale is there; the gas is there and obviously Americans are experts in this matter.”

While such partnerships could offer the potential for considerable returns, environmental concerns are also being addressed. OGDCL has forged agreements with Pakistan’s government to develop local eco-friendly projects, and it has also set aside PKR 2 billion on schemes that focus on developing roads, schools and hospitals. Such a strategy highlights that despite global price volatility, Pakistan’s E&P sector remains committed to long-term growth that benefits not just its stakeholders but also the country as a whole.

Mr. Abbasi adds, “In the PML-N manifesto, we promised to address the challenge of unemployment. Using energy as a driver of economic growth, and utilizing indigenous resource must be on the top agenda for energy security.”