The Red Sea is playing a major role in achieving the government’s target of reaching 20 million tourists by 2020 and is becoming the year-round destination of choice for foreign arrivals to Egypt, especially those seeking a premier luxury option with diverse sports and entertainment offerings

The charms of the Red Sea, both natural and manmade, are undoubtedly helping Egypt’s tourism industry recover from the dip in visitors it has seen in recent years. Egyptian authorities are restoring confidence in European markets and adding weight to attracting new audiences to experience the country’s culture, heritage and world-class resorts.

The Red Sea accounted for more than 60 per cent of the 9.9 million visitors to Egypt in 2014. According to the Central Agency for Public Mobilisation and Statistics, the number of arrivals to the country totalled 4.8 million in the first half of 2015, an increase of 8.2 per cent compared to the same period last year.

“The Red Sea must play a major role in attracting 20 million tourists by 2020, as one of the many destinations in Egypt. The goal to reach $26 billion in revenues from the tourism sector by 2020 will mean we have to increase expenditure per night to $100 (£66), up from $75 in 2014. In order to achieve this, we need to promote high quality destinations such as El Gouna,” says Hisham Zaazou, Minister of Tourism.

“For 26 years, El Gouna has been a leader as a fully integrated tourism destination in Egypt and has helped promote the Red Sea in the European market in general and the UK market in particular.”

Russia accounted for the largest share of visitors to Egypt in 2014, with around 3 million. Eastern Europe (including Russia) as a whole comprised 45.1 per cent of the total number of visitors. Western Europe travellers made up 31.6 per cent of the total. The UK and Germany were the largest sources of tourists from the region, with 930,000 and 850,000 respectively. Saudi tourists provided the largest percentage of tourists coming from the Middle East, with 26.1 per cent, while rising interest from Chinese, Japanese, Indian and North American travellers also augurs well for the government’s 2020 target.

Reflecting the taste for sustainable communities in harmony with the Red Sea’s surroundings, El Gouna boasts a mix of traditional and modern elements and a variety of architectural styles, from the white villas surrounding The Abydos Marina to the traditional modernism style found in the Nubian Villas neighbourhood.

El Gouna offers a wide range of accommodation with 16 hotels suited to match every mood and budget. Be it an intimate inn within the waterfront convenience of the Marina, a boutique hotel with traditional architecture, or the luxury of a five-star beach front resort.

El Gouna has two centres of activity: Abu Tig Marina, which impresses with exclusive shopping and gourmet dining options, and its downtown area, which is in the style of a small Upper Egyptian village and is home to shops, cafés, bars, restaurants and a free open-air cinema.

For the active, sports, outdoor activities and excursions abound. World-class kite surfing and windsurfing are for the taking as its spacious beaches, perfect winds and shallow waters draw aficionados in their droves. Thrill seekers will also be glad to discover Sliders cable park, a wake park dedicated to wakeboarding and waterskiing. 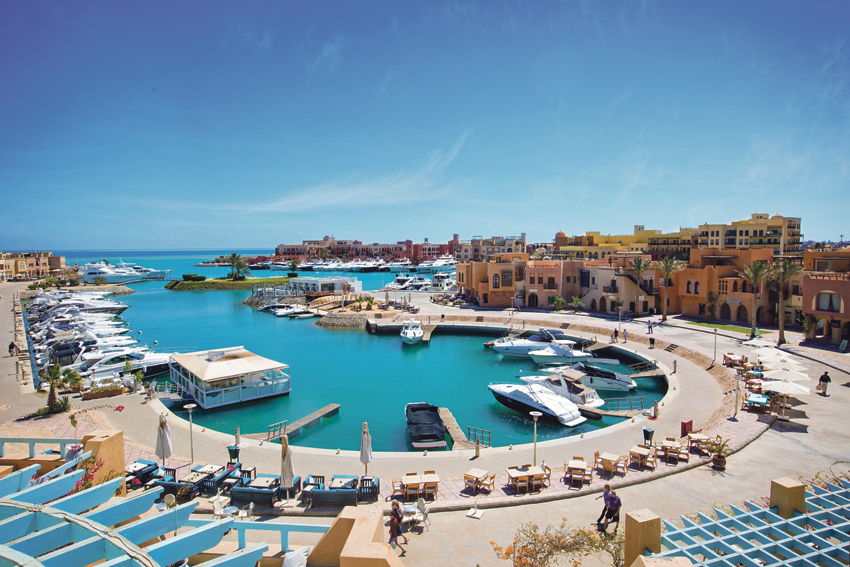 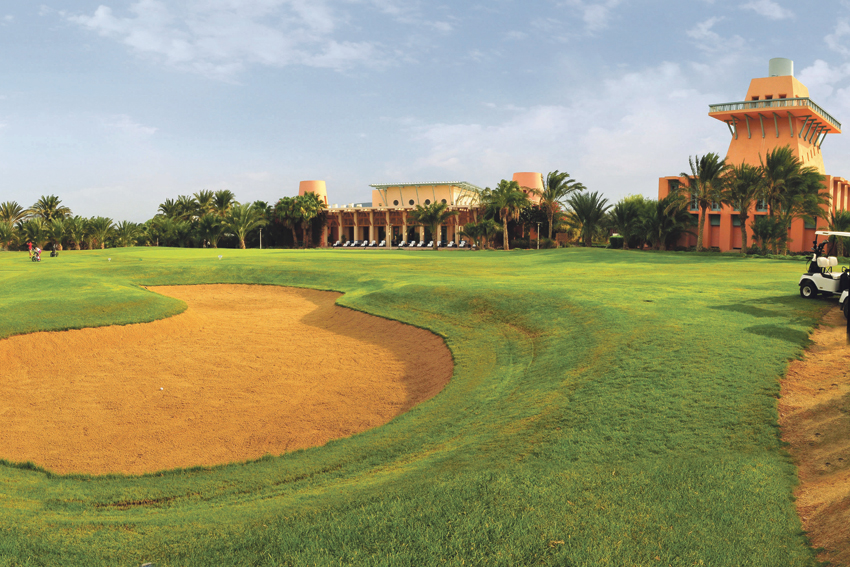 Indeed being a luxury town, El Gouna also offers two 18-hole championship golf courses, all of which are set against a stunning backdrop of impressive mountains and endless sea views. Aside from water sports and golf, visitors can also enjoy horse riding and excursions to the Eastern Desert to visit a typical Bedouin village.

But the vision of Orascom Hotels and Development (OHD), a leading developer of fully integrated communities both residential and destination based, was not just to create a seasonal holiday destination, but to turn El Gouna into a thriving urban centre, whose culture and character would be shaped more so by its permanent residents – which now number 24,000 – than holidaymakers.

“Our vision is to target a fully fledged town while creating interesting and diverse projects,” says Dr Manal Hussein Abdel Razek, Executive Chairperson of OHD. “We strive to create developments that provide people with the ideal quality of life, customer satisfaction and return on investment.”

Going beyond the role of developer, OHD acts as an administrative body for the town, overseeing services such as maintenance and security, and outsourcing services such as schools, a hospital, and waste management to business partners.  The company also aims to promote the destination as an ideal host for business conferences, medical conferences, sports events and concerts.

Along with El Gouna, the group has built Taba Heights on the Sinai Peninsula, and Hurghada’s first gated residential community, Makadi. But what makes El Gouna different from any other destination in Egypt?

“We are constantly upgrading and challenging ourselves to push the boundaries of the definition of successful and environmentally friendly communities. We offer all types of services, from tourism, education, architecture and light industries to water sports, commercial centres, offices and conference facilities, as well as a world-class Marinas – we have it all! We are the first green touristic destination. We strive to remain at the forefront of the real estate industry, in terms of design, architecture, planning, and environmental awareness.”

El Gouna’s sustainability efforts have led it to being officially recognised as Egypt’s most environmentally friendly and one of the world’s top green holiday destinations. From incorporating energy saving features to recycling and reusing precious resources, its management has worked hard with local hotels, businesses, residents and visitors to maintain, protect and preserve the town’s unique environment.

The Global Green City Award was given to El Gouna in August 2014 by the Global Forum on Human Settlements and is supported by the United Nations Environment Programme. The accolade goes to cities with significant environmental sustainability measures and efforts in place and El Gouna is the first town in the Middle East and Africa region to be awarded this honour. Its designs incorporate physical disability access in hotels and pathways, and create bicycle and walking lanes and waste recycling facilities as part of its aim to eventually become a carbon-neutral town.

OHD demonstrates how social responsibility demands on developers in Egypt can produce further benefits. “Now more than ever, Egyptian companies are taking on a more active role in corporate social responsibility and including it in their core business operations,” says Dr Razek. “Companies understand that their clientele are morally conscious and responsible individuals who want to know that the companies they support show a sense of responsibility towards the communities where they operate.

“At OHD, we take it a step further. We have a robust strategic business model that takes into consideration the environmental impact of its core operations, and thus strives to be environmentally sustainable in all business decisions. To quote the chairman of our holding company, Mr Samih: ‘One does not have the right to cover even one square metre of land with anything that will add to the demise of the planet.’

“As such, we see that OHD’s social and environmental responsibility should not be a secondary or tertiary output but a direct result of its business activities. We strongly believe that we can have a positive and sustainable impact on our community by doing what we do to the best of our capabilities, which is achieved by creating both dollar value and social value from our core businesses.”

Endeavours such as OHD’s transformation of a swathe of open desert on the Red Sea’s coastline into a luxurious, sustainable and environmentally sensitive tourism destination in just two decades will undoubtedly keep Egypt as one of the world’s top tourist attractions and inspire others to follow suit.