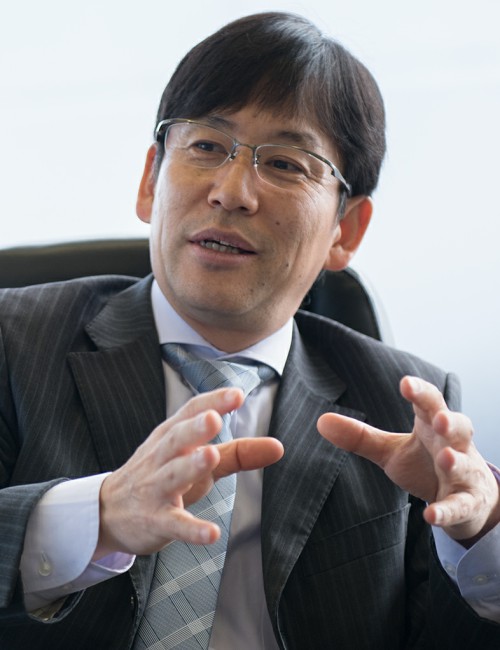 Keishiro Takase has an engineering degree and formation from Kanagawa Institute of Technology.

He worked as a professional football coach for numerous years, gradually stepping up from coaching elementary school students to coaching a professional team.
Keishiro Takase joined LION POWER in 2001. As the second-generation president, his management has been focused on leading organization growth and human resource development.

Graduated from Kanagawa Insutitute of Technology with a degree in Electrical and Electronic Engineering.

Keishiro Takase worked as a professional coach at Shonan Bellmare, a Kanagawa-based football club that competes in the J. League.
He was in charge of coaching the U-10, U-15 and U-18 teams, before becoming the second team manager of the first squad.
For the last two years of his football carrier, he was the coach of a professional team before retiring in 2001.

After joining Lion Power in 2001, Keishiro Takase focused on expanding his company’s portfolio by engaging in the development and sales of original products.

Design an manufacture of automation equipment tailored to the medical industry, such as preparation devices for blood tests and autosamplers.

What have been the main lessons you have learned in your career and how do you implement them in your management?

Football taught me a series of life lessons, and my time as a coach allowed me to grasp the important aspects of coaching and management. One of the secrets I learnt is that “in times of trouble, you must return to the basics.” The higher the level of competition, the higher your understanding and accuracy of the “basics” must be.

After entering the corporate world and becoming a businessman, it was easy to deal with ‘black and white’ problems. However, I learned that small and medium-sized businesses encounter a series of ‘gray’ problems, and handeling them well is the responsibility of the top management.

This was taught by my mother who showed me what my father was doing.

The same is true for football coaches and small business presidents, but it is the most important tactic to bring players and employees to the same vector.

Throughout my life I’ve had the unmeasurable chance to always receive help from the people around me.

During my football coaching period, the experienced coaches that surrounded me were well aware of best practice methods, and knew how to get the best quality out of their players. Luckily, they pro-actively taught me their methods and I exported some of them to the corporate world.

When I became president of Lion Power, the environment of the corporate world in comparison to the Football one was quite different.

At 37 years old, I became the president of Lion Power and had the great luck of being surrounded by experienced seniors who shared their industry knowledge with me. It is common for second-generation president to be surrounded by senior executives who are experts in their particular fields.
Being able to count on the expertise and knowledge of these seniors, without them feeling pressured by my nomination as president, was a true chance for it allowed them to share with me withhold holding back.

I recent years, it has become a habit of mine to consult with people I met, including young presidents who share a similar story to mine. By meeting top executives who work hard for the success of their company, I feel truly stimulated and I am able to learn about their ambitions, and turn it into a source of inspiration and energy,