Full speed ahead for Thai ports at Bangkok and Laem Chabang

The country’s two most important ports, Bangkok and Laem Chabang, are undergoing upgrades and modernization programs to improve efficiency and raise their competitiveness 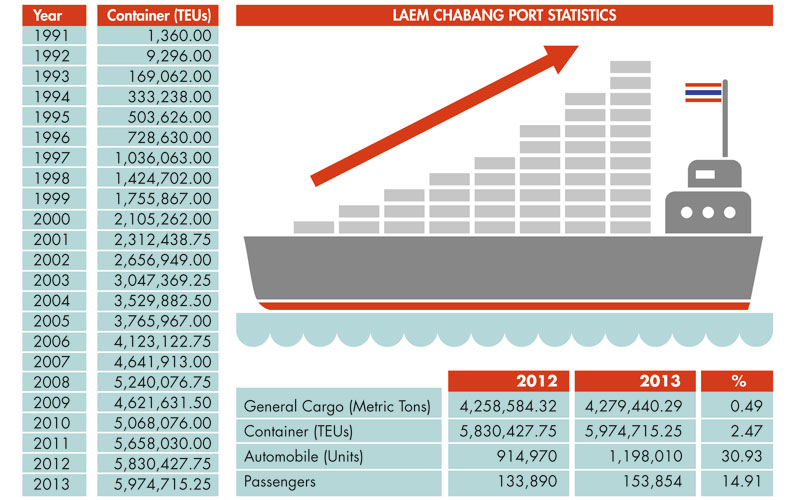 At the center of the Asean bloc lies Thailand, and with nearly 1,900 miles of coastline and more than 2,400 miles of waterways, it is poised to become the international gateway to Asia, and potentially, Europe.

In order to capitalize on its strategic position and strengthen its economy the country is looking to improve connectivity not just within Thailand but with its Asean neighbors as well.

As part of the country’s efforts in attracting foreign investment, a massive overhaul of its transport infrastructure is being proposed. The ambitious $75 billion project would incorporate improvements to roads, rails and waterways. The project would also include high-speed train connections from Thailand to China.

A significant part of the discussions have been centered on moving goods more efficiently through the region. Sea shipping remains the most popular option for trading among the Southeast nations, making Thailand’s two largest ports among the busiest in the world. The Port Authority of Thailand (PAT), is playing a key role in ensuring the country’s ports can keep up with steadily growing traffic demand, and preparing for a potential swell once the Asean Economic Community (AEC) comes into effect.

“As a core organization on waterway transport, PAT has carried out its mission in conformance with the government’s strategy as well as developing the country’s logistics system in the overall scheme in preparation for responding to any change which will occur in the future, particularly, in joining AEC in 2015,” says Lt. Ittichai Supanakoon, RTN, Managing Director of PAT.

The second-largest port in the country, Bangkok Port – also known as Klong Toey – handles more than a quarter of Thailand’s container volume. The port’s depth, which ranges from 8.5 to 11 meters, accommodates ships up to 12,000 tons and 172 meters in length. Located on the west side of the Chao Phraya River at the entrance to Prakanong Canal, in the Klongtoey District of Bangkok, operations are divided into two areas: the west quay, which handles conventional bulk cargo, and the east quay for container cargo.

More than 80% of the cargo that comes through the port is in containers. There is plenty of space to accommodate them as the port has a total capacity of 1.34 million TEU, according to Bangkok Port’s Managing Director, Lt. Songtham Chantaprasit, RTN.
Bangkok Port is undergoing security and hardware upgrades; over 70% of the port’s equipment systems are new, says Lt. Chantaprasit, and attention has turned to upgrading the port’s IT systems to improve efficiency.

“We are checking cargo coming in and out of the customs area and there is also a container terminal management system, where we use enhanced technology to keep track of the containers in the port area,” he adds.

While Laem Chabang port has knocked Bangkok out of the top spot in terms of the volume it handles, the port remains a vital fixture for local businesses in the area.

“Bangkok Port is centrally located and it serves a lot of small factories around the city. Transportation costs associated with Laem Chabang port are higher and 90% of cargo is transported by road,” says Lt. Chantaprasit.

Its central location makes it an attractive site for developers and a study is under way to examine the potential for turning the land around the port into shopping malls and hotels.

Currently Thailand’s busiest port, Laem Chabang handles more than 7 million TEUs a year, but can handle up to 10.8 million and plans are underway to increase that capacity to 18 million TEUs.

The port, with a depth of 12 meters, is located in the Chon Buri Province, covering an area of around 2,536 acres.

Expansion plans for Laem Chabang will make it the most modern and active port in Thailand, says the port’s Managing Director, Lt. Sutthinan Hatthawong, RTN. “We continue to focus and emphasize quality service as well as efficiency,” he says. “Less time in the port can reduce transport costs.”

Another notable feature about Laem Chabang is security, the best in Asia, says Lt. Hatthawong. “We have a lot of stringent and certified security systems within the port. To maintain security, we support training courses in neighboring countries and we invite them to learn from us,” he comments. “We worked with the U.S. Embassy and Homeland Security for many years to become the best port in Asia.”

It is expertise that Lt. Hatthawong hopes to share with neighboring countries in order to standardize shipping protocols across the Asean bloc, a task that becomes all the more vital once the Asean Economic Community (AEC) agreement allowing for the free flow of goods and services among the Asean bloc, goes into effect.

“All ports in the AEC should be operating on the same standards,” says Lt. Hatthawong. “We try to use our knowledge and expertise to help other ports to improve their policies and regulations.”

Some of the standards being implemented by the Port Authority of Thailand at both the Bangkok and Laem Chabang are green, aimed at minimizing the ports’ impact on the environment. This includes changing the type of vessel fuels used from traditional fuels that emit greenhouse gases and pollutants, to cleaner and more cost-effective alternatives. The vehicles used in and around the ports run on compressed gas, in an effort to reduce fuel emissions.

Expansion plans for Laem Chabang are aimed at turning it into a gateway port for the Greater Mekong Sub Region, which would mean competing with Singapore for shipping business.

According to the Thai Board of Investment, the port currently handles 54% of Thailand’s overall exports and imports; however, Lt. Hatthawong claims it could handle more than 90% of the country’s volume. The expansion would include a new deeper wharf that would directly serve large vessels.

To help mitigate the high cost of fuel associated with road transport, the plan includes the construction of twin railway tracks that would provide a direct rail link to the port from the Northeast, and in an effort to relieve traffic congestion, roads to the port and a mass public transit system are also proposed for development.