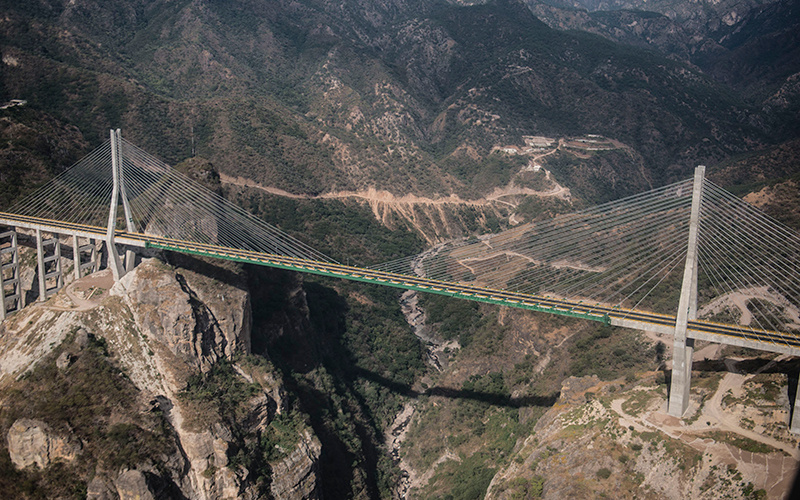 THE HIGHEST CABLE-STAYED BRIDGE IN THE WORLD, THE BALUARTE BRIDGE STRADDLES THE BORDER BETWEEN SINALOA AND DURANGO AND FORMS PART OF THE $2.2BN DURANGO-MAZATLÁN HIGHWAY
SHARE

Mexico is getting an extreme makeover with one of Latin America’s largest investment programs ever. A few weeks after the last bit of enabling legislation was passed in August 2014, President Enrique Peña Nieto committed to one of the most ambitious undertakings in which a leader puts his administration’s credibility and future legacy on the line: a comprehensive and cost-effective upgrade of the country’s ageing infrastructure.

“This is the roadmap that shows us the way to the modern, competitive country we all want Mexico to be,” is how the President sees the spending program intended to create thousands of jobs and give a boost to virtually all sectors of the economy by enhancing the country’s competitiveness and productivity.

Roadways, rail transport, seaports and airports. Gas pipelines, power transmission grids, container terminals. Bus stations, even. You name it and it will probably appear as one of the 743 items on the government’s to-do list – just so long as it is new, functional and incorporates the appropriate technology.

And, yes, the overall price tag is formidable: to the order of $596 billion, including construction of the new state-of-the-art Mexico City airport. It will be money well spent.

An estimated 63% of that funding will come from the federal and state government, with the remainder provided by private capital, whether as foreign direct investment, public-private partnerships (PPPs), or other modalities that will be flexibly structured. All ventures will be protected by a favorable regulatory environment and the guarantees enshrined in Mexico’s new PPP laws, which are considered as equitable and comprehensive as in any comparable Latin American country.

In the World Economic Forum’s Global Competi-tiveness Report for 2013-2014, Mexico came in 66th place among the 148 countries evaluated for the overall quality of their infrastructure, trailing nations like Greece, Rwanda and Kazakhstan. Its deficiencies are especially conspicuous in the country’s road network, which is to receive priority attention during the first phase of the implementation process.

Actually, Mexico has a lot of roads for a country its size and, for the most part, their layout allows for good inter-city and regional connections. The trouble is that only 40% of those roads are paved, and those that are paved are likely to be in urgent need of grading, resurfacing or replacement.

Then there are new links such as the Durango-Mazatlán Highway. It may seem perverse to build a route that requires 61 tunnels along its 140-mile length, to say nothing of 115 bridges – including Puente Baluarte, the world’s highest suspension bridge. But on its inauguration on October 17 2013, the segment completed the Matamoros-Mazatlán corridor – also known as the Interoceanic Highway – that cuts about six hours from the travel time between Mexico’s Atlantic and Pacific coasts. An engineering challenge, but one with a payoff that could end up giving the Panama Canal a run for its money.

More funding is earmarked for the railroad sector, where it is hoped that the speed, efficiency and convenience of modern trains will attract passengers to routes such as Mexico City-Querétaro via fast train, or Mexico City-Toluca. The Transpeninsular fast train, slicing across the Yucatán peninsula between Campeche and Tulúm, will take visitors to such emblematic but hard to get to inland destinations as Izamal or Valladolid. The plan also calls for electric trains for the larger cities and a significant investment in rolling stock for moving merchandise by rail.

In his 2014 State of the Union address, the President said that various existing metro lines of Mexico City’s crowded underground system would be extended deeper into the suburban belt around the capital, adding an extra 30 miles of coverage that will serve an estimated 9 million commuters.

Mexico’s seaports are another strategic area coming in for major upgrades as the country advances its plans to become a bicoastal logistics hub. Veracruz may be the country’s oldest and largest port, but its capacity to handle modern-day container shipping needs to be expanded and equipped with advanced monitoring and operation systems that require an outlay of some $1.8 billion.

Slicing the pie chart makes it clear that slightly over half the total investment will be absorbed by 462 initiatives in the energy sector.

Most of that money will end up at the state energy company Pemex, to cover the preliminary phases of identifying and developing the potentially huge oil and gas reserves in the deep waters of the Gulf of Mexico, and a series of modern refineries intended to reduce Mexico’s imports of processed petroleum derivatives.

A pipeline grid conveying natural gas closer to its industrial and domestic end-users will also contribute to presidential plans to set the conditions for a more balanced energy sector.

Green power also has its place on the agenda, which contemplates 16 solar farms in the arid deserts of the north. An allocation of $2.5 billion will cover the start-up costs of six wind farms, in addition to two hydroelectric plants and a modern system of drainage tunnels for the Greater Mexico City region. Dams, aqueducts and water treatment plants also in short supply in different parts of the country will be built.

To be fair, massive investment in healthcare facilities got under way with the previous administration, which built or reconditioned several thousand hospitals and clinics. The President has made every effort to ensure that in addition to the facilities themselves, the product they deliver has all the funding it needs to attend to a growing population, with universal healthcare in all of Mexico’s states as his ultimate goal.

Will he be able to implement these projects? Will the political, social and legislative reforms that sustain them hold up under the burden of expectations that they generate? Mr. Peña Nieto is convinced they will. “The foundations are in place,” he has said, “so let’s get busy building the nation we want for ourselves.

“One thing that must be clear to us is that this is not the country it used to be. This is the Mexico that dared to embrace change.”