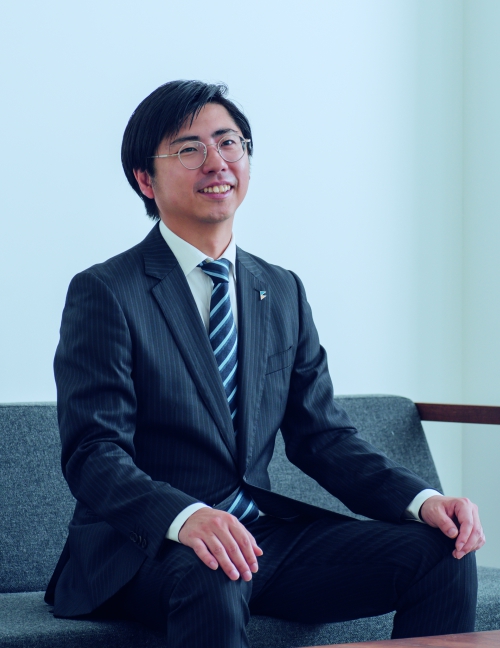 At age 36 the father of one boy and girl

Fujitaka Akira was appointed President of FUJITAKA, a towel manufacturer and wholesaler, on October 21, 2019. Since then he has witnessed many changes in the local towel industry while gaining first-hand experience and know-how at various departments within the company. "Innovation is an absolute requirement to succeed in today’s towel market. “We will continue to do so and establish the FUJITAKA brand and gain more widespread recognition.”

In 2006, at the age of 22, he joined the DOSHIN SENKO dye works, a member of the FUJITAKA group. In addition to production management, he learned what monozukuri is through hands on experience.

He joined FUJITAKA in 2007 and was assigned to the product planning department, where he gained know-how in a series of tasks for producing products from scratch, such as design, yarn procurement, and negotiating with wholesalers. His personal connections with material manufacturers and wholesalers established at that time have continued to this day. "The few years of experience in the product planning department was extremely valuable to me. It was highly condensed with some of the most important and fundamental elements of quality towel production," he recalls.

In addition, he studied the Toyota Production System, which FUJITAKA then introduced as a company-wide policy, and focused on implementing it in all operations. He took the lead and worked on improvements through improving efficiency and quality control activities. At the same time he continued his product planning work. He describes that period as "a difficult time but immensely rewarding."

After he became Director in 2015, FUJITAKA decided to introduce new automatic production equipment such as sewing and cutting machines. He toured overseas and visited machine manufacturers and companies involved in producing cutting edge equipment. From that experience he implemented improvements to FUJITAKA’s own production system. Although he was now a board member, he continued his involvement with planning and developing products, saying it was just something “he wanted to do."

He became more directly involved in management with his appointment to Senior Managing Director in 2017, and upgraded the office computer system. He says “Such enterprising spirit has led to a more flexible production system now."

He often exchanges opinions with young members of the Imabari Towel Industrial Association and feels that the good times in the Imabari towel industry are coming to an end and they are facing a new, difficult phase. He is convinced that neither the local towel industry nor FUJITAKA should rest on their laurels and must continue to come up with more creative reforms.

Utilizing the manufacturing and sales system he has built, he will continue to meet the competition head on in the always changing, always challenging market.

Message from the President

FUJITAKA TOWEL is a towel maker that boasts a history of more than one hundred years in Imabari – a region of Japan well known for its towel production.

Shortly after the company was founded, we gained the reputation as “FUJITAKA – the Technological Company.” We have always led the towel industry, producing famous brands of towels and registering various patents.

Furthermore, focusing on in-house production we have an integrated production system from yarn dyeing to finished product.

Every day, our employees bring pride to the craft of manufacturing the most innovatively designed towels, and FUJITAKA's mission is to provide our customers with the safest and highest quality towels.

We will continue to contribute from Imabari and to the whole country and world through our towels, based on the idea that a sustainable society cannot exist without the richness of its employees and the development of the towel industry in our production area. .